As an artist, Howard McCormick, is best known for his murals, wood engraving and illustrations.  His birthplace was . His early art studies began at the Indiana School of Art with William Forsyth and were continued at the New York School with William Merritt Chase. Later, he moved on to the Academie Julian Paris in 1895 where he studied with Paul Laurens. He was a member of the and exhibited at the Art Institute of Chicago in 1913 and the Salons of America in 1934.  In his travels to he spent time on the Navajo Reservation where he created murals of the Apache, Hopi and Navajo in the natural setting. His museum murals prominently depict Southwest Indians and may be viewed in the: American Museum of Natural History in New York, the State Museum in Trenton, New Jersey, the Museum of Science and Industry in New York and the Mayo Clinic in Rochester, Minnesota.

McCormick’s library murals, created in 1936, are preserved in the north and south marble arches and depict imagery of scholarly activities. The mural in the south arch is titled “The Torch of Education/Knowledge”. The mural in the north arch was first titled the “Fire of Ambition” but is better known as “Birth of an Idea.” The medium used to create the murals was gesso, the Italian word for “board chalk”. It is a powdered form of the mineral calcium carbonate used in a variety of art forms.

McCormick’ sister, Grace McCormick Wilson, was married to Mayo Clinic Consultant, Louis B. Wilson, the first pathologist on staff as well as the first Director of the Mayo Graduate School of Medicine.

The Names on the Ceiling of Mayo Hall - Plummer 12

One of the special architectural features of Mayo Clinic in , , is the carved and painted beamed ceiling in the main reading room, Mayo Hall, of the Medical Library located in the historic 1928 . Dr. Henry Plummer, for whom the second Mayo Clinic building was named, was an early associate of the Mayo brothers and was the chief architect of the 1914 clinic building, the 1928 building (now the Plummer Building) and Mayo's medical record system. Dr. Plummer, who also designed the original library floor in the 1928 building, selected the names of prominent physicians and scientists to be memorialized on the ceiling beams of the reading room. After Dr. Plummer's death in 1936 and that of Will and Charlie in 1939, the names of the Mayo brothers were added to the ceiling. To find out more about the ceiling and the names included click here.

The floor of the lobby has three low relief bronze medallions inserted in the terrazzo tiles. The central plaque is the early Greek goddess Minerva, patroness of Wisdom, Science and the Professions. The small figures in the background symbolize the progress of learning from Babylonian times through the Egyptian, Greek and Italian to modern science, depicted by the figure of Benjamin Franklin with the key and kite investigating lightning. The symbols on the border are the twelve signs of the Zodiac.  The plaque on the left represents Apollo, the Sun God: Patron of Medicine. The plaque on the right represents Hermes, the mythological guardian of the Lamp of Knowledge and God of Science and Invention.

The center medallion measures 44 inches in diameter and the other two are 28 inches.

The hall is named in honor of Dr. Henry S. Plummer, staff physician and codesigner of the building.  It was initially used as an assembly room for Mayo staff meetings.  The room is paneled in English Oak with a portrait of Dr. Plummer above the marble fireplace.  The stately room is now used primarily as a quiet reading space for library patrons and reserved on occasion for special video taping, photo shoots, and VIP gatherings. 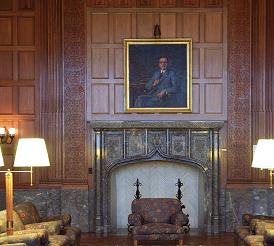 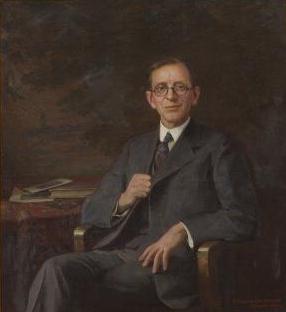 Though little is known about the stained glass window panes in the east side of the hall,
the human subjects depict a variety of occupations from different walks of life in traditonal English form. 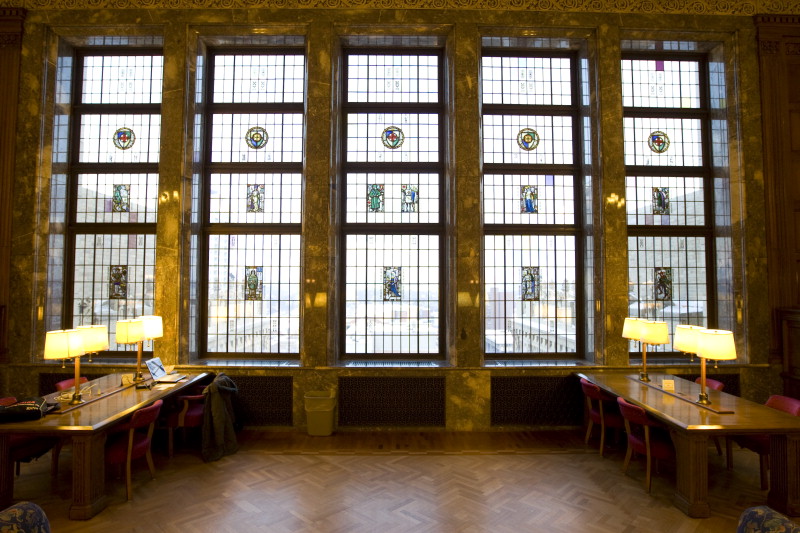