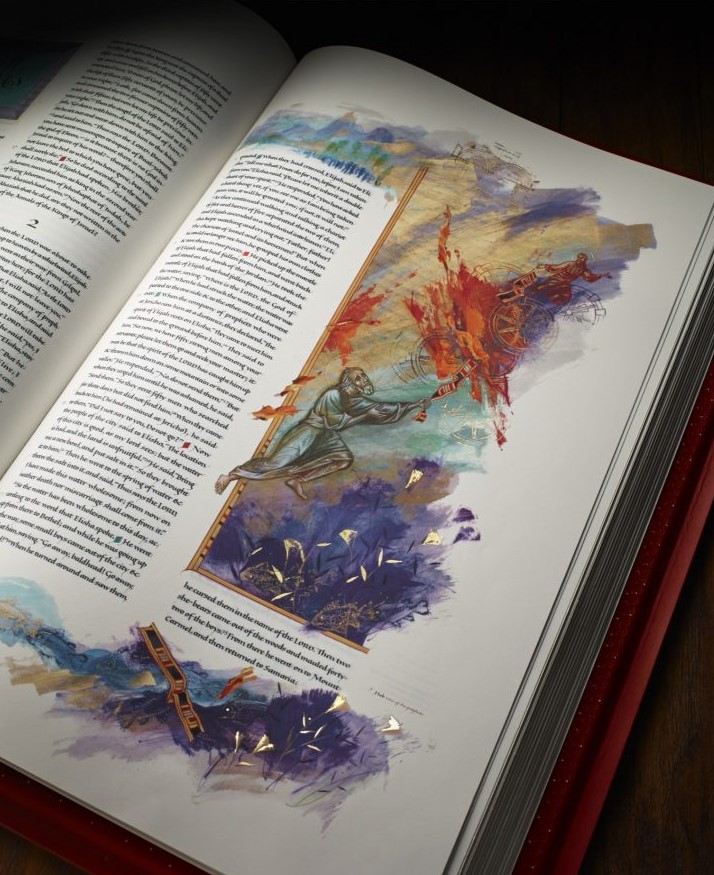 In purples, greens and gold, the illuminations in Historical Books explore the relationship of God’s people to God’s promise. Marginal text treatments trace the Israelites’ rise and fall as they move through the era of judges and kings, with prophets guiding the way. The cover motif, from the Ark of the Covenant illumination, was inspired by the pilgrims’ cathedral in Santiago de Compostela, Spain.

HISTORY OF SAINT JOHN'S BIBLE AT MAYO CLINIC IN FLORIDA

In April 2010, Mayo Clinic received a museum-quality reproduction of The Saint John's Bible called the 'Heritage Edition' thanks to the generosity of patients Stephen and Barbara Slaggie. And that the reproduction was "one of only 299 signed sets, each with seven volumes, which are replicas of the original."

The first volume of Mayo's set is displayed in Mayo's Hall of Benefactors in the Siebens Building. A second can be found in the Francis Tower Lobby of Saint Marys Hospital (across from the hospital's original stone cross). A third sits near the Charlton Registration Desk at Rochester Methodist Hospital. A fourth is placed on the concourse level of the Mayo Clinic Building in Arizona. A fifth can be found on the Mayo Clinic Health System in Eau Claire campus (thanks to the generosity of community leaders and other benefactors). And as of Thursday June 6, 2013, thanks again to the continued generosity of the Slaggie family, a sixth volume of the Saint John’s Bible was installed on Mayo's Florida campus. (There’s also another book in storage.)

The volume residing in Florida, the "Historical Books," covers Joshua, Judges, Ruth, 1 and 2 Samuel, 1 and 2 Kings, 1 and 2 Chronicles, Ezra, Nehemiah, Tobit, Judith, Esther, and 1 and 2 Maccabees. It was installed in the Cannaday Building, near the Coggin Atrium. Like the other volumes at the other campuses, its pages will be turned "regularly" so as to display any one of these sections on any given day.