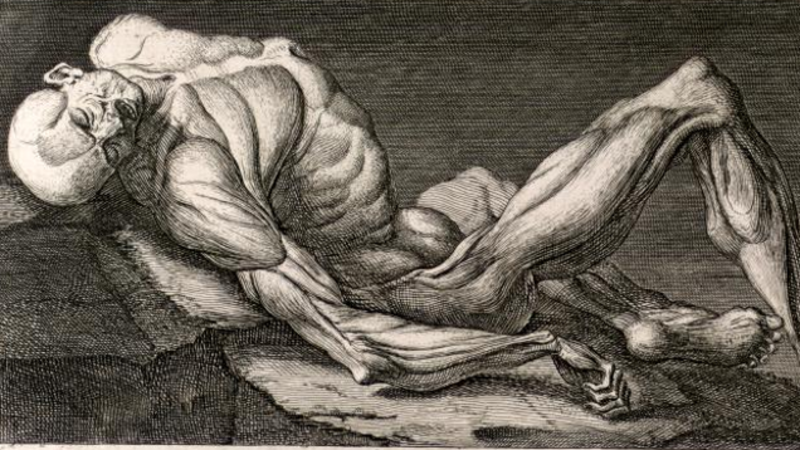 This exhibit was created to mark the 90th anniversary of the Mayo Clinic Libraries (1907-1997). The exhibit highlights the role that donations have played in developing the History of Medicine Library. In the beginning of the 20th century, the early partners in the practice, the Mayo brothers, among others, contributed their personal medical books and journals as a nucleus of the Medical Library. Many have followed in this tradition, the most recent of whom, Dr. Anthony H. Kelly, donated a collection of 130 rare anatomy books dating from the 16th to 19th centuries. The tabs above will allow you to browse some examples of this wonderful collection

16th Century Works
Modern anatomy originated with Andreas Vesalius who first provided a look inside the human body based on dissection. 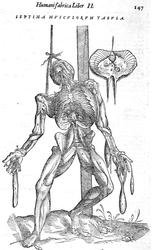 Andreas Vesalius (1514-1564) is considered the founder of modern human anatomy -- prior anatomical study had been based mostly on animal cadavers. He carefully supervised the artists who created accurate and artful illustrations. The artistry reflects the influence of Titian, whose school was a dominant influence in Venice at the time. Although no one has been able to identify the artists who contributed to this work, it is probable that Titian himself drew some of the plates.

This posthumous 1568 edition on display is smaller than earlier editions and is based on woodcuts reproduced by Johann Criegher. It joins the library's copy of the first edition of 1543. 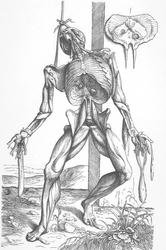 Vesalius was known for the quality of woodcut engravings employed in his work. The wood was probably soaked in hot linseed oil before being used, thus allowing fine cuts to be made. The blocks lasted with little deterioration for over 400 years, and they were used for impressions as recently as 1934 in a cooperative venture between the New York Academy of Medicine and the University of Munich. The superb clarity of the illustration in this facsimile demonstrates the quality and durability of the original blocks. Unfortunately, the blocks were destroyed during bombing in World War II.

Juan de Valverde (1525-1587) borrowed heavily from Vesalius because, in his own words, "[Vesalius'] illustrations are so well done it would look like envy or malignity not to take advantage of them." (Refer to the corresponding plate in the preceding texts on display.)

Valverde's editions sold well in Spain because they were smaller and less expensive than early editions by Vesalius, and they were written in Spanish rather than Latin. Despite the popularity of these works, many were critical of Valverde's accuracy as an anatomist.

The illustrations are fine examples of copperplate engravings.

17th Century Works
Works displayed represent a wide range of topics from herbs and plants to dragons. They also include fine examples of woodblock printing.

Hieronymus Fabricius (1533-1619) succeeded Vesalius as chair of Surgery and Anatomy at the University of Padua and was known for his accuracy and thoroughness. Fabricius, however, felt that Vesalius emphasized structure excessively and his [Fabricius'] approach to anatomy intended to balance considerations of structure with function, making physiology teleological rather than experimental.

Fabricius was well known as a surgeon as well as an anatomist. Galileo was one of his patients.

The existence of dragons is documented in this text by the well- known surgeon Ambroise Pare (1510-1590). The caption on page 48 reads:

Pliny says that there are dragons in Ethiopia that are 10 coudees long [the distance from the elbow to finger tip]. In India some have been found that are 100 coudees long, and some fly so high in the air that they capture flying birds."

John Gerard's (1545-1612) text includes excellent examples of woodblock engravings. This volume includes over 2,700 illustrations. Because of his extensive work in this field, the genus Gerardia was named in his honor.

In addition to his work as a surgeon and author, Gerard maintained a medicinal garden with over 1,000 species of plants.

BARTHOLIN, Thomas. Bartholinus Anatomy: Made From the Precepts of His Father, and From the Observations of All Modern Anatomists, Together With His Own. London: John Streater, 1668.

Thomas Bartholin (1616-1680) was the first to describe the entire lymph system, and he confirmed the existence of the thoracic duct.

Bernardino Genga (1620-1690) is known for anatomical as well as artistic excellence in his works. This illustration exemplifies how art and science coalesce in anatomy.

18th Century Works
The authors of these works have differing reputations; some for excellence or new techniques, and others for errors and plagiarism.

Carlo Cesi (1626-1686), a painter and copper etcher, maintained an academy for painters in his home in Rome. He is best known for providing anatomical information for artists. Some critics have noted inaccuracies in his work.

This page shows a strange combination of poorly rendered surface anatomy and musculature. The deltoids and the scapulas are incorrectly drawn.

BROWNE, John. A Compleat Treatise of the Muscles, as They Appear in Humane Body and Arise in Dissection; With Diverse Anatomical Observations Not Yet Discover'd. London: T. Newcombe, 1681.

John Browne's (1642-1702) text on muscles was successful in terms of being reprinted four times; however, it is also the subject of accusations of plagiarism. The illustrations bear resemblance to plates published by Guilio Casserio. One of Casserio's plates is shown below at right for comparison.

In addition, the text is similar to writing published by William Molins. An exerpt from a microfilmed copy of Molins's MY

KOTOMIA (1648) is also shown at right below for comparison.

Giovanni Domenico Santorini (1681-1737) is considered one of the most exact anatomists of his era, and, as a result, a facial muscle (risorius), a pair of cartilages (cornicula) of the larynx, and other veins and ducts have been named after him.

Unfortunately, his career was cut short by his untimely death, and his chief work, the text on display, was not published until 38 years after his death. Some consider this work one of the best of the 18th century.

William Cheseldon (1688-1752) was distinguished as a surgeon in several large hospitals in London.

The title page of this work illustrates the camera obscura technique that he employed. The concept, a forerunner of the modern camera, dates back to antiquity. The image of the object being drawn is projected through a small hole onto a canvas where it can be traced at its natural size.

Bernhard Albinus (1697-1770) is credited with beginning an epoch during which investigations were carried out with near perfection. He insisted on incorporating observations from multiple specimens, not just one body; he claimed the composite was a closer representation of the truth.

Albinus approached his subjects like an architect might. He insisted on accurate measurements and employed an approach whereby the artist stood varying distances from the skeleton and viewed it through grids of netting to obtain proper perspective and proportion.

Pietro Cortona (1596-1669) was a painter and architect. There is little known about the anatomist who was involved in this work and the text is considered to have little value. While many admire Cortona's artistry, one critic claimed he "renders anatomic figures repulsive" because he places the open cavity within the context of a living person.

Haller is not only considered a significant anatomist, he is also known for the diversity of his interests and his high level of productivity. In addition to medicine, he studied mathematics and botany, and he wrote poetry.

19th Century Works
Color, lithography, and other new techniques demonstrated in these works contribute to the advancement of the art and science of anatomy.

Andrew Fyfe (1754-1824) was an extra-academic demonstrator of dissection at Edinburgh University where he won awards for his drawings.

William Hunter (1718-1783) was one of the first men-midwives in England, a role that was not well received by midwives or physicians. Despite his training as a physician and surgeon, he became one of the most successful accouchers in the area. He attended at least one of the deliveries of the wife of King George III.

His practice and anatomical knowledge became part of the early practice of obstetrics. He gave lectures and demonstrations throughout his career. Some of the illustrations in the text displayed are life-size and one source refers to them as "artistically perfect."

ELLIS, George Viner and G.H. Ford. Illustrations of dissections in a series of original coloured plates, the size of life, representing the dissection of the human body​. London: Walton, 1867.

The text on display is considered a classic work of Christian Braune's (1831-1892). He developed a special technique that involved freezing specimens. Braune represented three planes of the body in this work by first drawing on tracing paper laid over a thin layer of ice covering the delineated structure.