W. Bruce Fye Center For the History of Medicine: The Wilson Club and Surgeons' Club

By the 1930s the number of Mayo fellows had increased substantially and there was a need for a place where they could go to relax, eat and socialize.  Mayo Foundation had acquired the former Lawrence Hotel in 1932 and made it available to the Association of Fellows as their headquarters.  Located at 212 2nd Street SW, across the street from the south entrance of the Mayo Building, the structure was an ideal place for a clubhouse.  On December 29, 1934, the Association of Fellows Executive Committee announced in “The Clinic Bulletin” that the clubhouse was nearly finished and invited members of the Mayo Staff and their families to visit that afternoon between 3 and 5 o’clock.  The Association voted to name the clubhouse the Wilson Club in honor of Dr. Louis B. Wilson, then director of the Mayo Clinic School of Graduate Medicine Education. 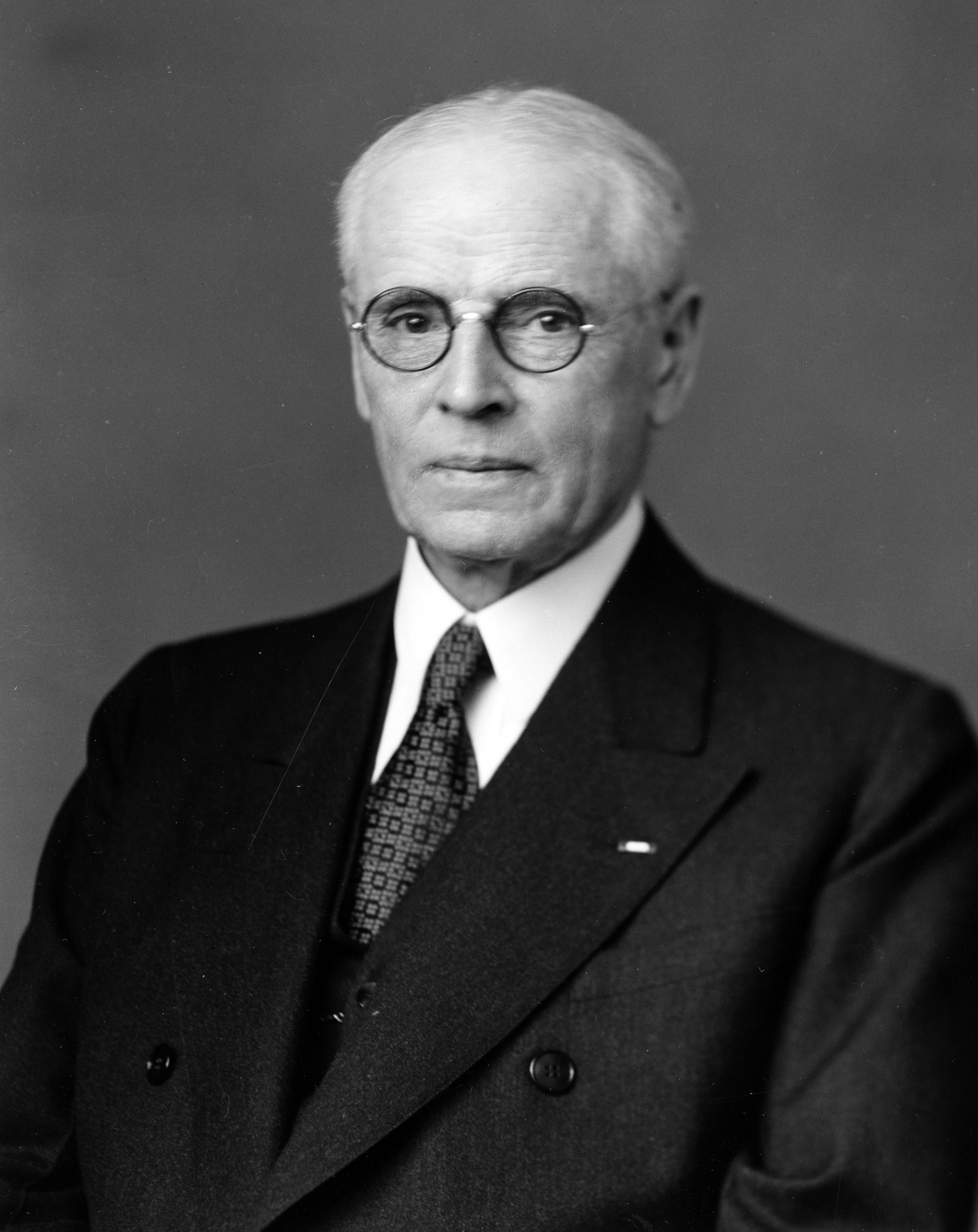 Dr. Louis B. Wilson joined the Mayo staff in 1905 to organize and develop pathologic, clinical and experimental laboratories.  He also served as the first director of Mayo Clinic School of Graduate Medical Education (1915-1937).  Photograph dated 1937 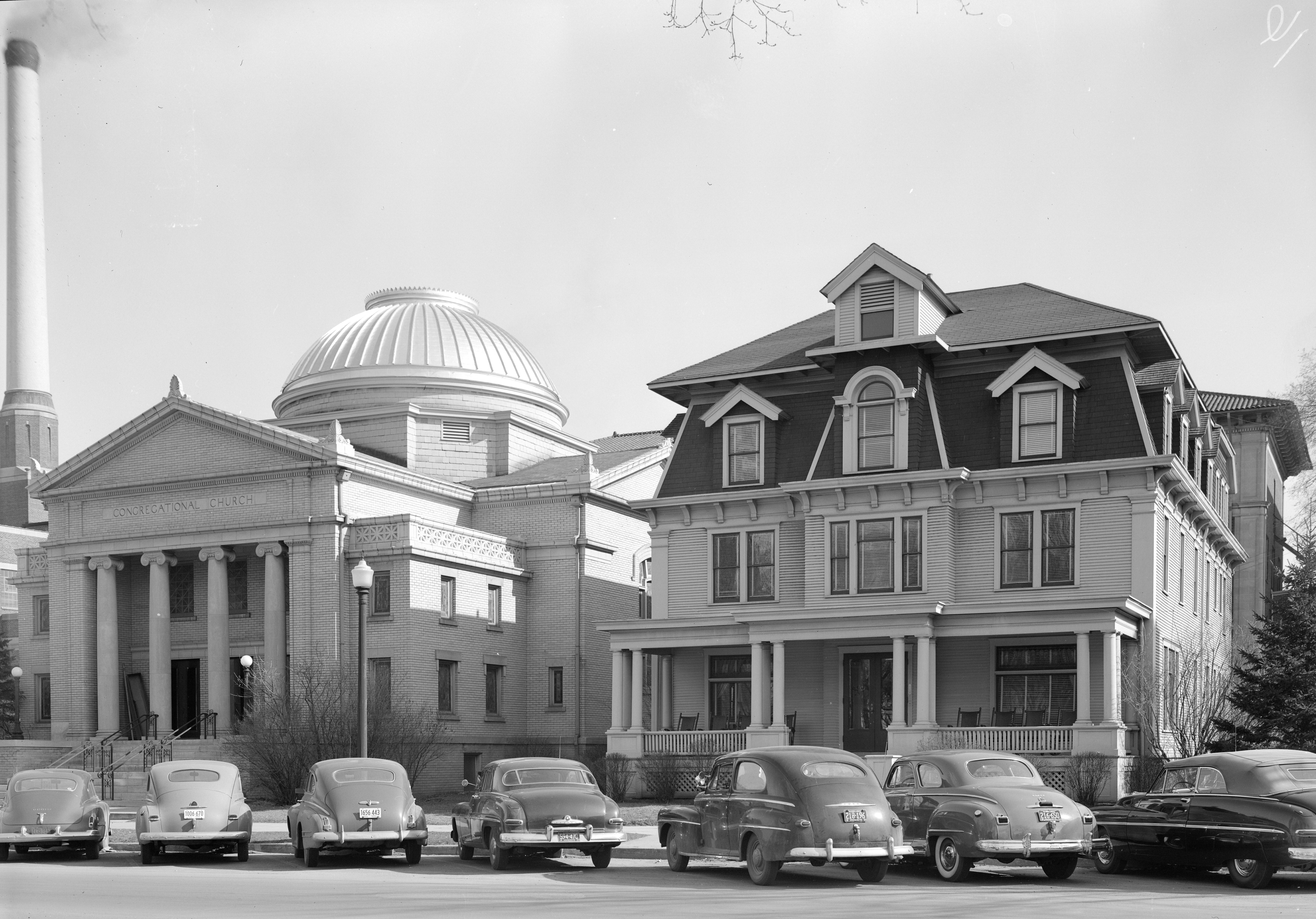 The house on the right became the new clubhouse.  Formerly the Lawrence Hotel, it was remodeled in late 1934 and named the Wilson Club.  Located at 211 2nd Street SW, the clubhouse was conveniently situated across the street from the Mayo Building’s south entrance. Photograph dated 1955

After hiring an attendant who also served as cook, waiter and manager, the clubhouse began serving a cafeteria-style breakfast and lunch at a reasonable price.  In addition to a dining room and lounge, the club featured a small library, record player, game rooms and even a darkroom for developing film.  The Wilson Club also offered affordably priced accommodations for a small number of unmarried fellows. 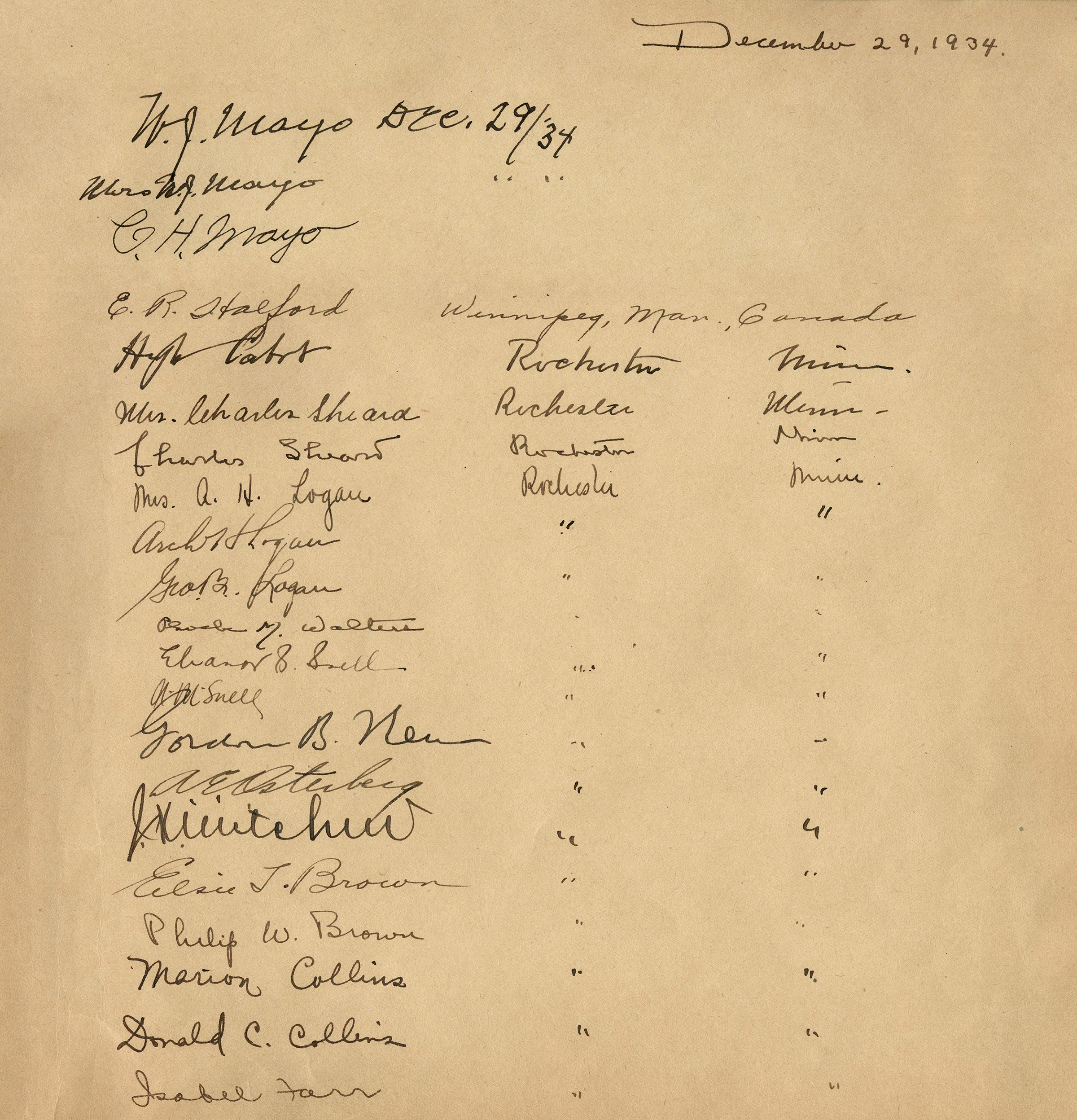 The Association of Fellows invited Mayo staff and their families to visit the new clubhouse on December 29, 1934.  The guestbook pages from that date include the signatures of Dr. and Mrs. William J. Mayo and Dr. Charles H. Mayo, among others. 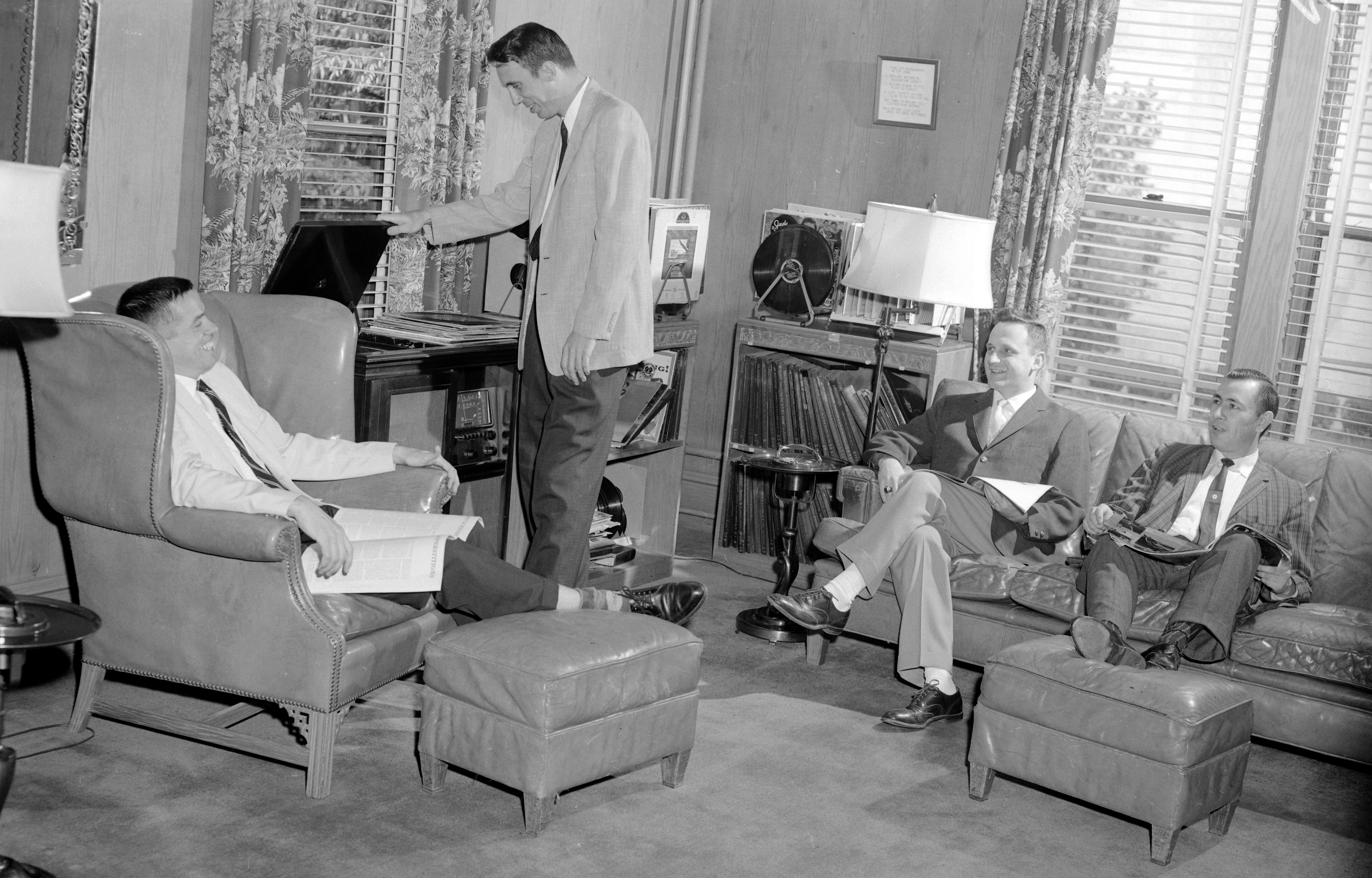 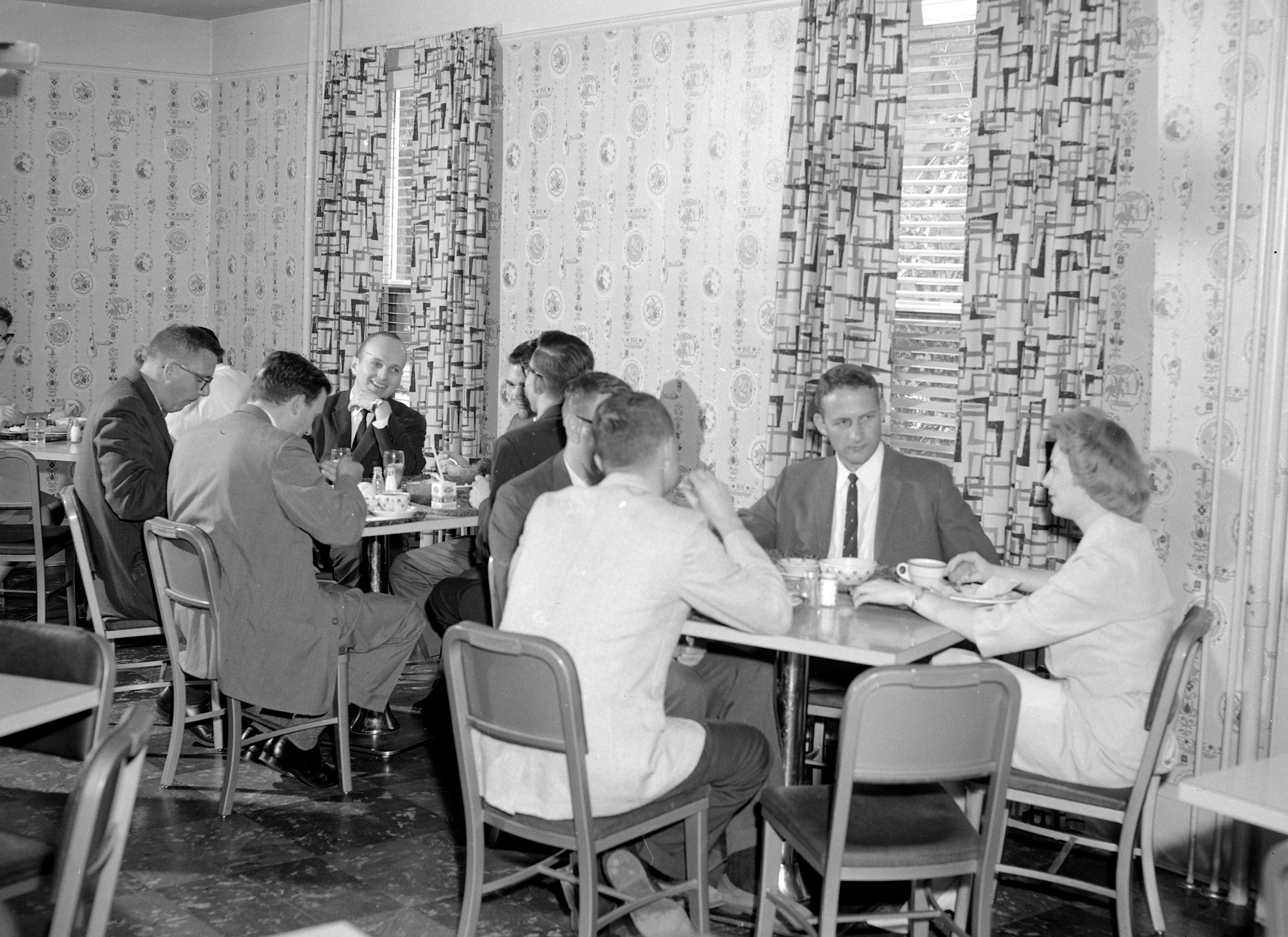 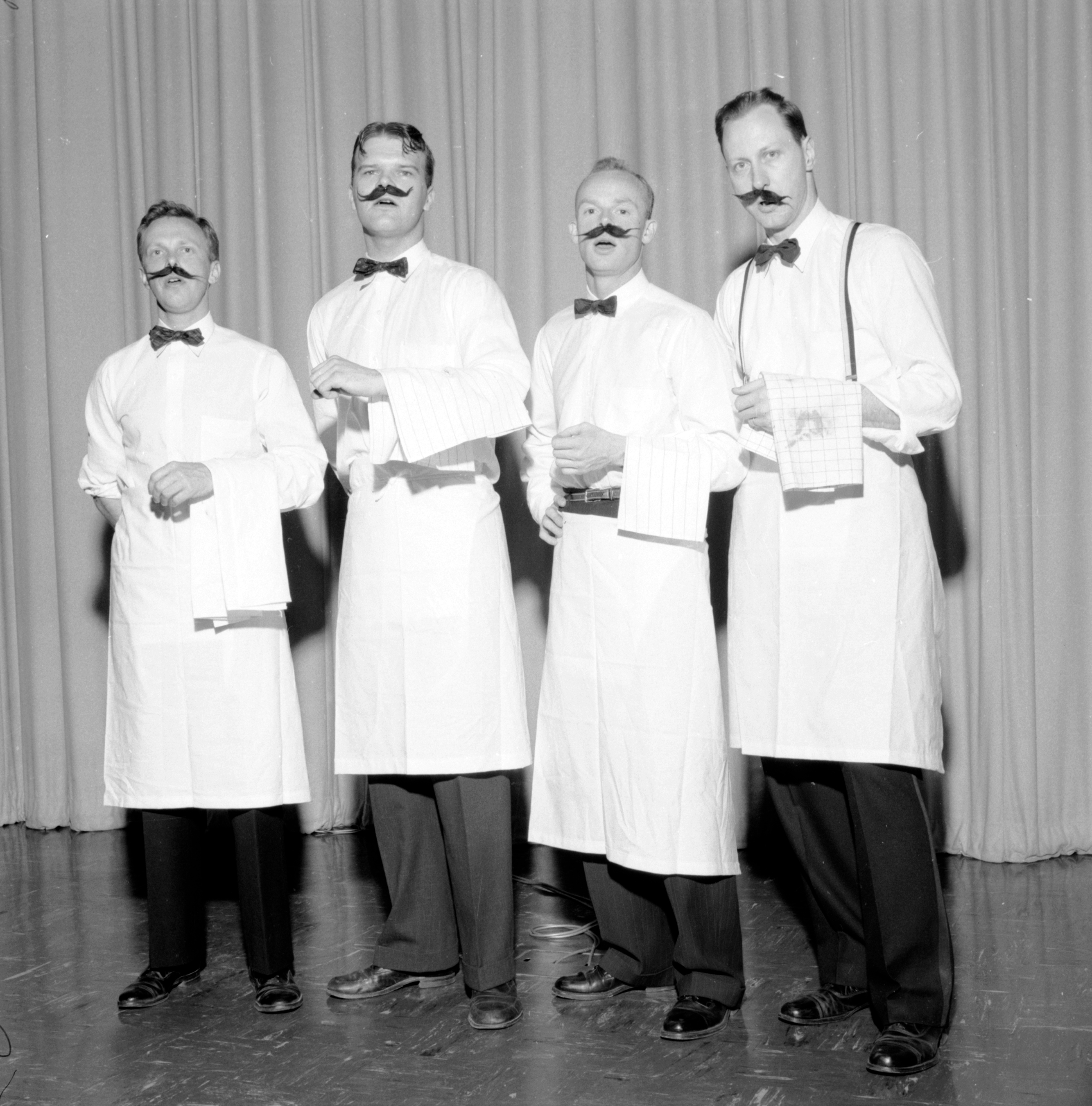 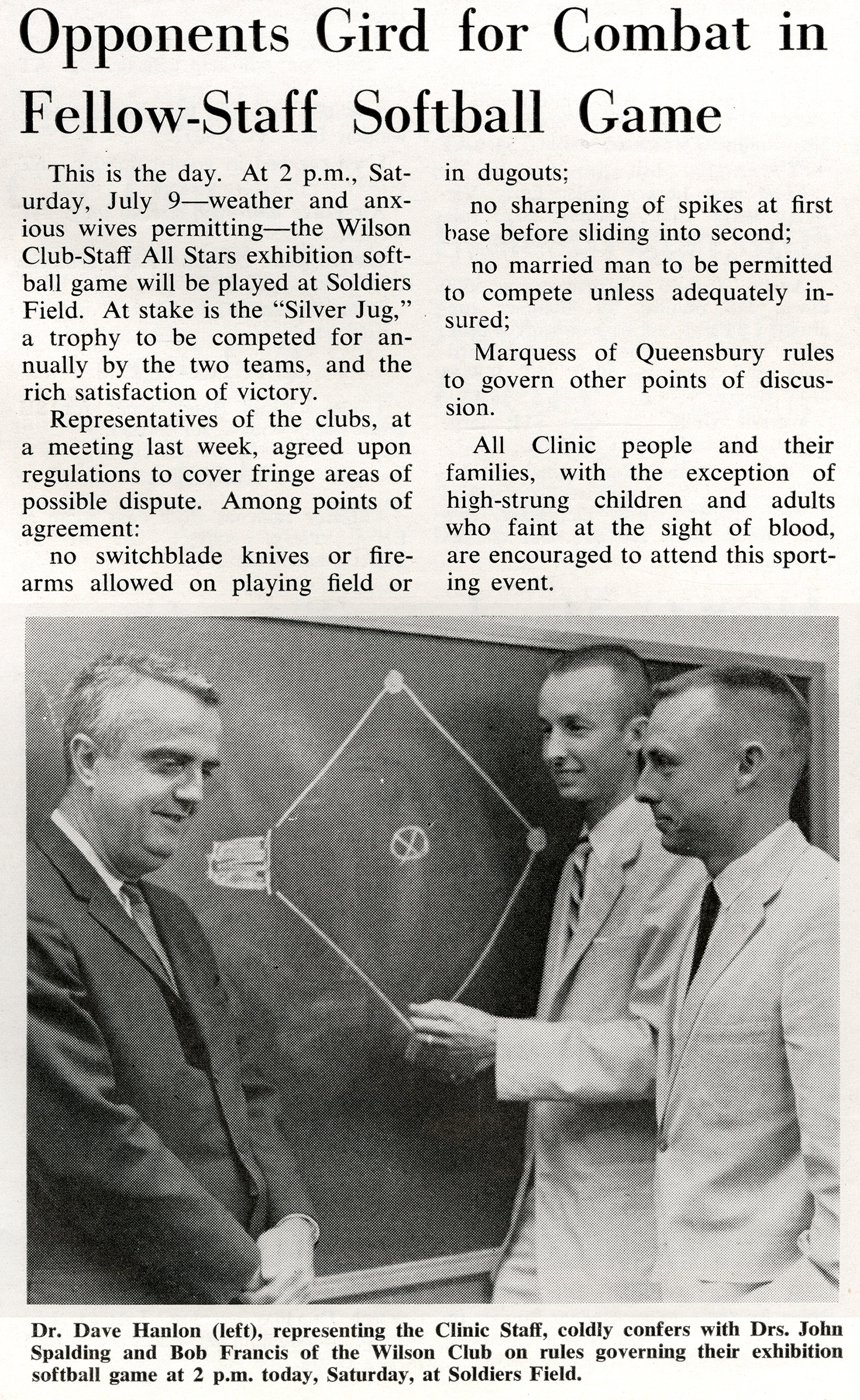 Many autographed portraits of Mayo Clinic consulting staff were displayed on the walls of the Wilson Club, including these portraits of Doctors William J. Mayo and Charles H. Mayo, below. 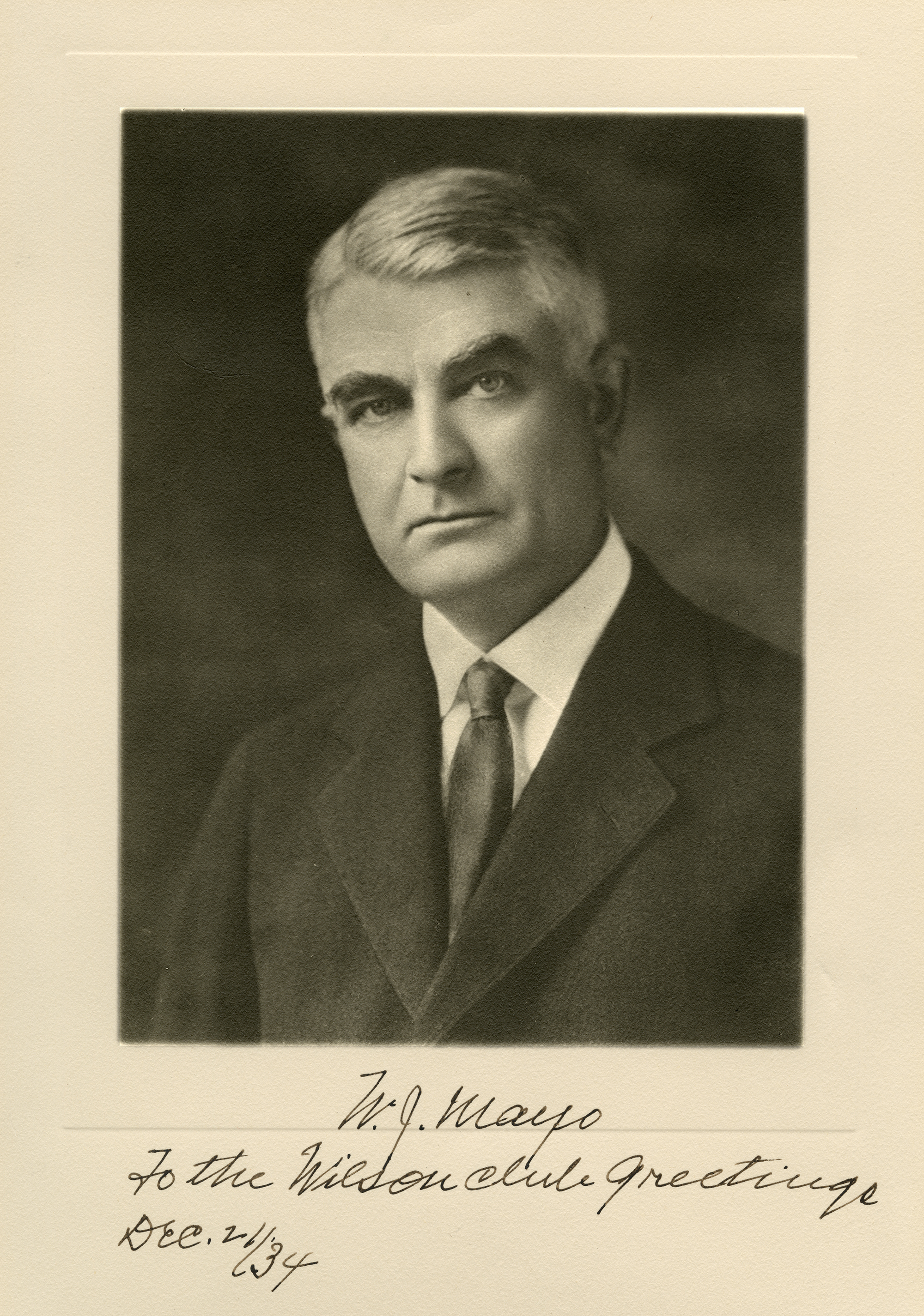 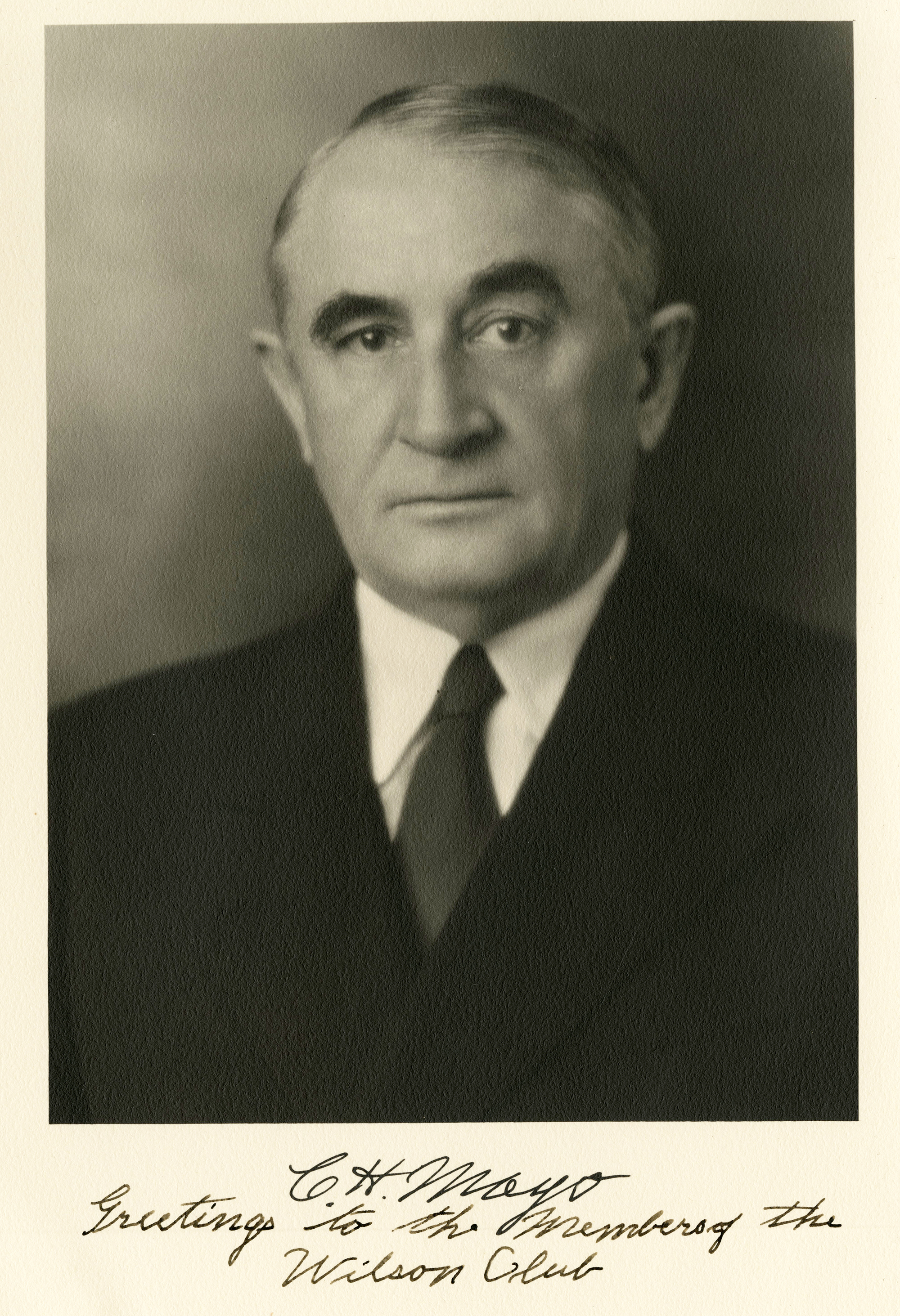 Inscribed photographs presented to the Wilson Club in 1934.

Maintenance costs and low utilization led to the closing of the Wilson Club in September 1970, after almost 36 years of service.

The Physicians' and Surgeons' Club 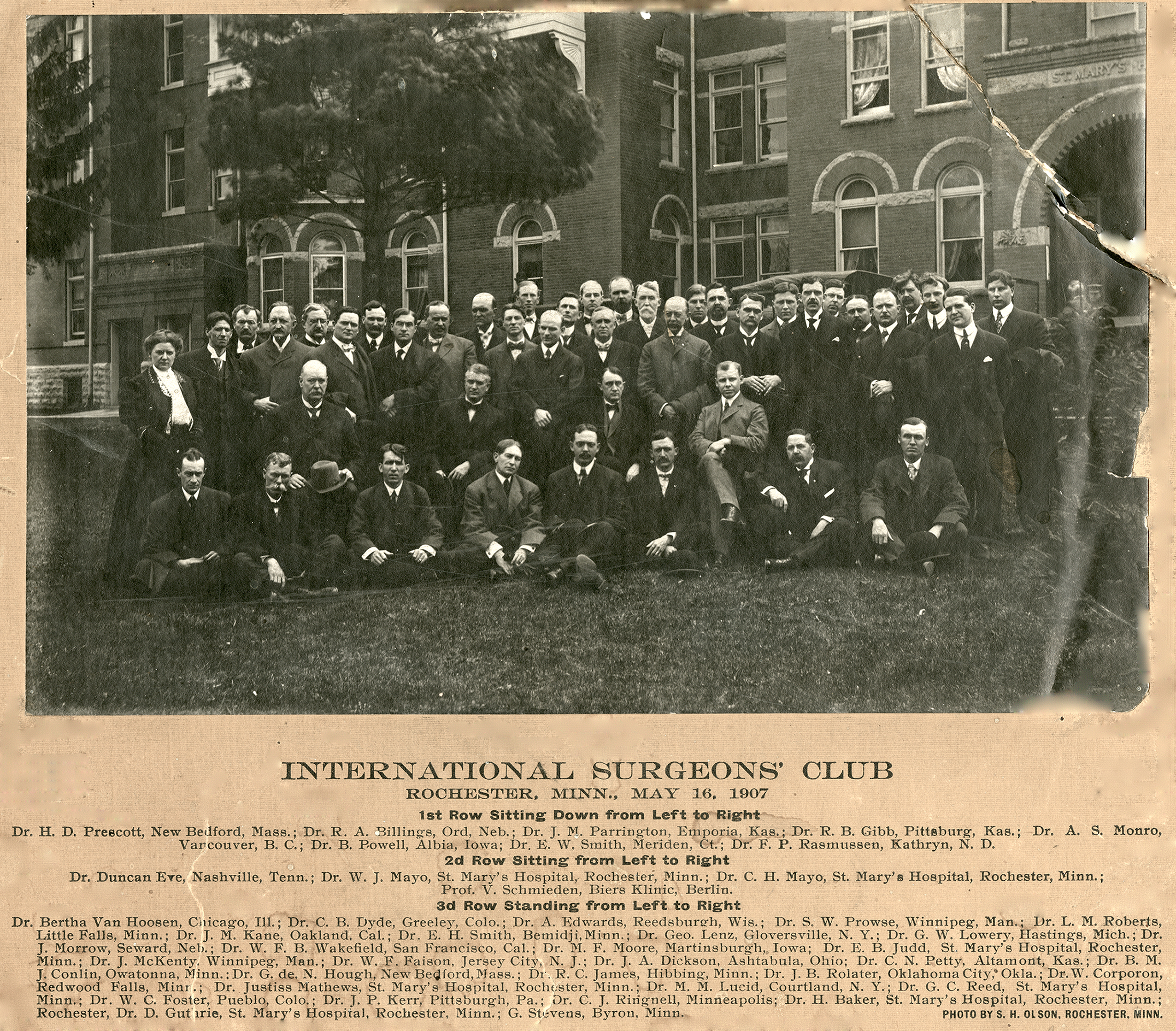 Physicians from 16 states and two countries pose for a photograph in front of Saint Marys Hospital on May 16, 1907.  Doctors William J. and Charles H. Mayo are seated in the middle of the second row from the front, and Mayo Clinic surgeon Dr. E. Starr Judd is standing between them.

The International Surgeons’ Club was inaugurated on June 7, 1906, by a group of six surgeons visiting the Mayo brothers and their operating rooms at Saint Marys Hospital.  The club was formed “for the purpose of promoting the spirit of true fraternalism among the physicians who, from time to time, visit Rochester to witness the surgical work that is being done, arranging for stated meetings when the work observed may be reported and discussed, taking advantage of such lectures and discussions as may be provided, and taking such measures as will aid in insuring proper ethical standing and deportment among the members of the profession who visit Rochester.”  Initially formed as a temporary organization, the club was made permanent on July 14, 1906, and the named changed to the Surgeons’ Club. In 1919 the name of the club was changed to the Physicians’ and Surgeons’ Club and its lectures enlarged to cover both medical and surgical specialties. 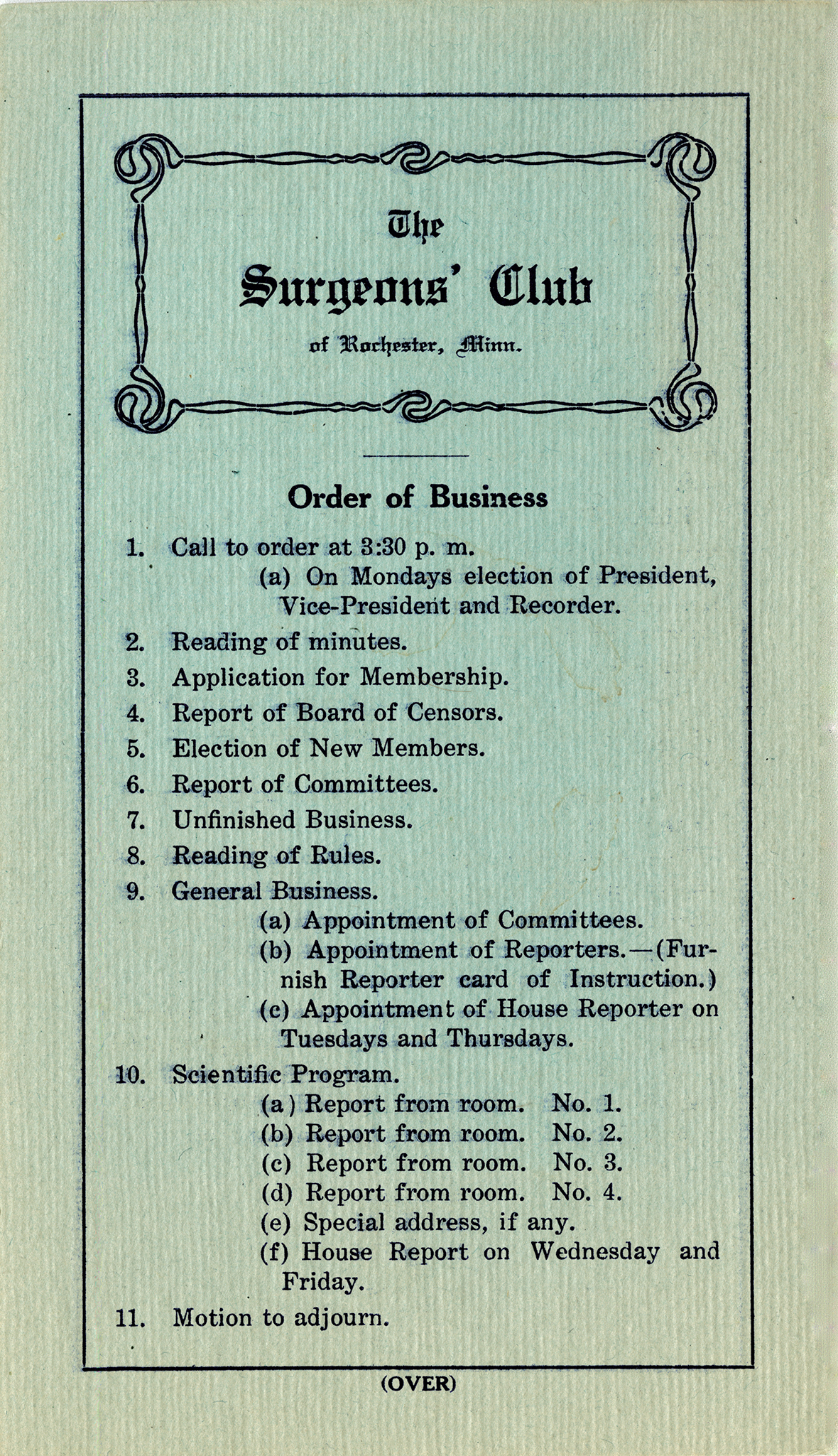 Surgeons' Club Order of Business, circa 1907

Any reputable, licensed physician was eligible to become a member and there were active, life and honorary memberships.  Members paid dues of $1 to $2 on each visit.  Life membership required the payment of $5 in dues and entitled the member to the privileges of the club during his lifetime.  Honorary memberships were bestowed upon eminent physicians who gave lectures at the club and members of the Mayo Clinic staff. 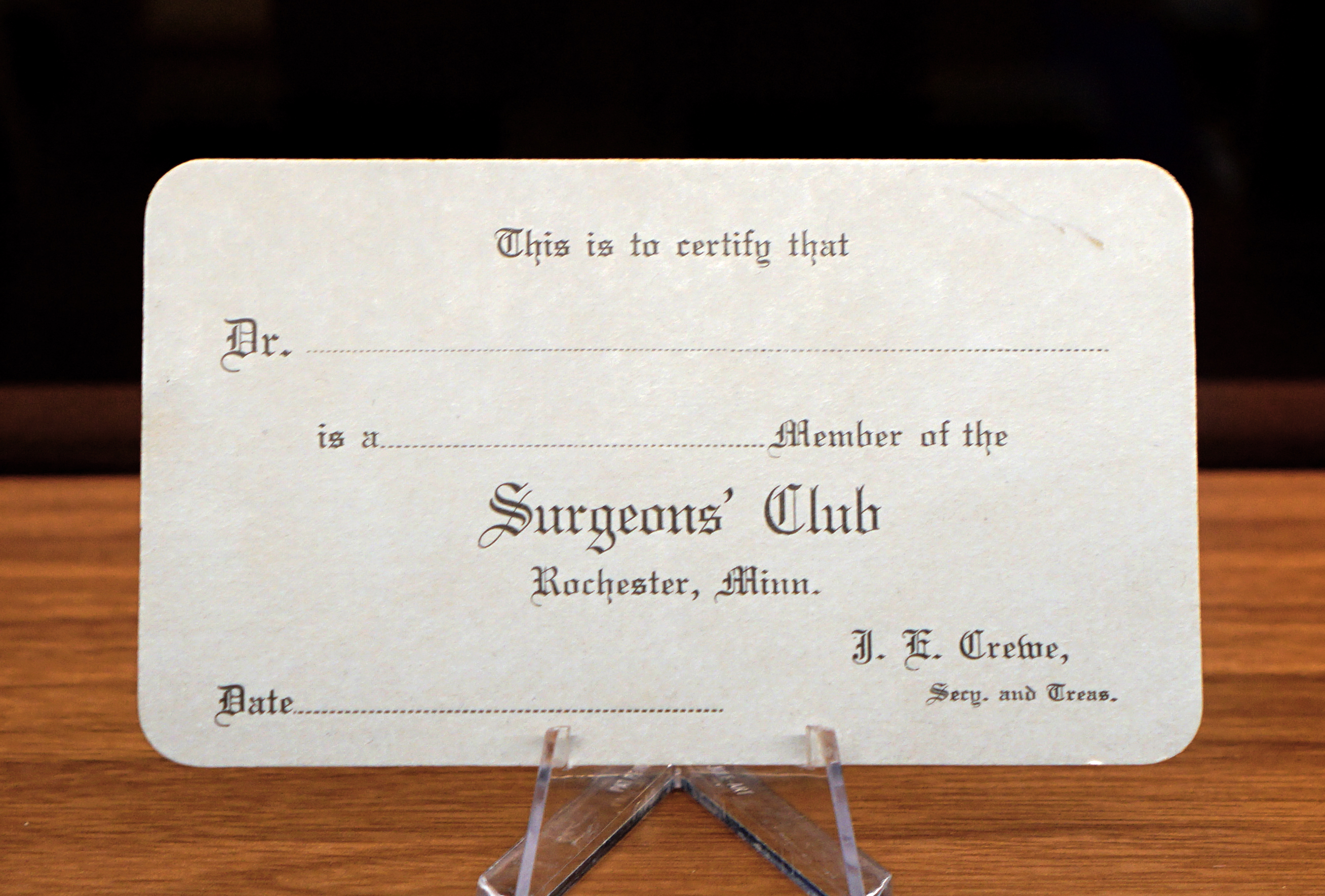 An example of a Surgeons’ Club membership card.  Dues were paid for active and life memberships, and honorary memberships were bestowed upon eminent visiting physicians and Mayo Clinic staff members who gave lectures at the club. circa 1907

The offices of president and recorder were elected each week.  Dr. John E. Crewe, a local physician, served as the permanent secretary-treasurer.  Each week the president appointed reporters who were assigned to each surgical service and who reported to the club the details of the operations performed on each service.

One of six satin ribbon badges worn by Surgeons’ Club reporters while observing operations at Saint Marys Hospital.  Reporters selected the seats with the best view in each operating amphitheater so that they could later describe the procedure at the club’s afternoon or evening meeting. circa 1907 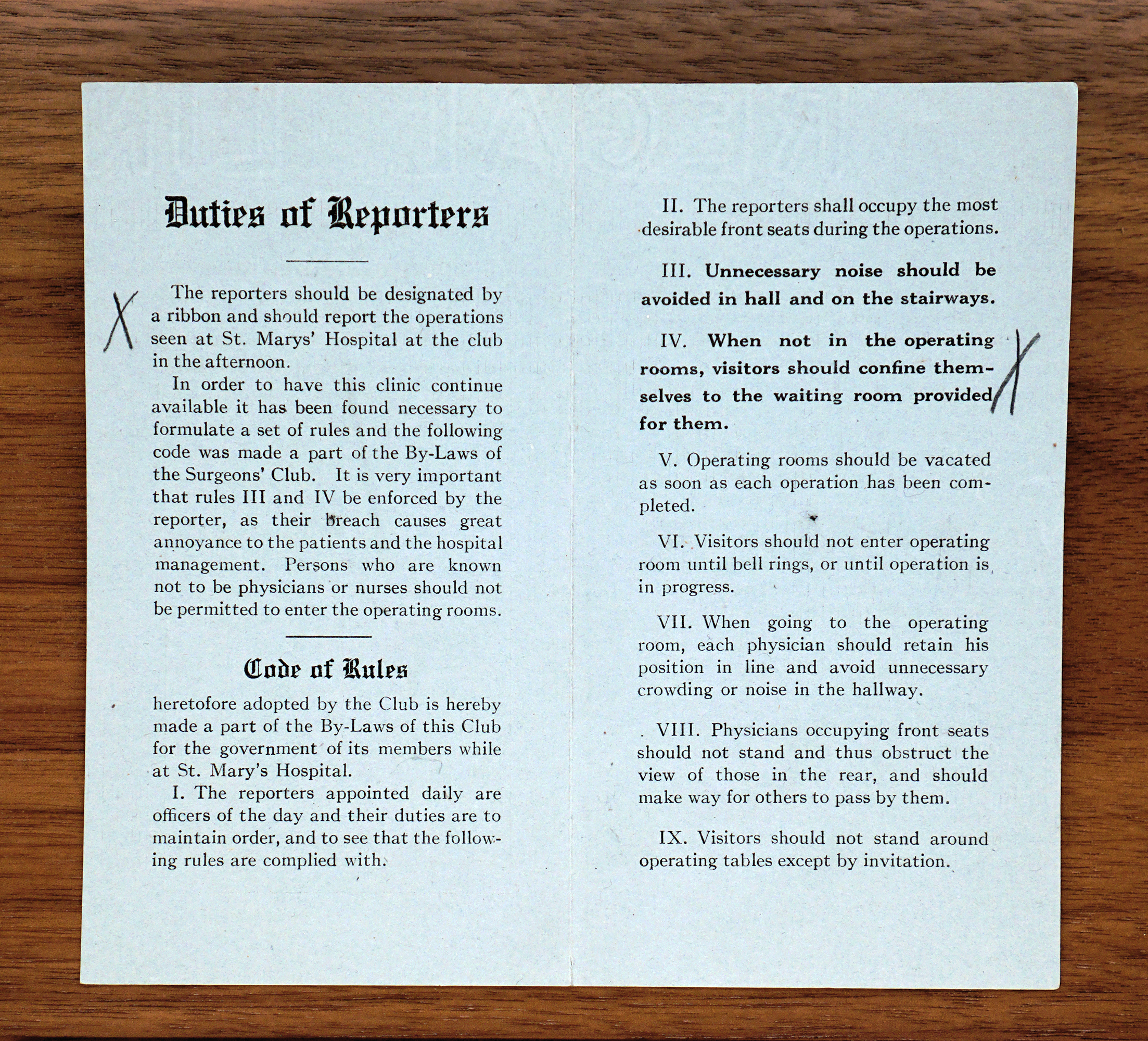 In addition to reporting on operations, the reporter was responsible for leading the visitors into the observation areas and enforcing the “Code of Rules” adopted by the Surgeons’ Club for visiting physicians.  Only physicians and nurses were permitted to enter the operating rooms.  circa 1907

The day’s program consisted of clinics in the forenoon, an afternoon or early evening session during which the work seen in the morning was discussed, and lectures two or three evenings a week by some member of the Mayo staff or a visiting physician. 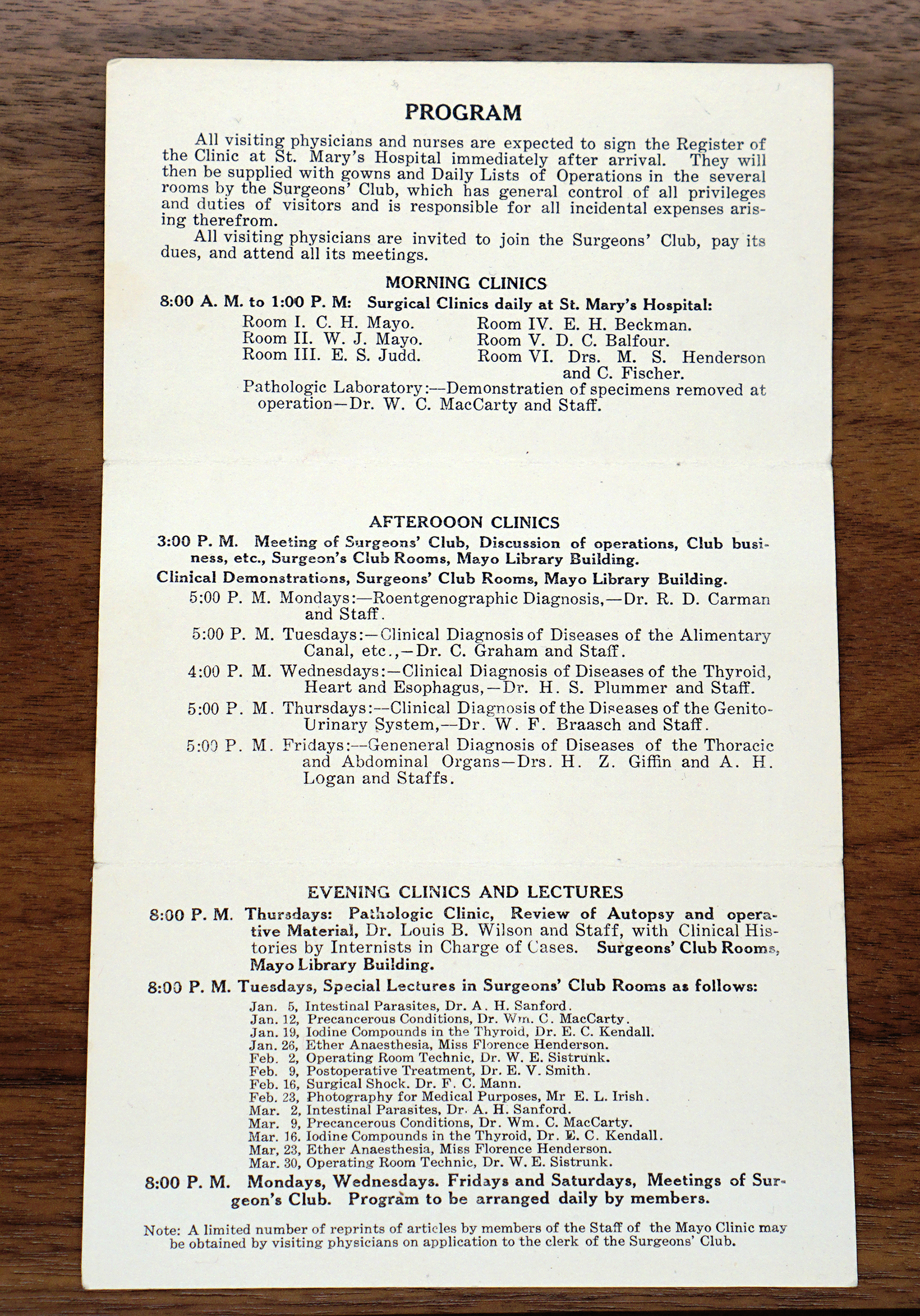 Schedule of clinics and lectures available to Surgeons’ Club members for the first quarter of 1915.  Mayo Clinic staff members were invited to present evening lectures. 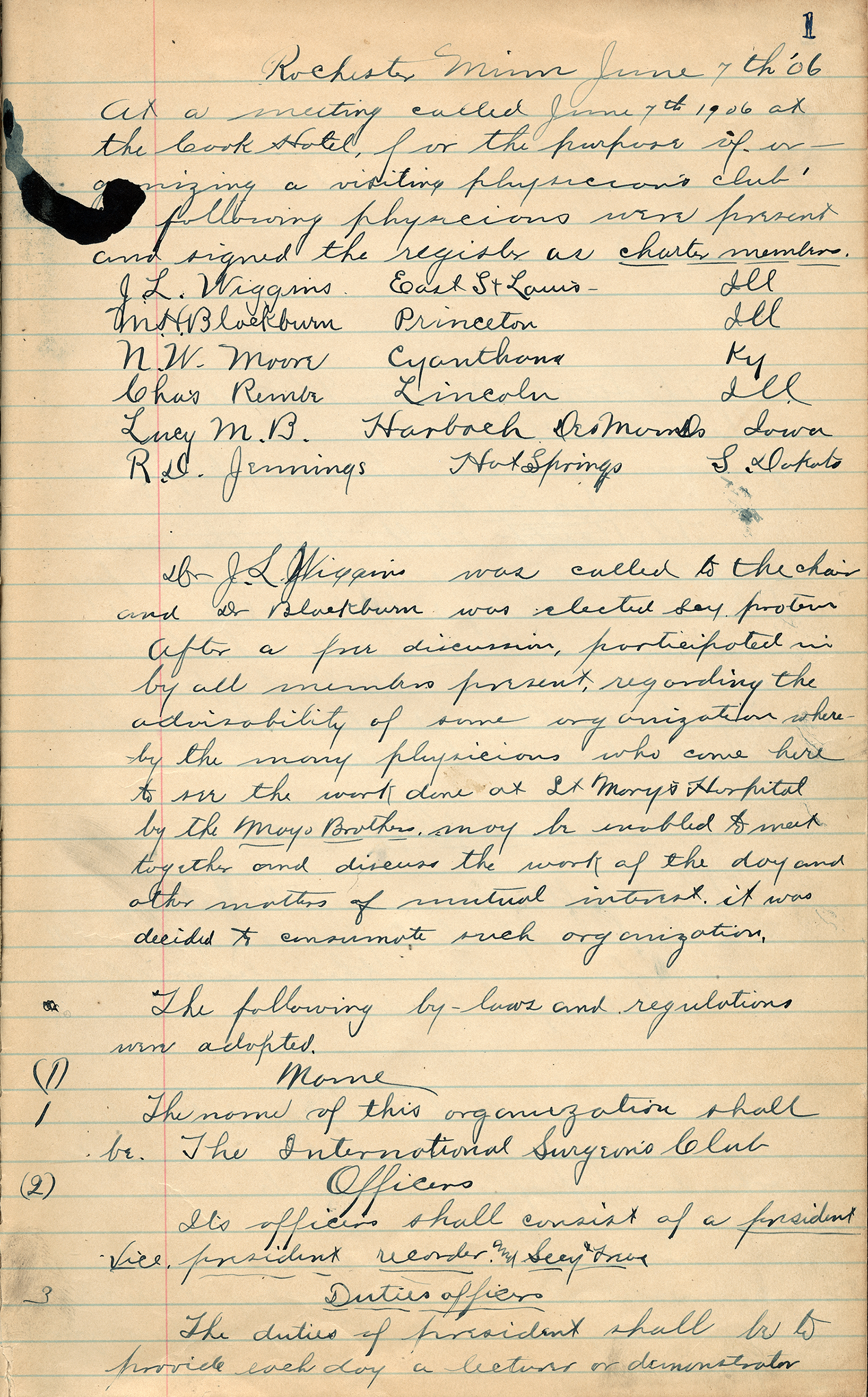 Minutes from the first meeting of the Surgeons’ Club, held on June 7, 1906, at the Cook Hotel. 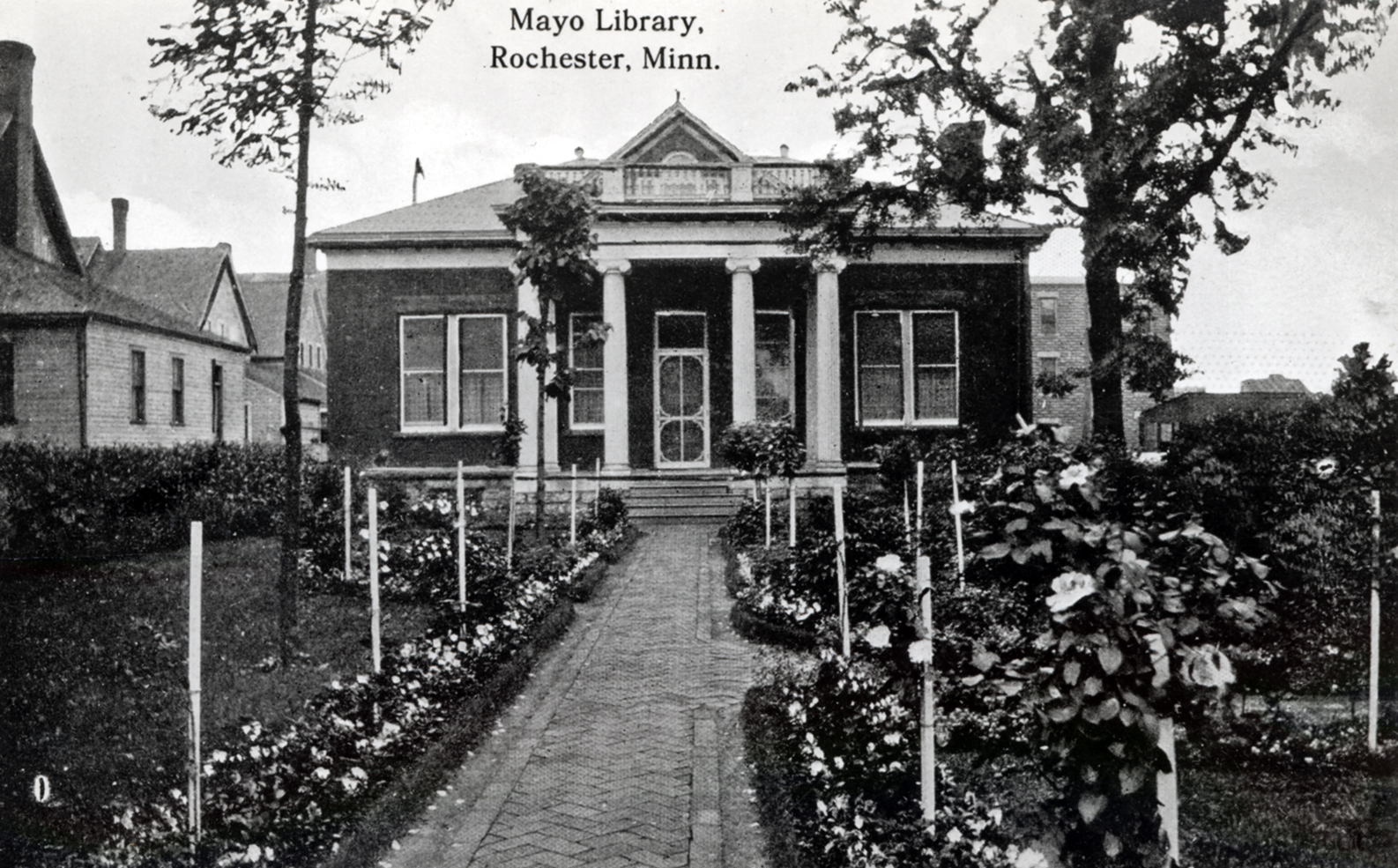 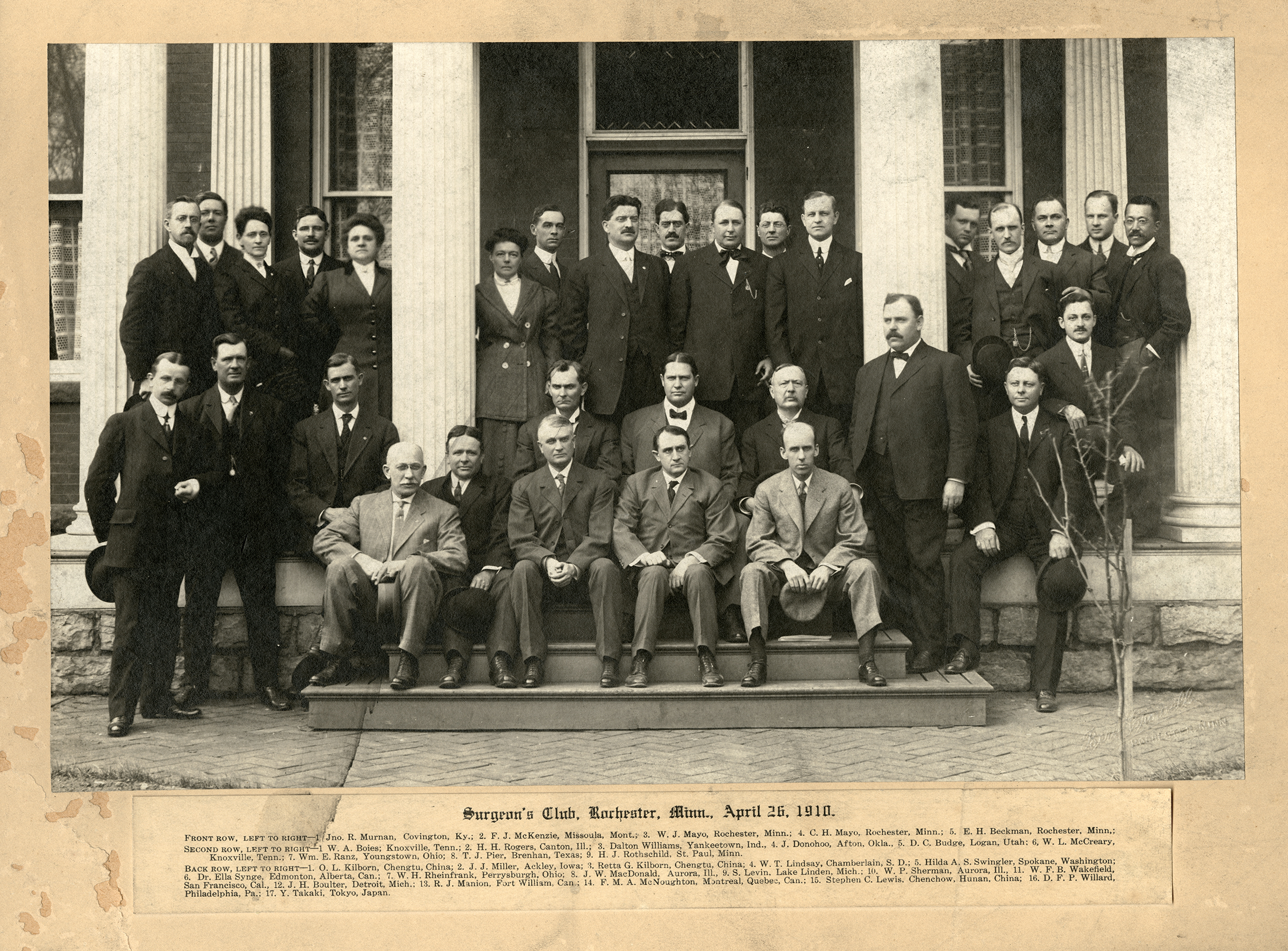 Members of the Surgeons’ Club pose in front of the Mayo Clinic Library on April 26, 1910.  Doctors William J. Mayo, Charles H. Mayo and Emil H. Beckman (a Mayo Clinic surgeon), are seated on the steps in the middle of the front row. 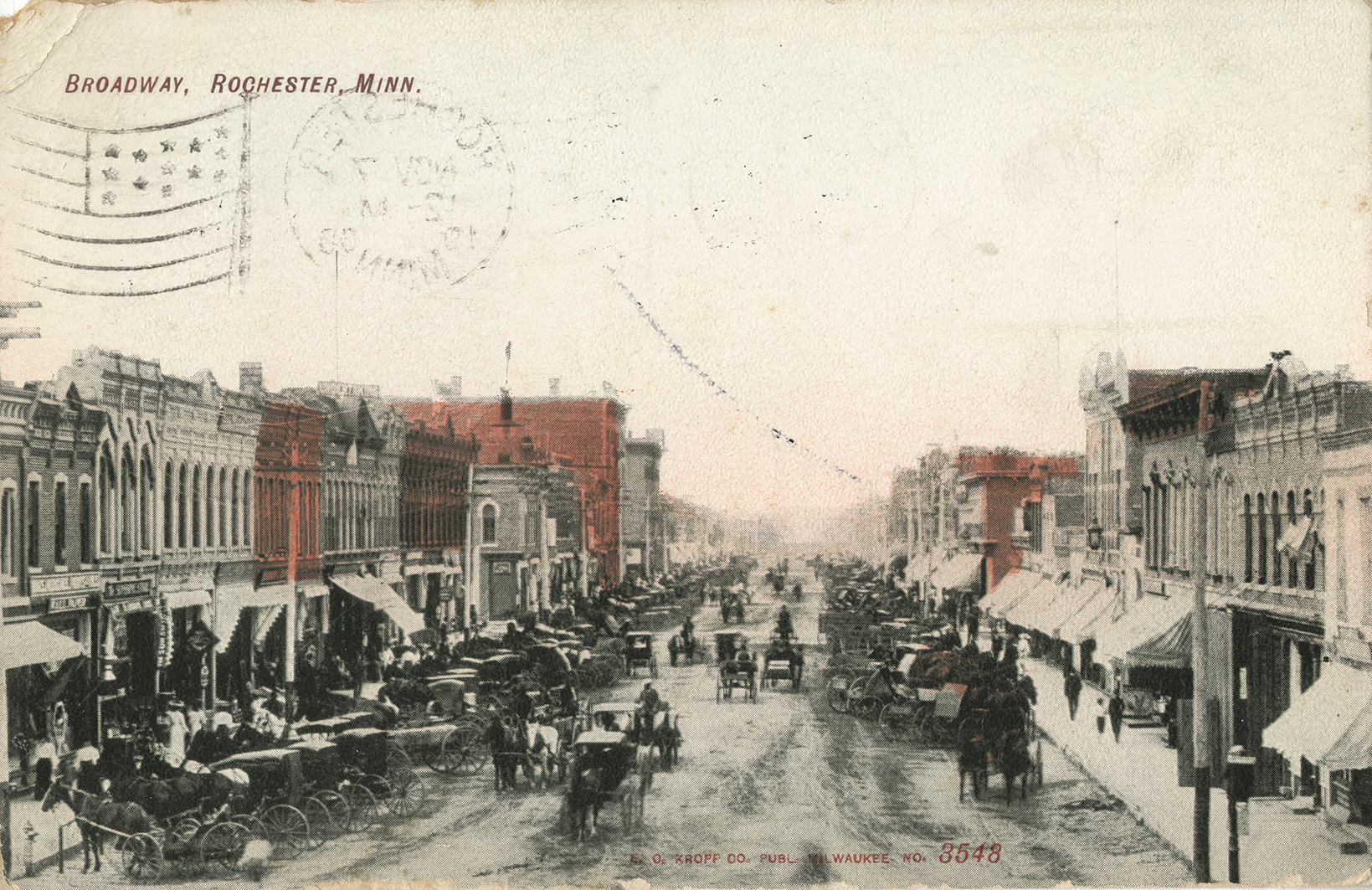 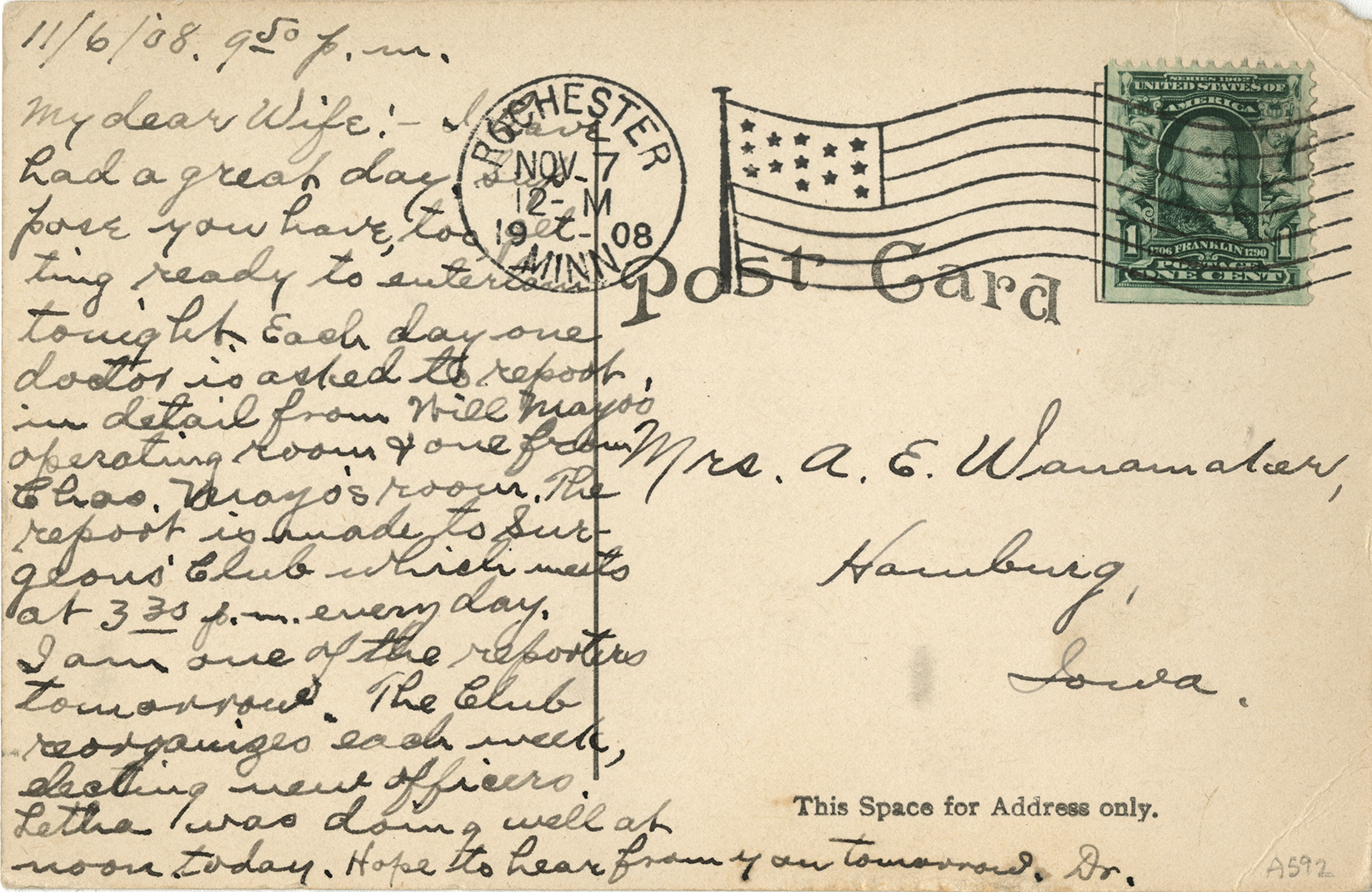 Postcard from Dr. A. E. Wanamaker to Mrs. Wanamaker in Hamburg, Iowa, November 6, 1908
My dear Wife: I have had a great day, suppose you have too, getting ready to entertain tonight.  Each day one doctor is asked to report in detail from Will Mayo’s operating room and one from Chas. [sic] Mayo’s room.  The report is made to Surgeons’ Club which meets at 3:30 p.m. every day.  I am one of the reporters tomorrow. The Club reorganizes each week, electing new officers. … Hope to hear from you tomorrow.  -Dr. 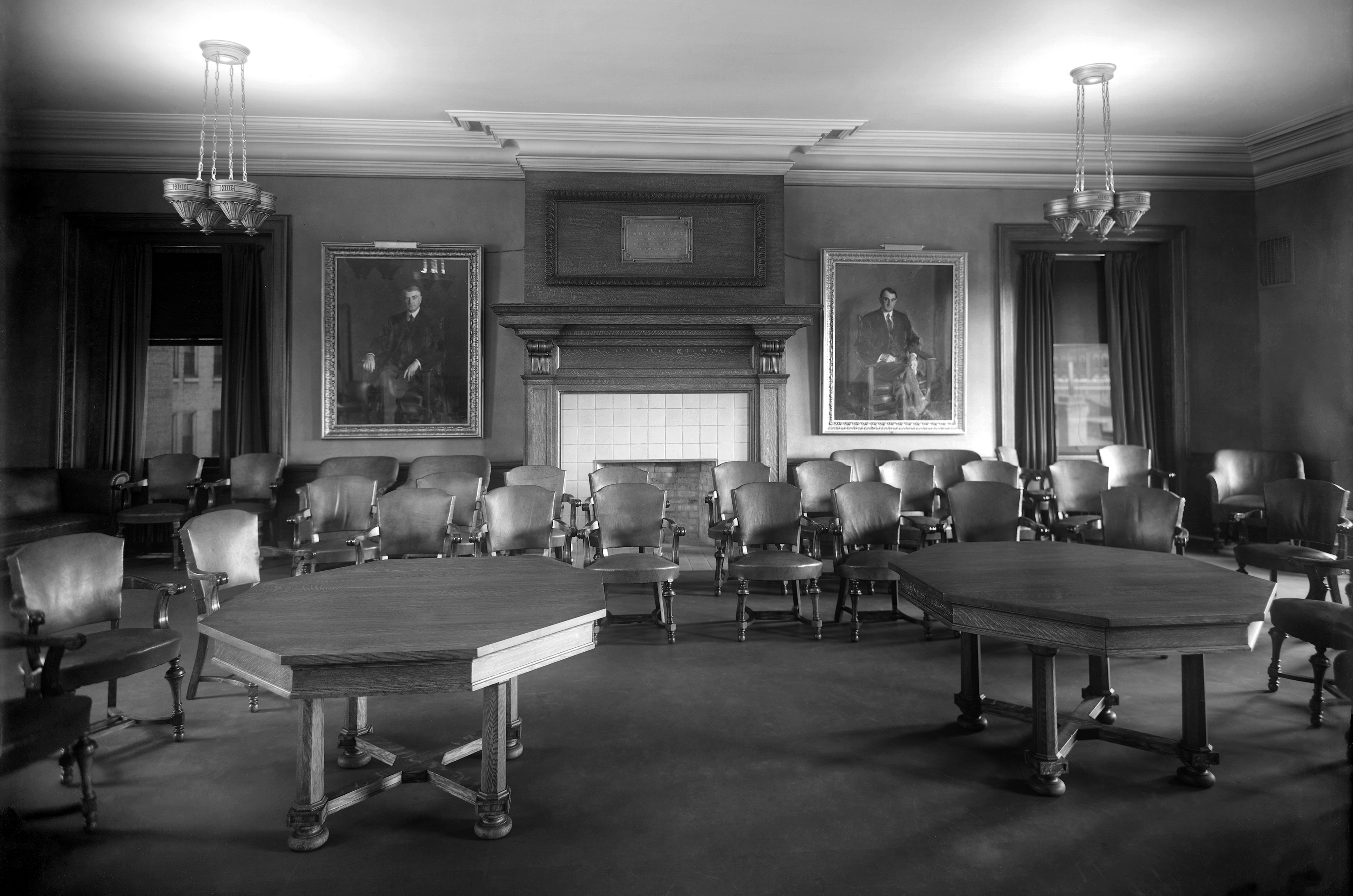 Propelled by an increasing demand for space, the Clinic converted the Library building into an area for patient examinations and the club moved its activities to the assembly room in the 1914 Mayo Clinic building. Photograph dated 1914

The club’s activities gradually ceased after lectures and seminars presented through Mayo’s graduate school were opened to visitors.