W. Bruce Fye Center For the History of Medicine: History of the Mayo Clinic Glass Shop, 1920-2020 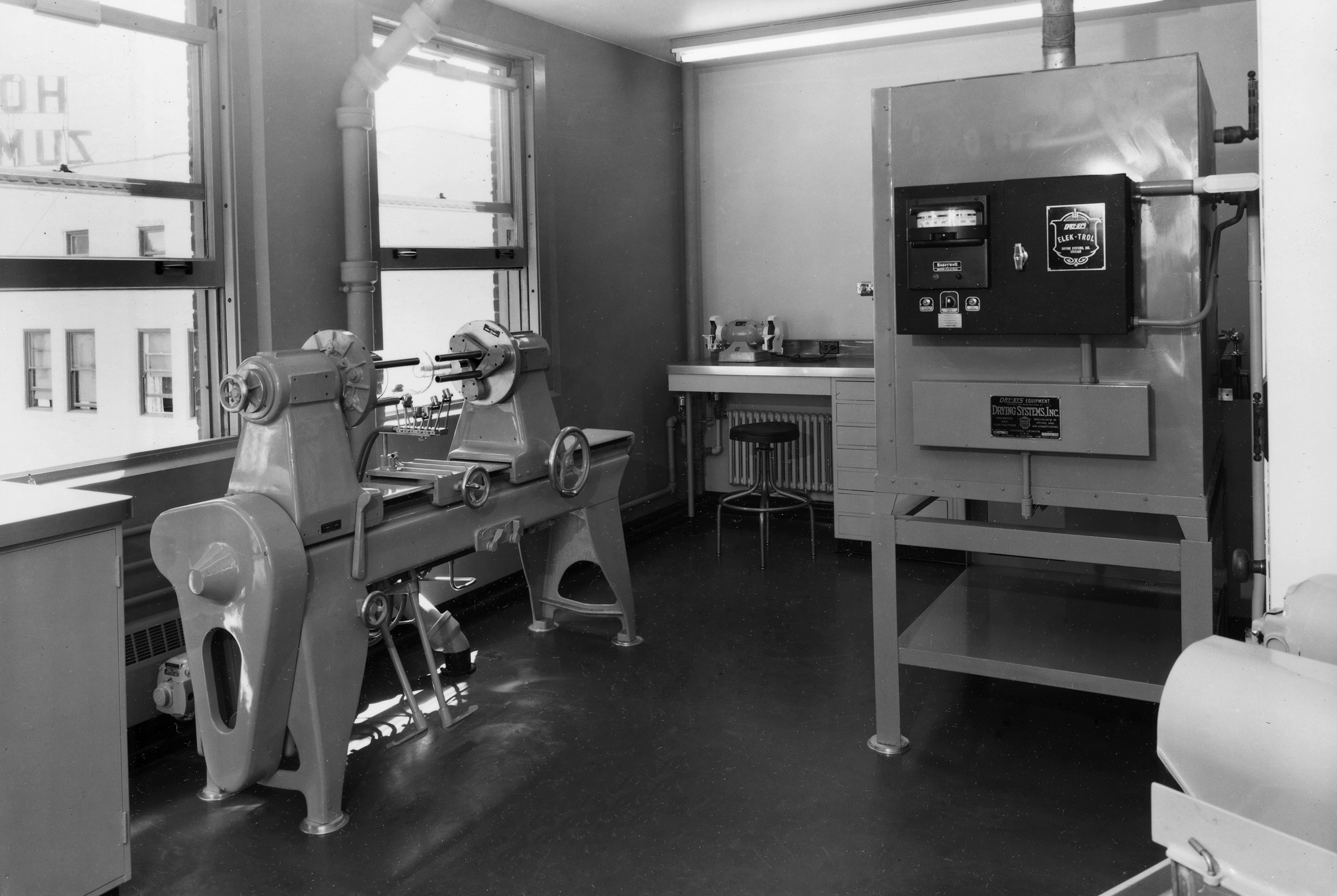 The year 2020 marks the 100th anniversary of the Mayo Clinic Glass Shop. Scientific glassblowing provides a unique opportunity for the design, fabrication and repair of specialized research apparatus. The Clinic’s glassblowers work in collaboration with clinical and research groups and the staff of the Division of Engineering. They help design and create apparatus unique to Mayo experiments or research and modify commercially available glass to suit specific Mayo needs. An initial emphasis in the early years on maintenance and repair of standard laboratory glassware has decreased as collaboration on more complicated projects has grown.

For a more detailed description of the Glass Shop, see the exhibit pamphlet, “History of the Mayo Clinic Glass Shop, 1920-2020.” 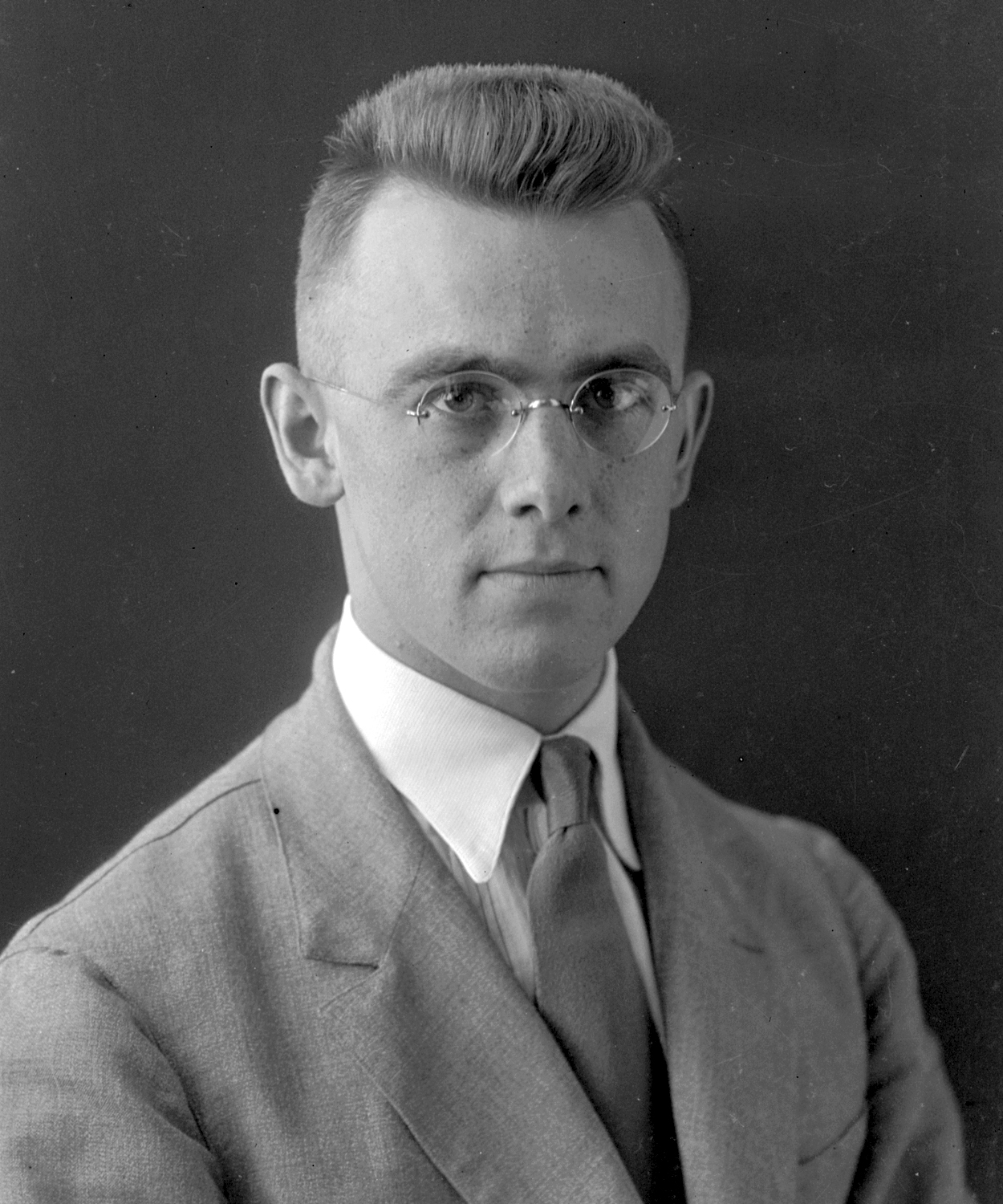 Dr. Heck was born in St. Paul, Minnesota, in 1897. He earned a B.S. degree from the University of Minnesota in 1919 and entered the Mayo Foundation as a Fellow in Physiological Chemistry in August 1920. He became first assistant in Clinical Chemistry for Dr. Arthur H. Sanford’s Section on Clinical Pathology. While in this service, he taught basic glassblowing techniques to Harry Nunamaker, who would become Mayo’s first resident glassblower. Heck left Mayo in 1921 to study at the University of Minnesota once more, receiving his B.M. and M.S. degrees in pathology in 1925 and his M.D. degree in 1926. That same year, he returned to Mayo Clinic as a fellow and joined the staff as a consultant in medicine in 1929. Heck became well-known for expertise in diseases of the blood and was recognized as an authority on various types of anemia. He retired from Mayo Clinic in 1962, continuing to practice part-time as a senior staff physician at the Rochester State Hospital. 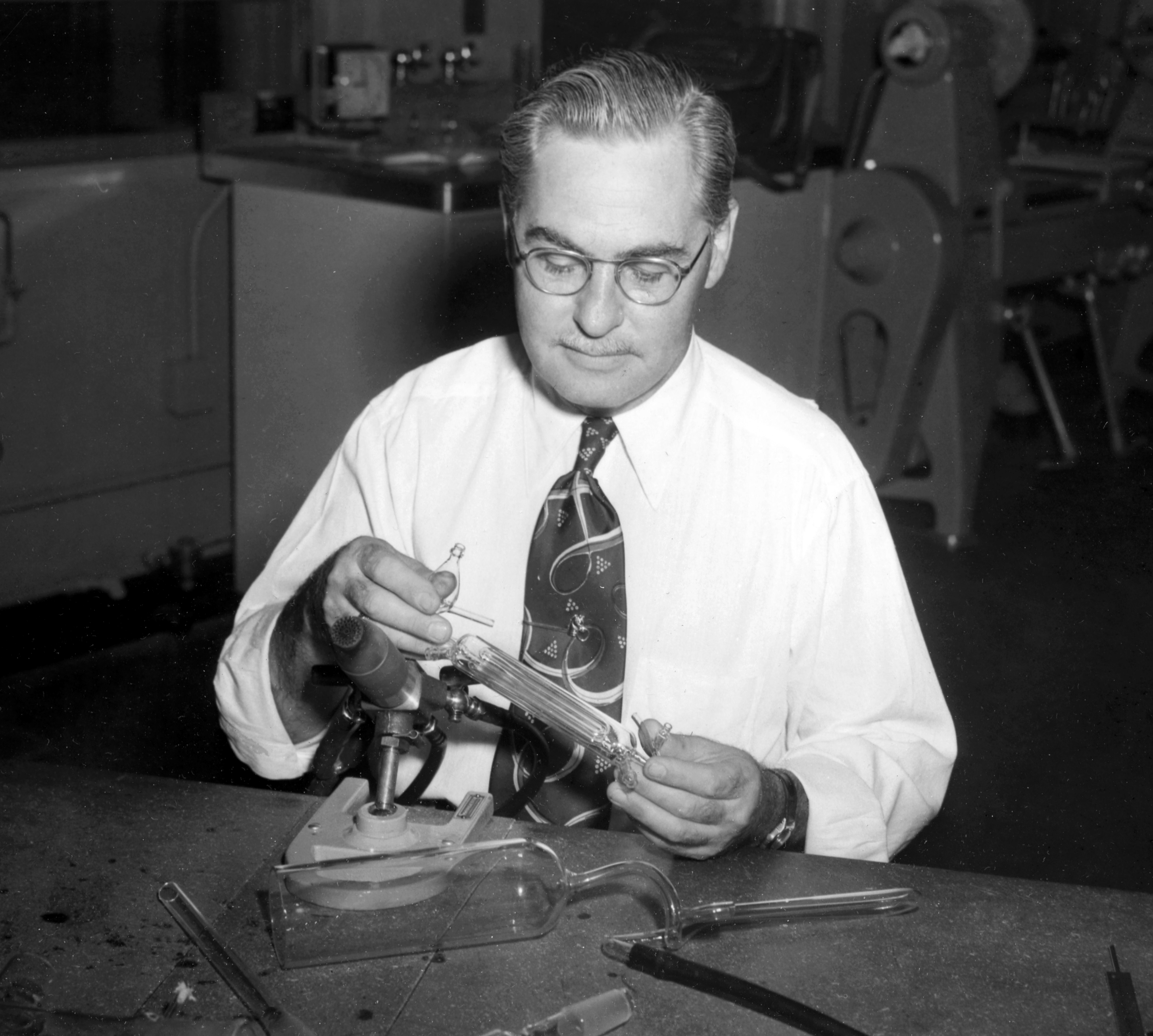 Born in Wabasha County, Minnesota, in 1902, Harry Nunamaker was working as a professional trumpet player when he first came to Rochester in 1921. After his sister, a secretary at Mayo Clinic, encouraged him to find a job there, Nunamaker became an assistant in Dr. Edward C. Kendall’s Biochemistry Laboratory. Sometime in 1921, he met Frank J. Heck, an assistant in the Clinical Pathology Section, who taught him basic glassblowing techniques. Dr. Kendall asked that Nunamaker be sent to the University of Minnesota to advance and refine his glassblowing skills. On his return he became the Clinic’s resident glassblower and began producing specialized equipment for Mayo’s doctors, researchers and scientists. Dr. Kendall’s 1928 Section on Biochemistry Annual Report noted that Nunamaker had “saved the Clinic a large amount of money in the preparation of special apparatus.” In addition to creating custom glassware, he was also responsible for maintaining and repairing the standard glass equipment used in Mayo Clinic laboratories. Toward the end of his career, he was producing or repairing approximately 28,000 pieces per year. After 45 years as glassblower, he retired in 1966. As Nunamaker said in a 1963 Post-Bulletin interview, “[Glassblowing is] tedious, monotonous and requires painstaking patience. Only a person who really loves it stays with it after the novelty wears off.” 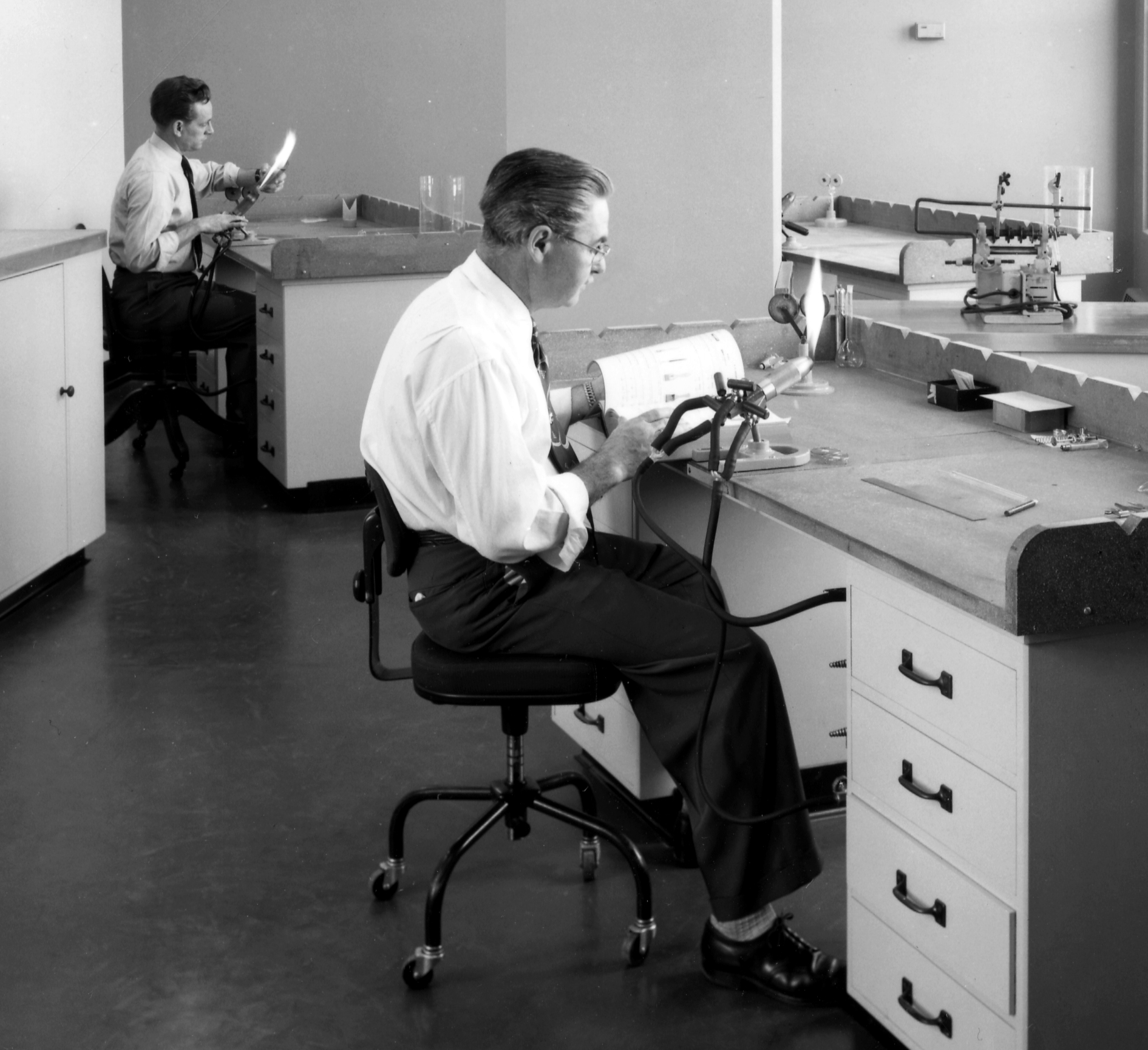 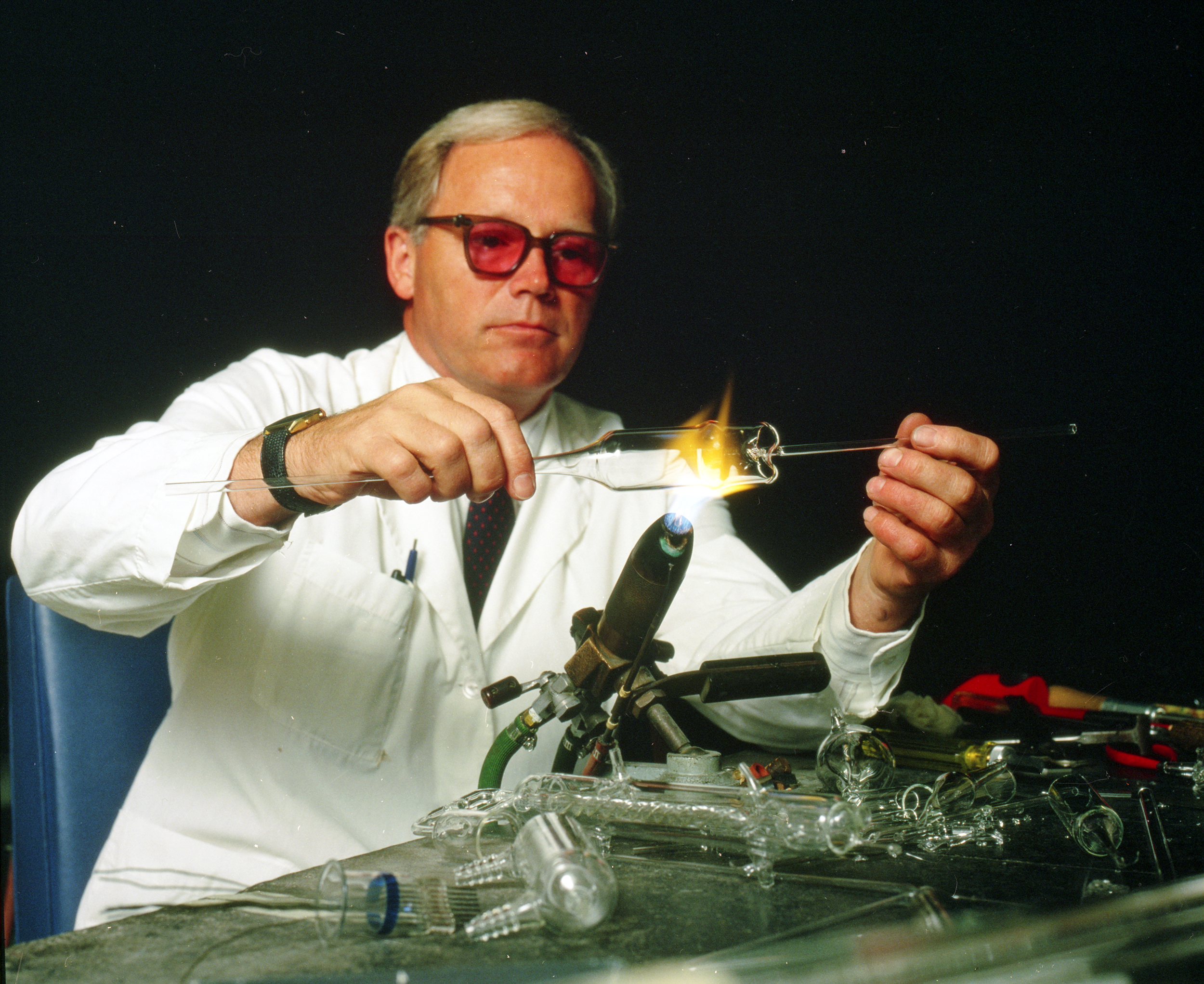 Gordon Smith came to Rochester from Minneapolis, Minnesota. Smith, who completed an apprenticeship under a Dutch master glassblower at the University of Minnesota, became Mayo Clinic’s glassblower after Harry Nunamaker’s retirement in 1966. Like his predecessor, Smith collaborated with Mayo researchers to make innovative, customized glass equipment that was too expensive to purchase or did not even exist. “Machines will never replace the custom work that human hands can do,” Smith said in a 1985 Mayovox article. As a member of the American Scientific Glassblowers Society (ASGS), Smith advocated for the training and support of those who specialized in producing glassware for scientific and medical purposes. However, Smith also appreciated the artistic aspect of glassblowing and created glass figures such as flowers, animals, dancers, bells and wedding cake toppers at home. In 1992 the ASGS presented Smith with the Helmut E. Drechsel Achievement Award in recognition of his efforts to promote and preserve scientific glassblowing. 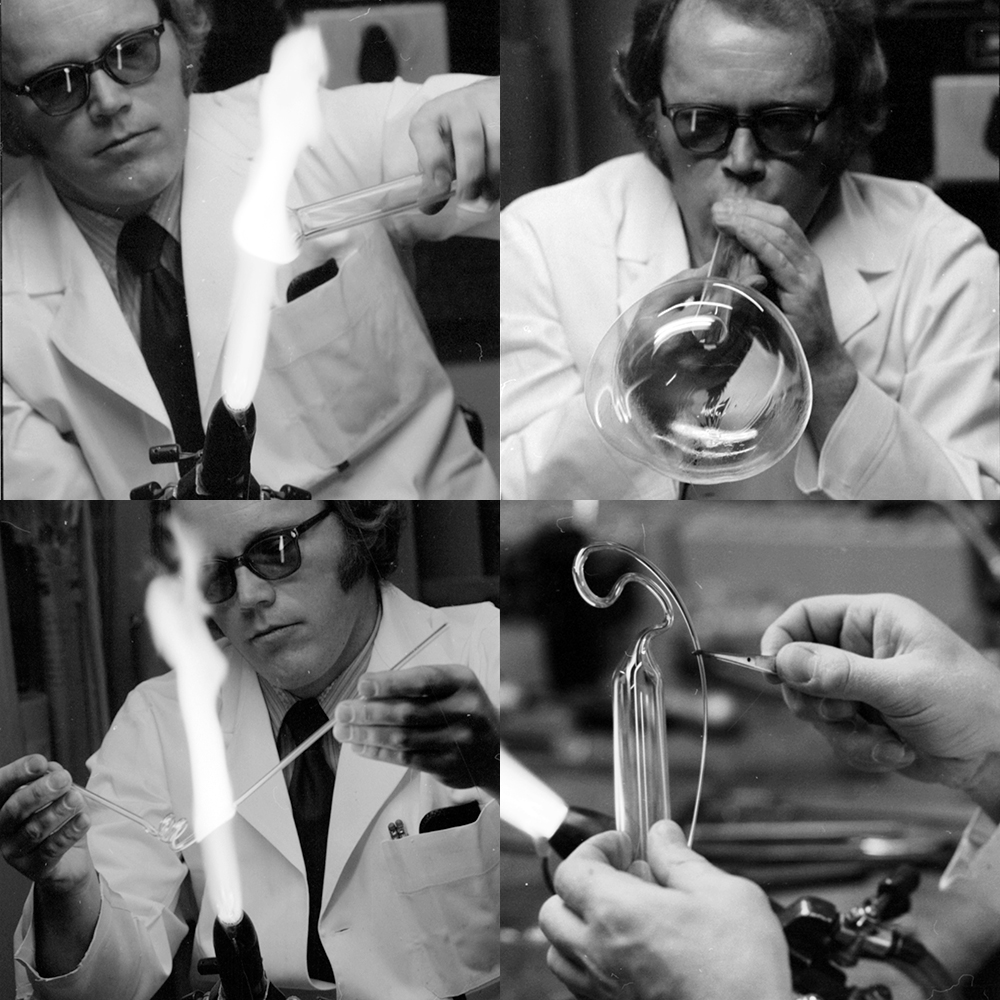 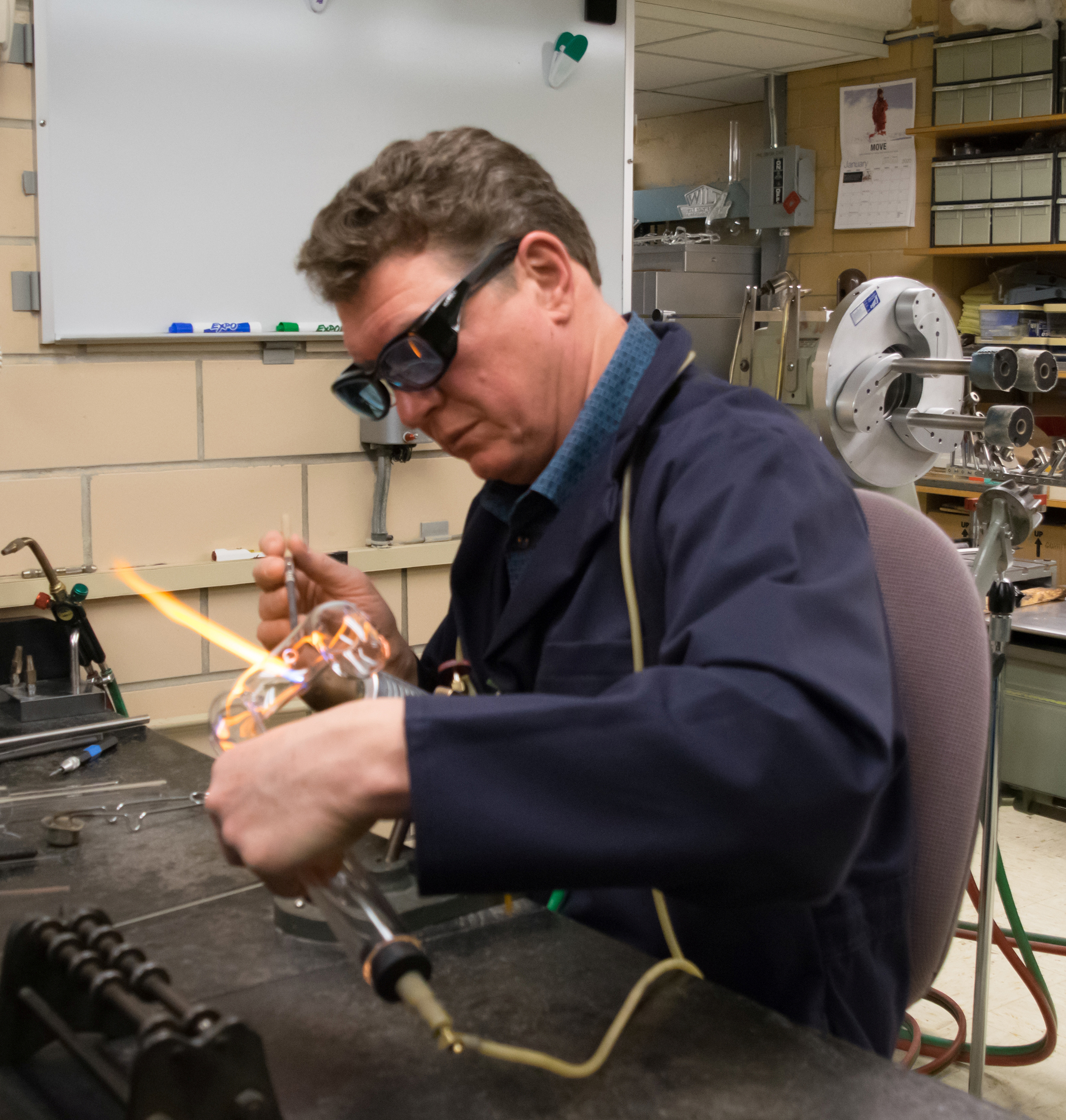 Steven Anderson began his education as a scientific glassblower at Salem Community College in New Jersey in 1986. He worked at Greatglas Inc. (Wilmington, Delaware), Honeywell Inc. (Bloomington, Minnesota), Aldrich Chemical Co. (Milwaukee, Wisconsin), and the University of Nebraska (Lincoln, Nebraska) before joining Mayo Clinic’s Division of Engineering in 1999, where he is currently a Senior Scientific Glassblower. “I turn ideas for experiments into glassware,” says Anderson. “Research lab technicians explain their concepts, and we collaborate to make sure the limitations of commercially available glassware do not limit their imaginations.” A longtime member of both the American Scientific Glassblowers Society and its Midwest Section, Anderson has served in a number of offices and was awarded the Memorial Award in 1992 in recognition of his participation in the Society’s activities. He has presented technical posters and one paper and has won the Wale Award for outstanding technical poster several times. Like Gordon Smith, Anderson enjoys both the technical and artistic elements of glassblowing; his work has been shown at Lanesboro Arts in Lanesboro, Minnesota, and was featured in the 2018 exhibition “Apparatus: The Art of Scientific Glass” at UrbanGlass in Brooklyn, New York. 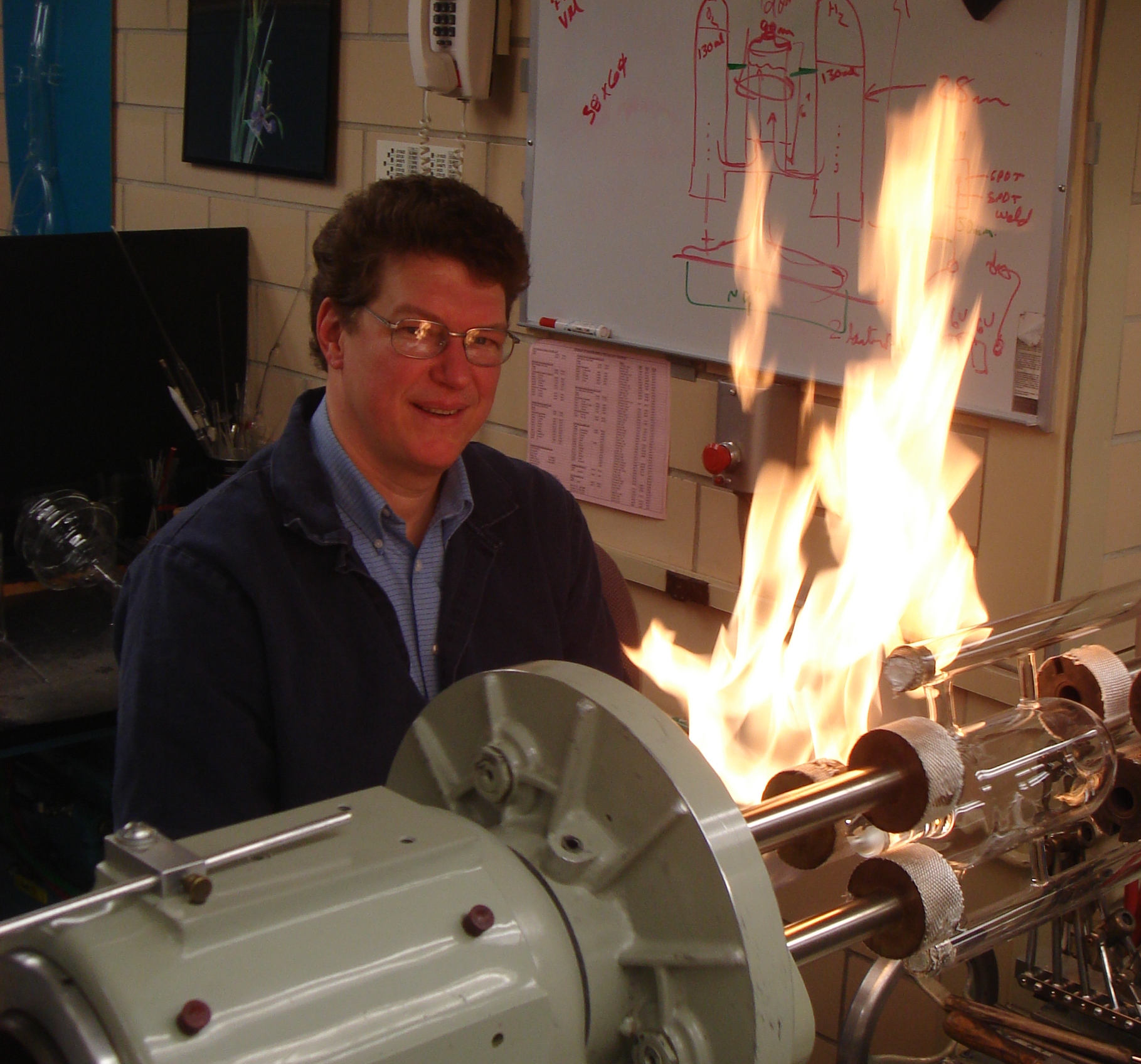 Tools of the Trade: 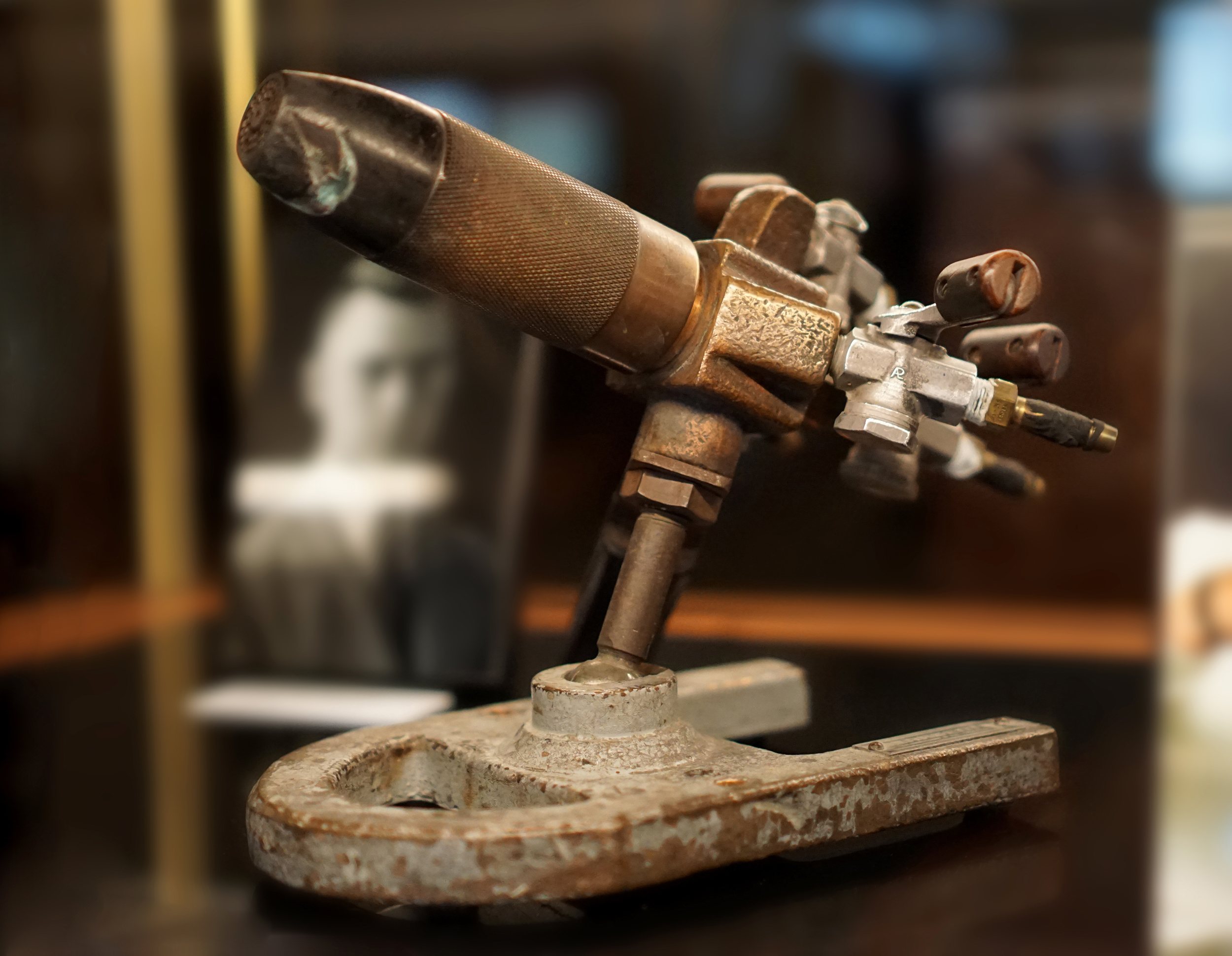 Consistent, intense heat is needed to produce any work in glass. This bench torch, known as a “cannonstyle” burner because its large outer case resembles a cannon in profile, was used by both Harry Nunamaker and Gordon Smith. It may be used with a mixture of oxygen and either natural gas, propane, or hydrogen (different torch tips are suggested depending on the gas used). Steven Anderson currently uses a Carlisle CC burner which will produce 95000 BTUs at 5 psi natural gas pressure and is very similar to this torch. These types of burners produce two distinctive flames, the centerfire (pre-mixed) and the outer fire (surface-mixed). The center fire can be adjusted to a very fine pinpoint, and the outer fire can produce a very large bushy flame that is soft yet very hot. 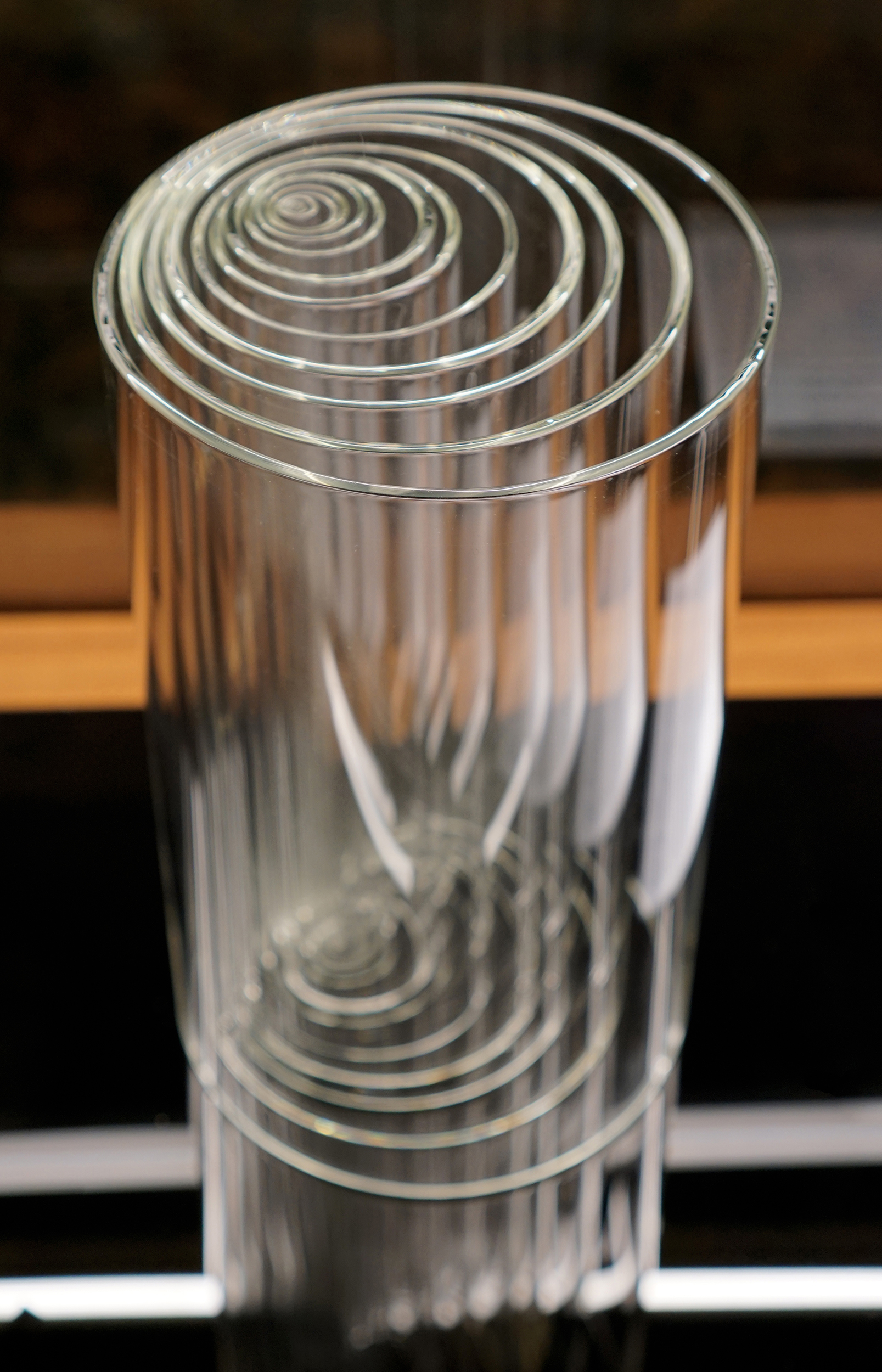 Borosilicate glass-working stock consists of clear rods and tubing available in a wide range of sizes. It is also called “hard glass” and has a Coefficient of Expansion (COE, or the measurement of the rate that glass will expand and contract when it is heated and cooled) of 32 or 33. It is familiar to most people under the brand name Pyrex. The lower COE means the finished pieces will have a higher resistance to thermal shock and a greater resistance to most acids. “Soft-glass” is another name for soda-lime glass, or a higher expansion type glass (88-104 COE), from which common bottles are generally made.

Overview of Isolated Tissue Baths
The glass tissue bath is a traditional experiment set-up commonly used to investigate the physiology and pharmacology of in vitro tissue preparations. Perfused tissue can be maintained for several hours in a temperature controlled organ bath.

Experiments involve the addition of drugs to the organ bath or direct/field stimulation of the tissue. The tissue reacts by contracting/ relaxing and an isometric or isotonic transducer is used to measure force or displacement, respectively. Dose-response curves (tissue response against drug dosage or stimulus potency) are generated from the experimental results. 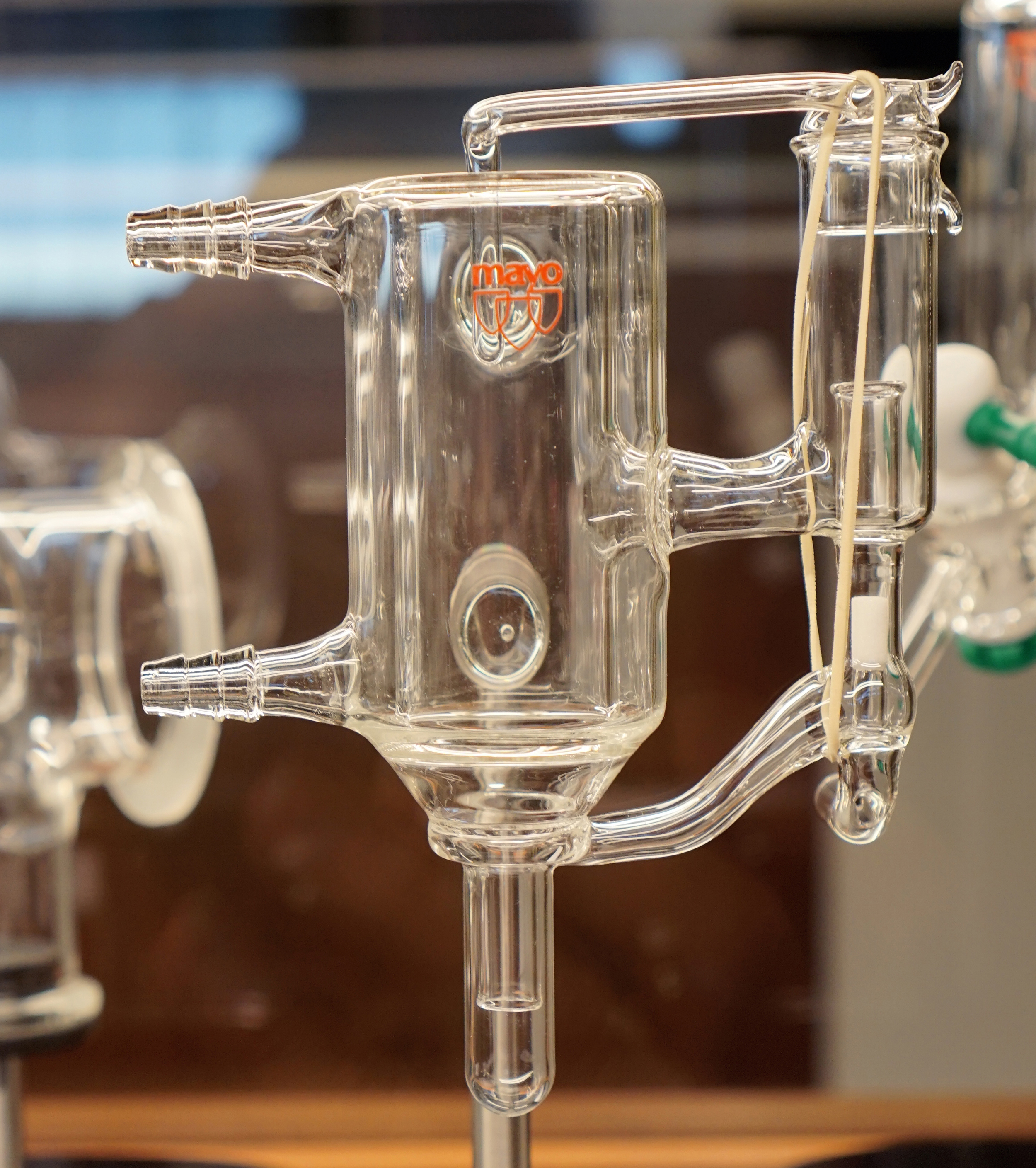 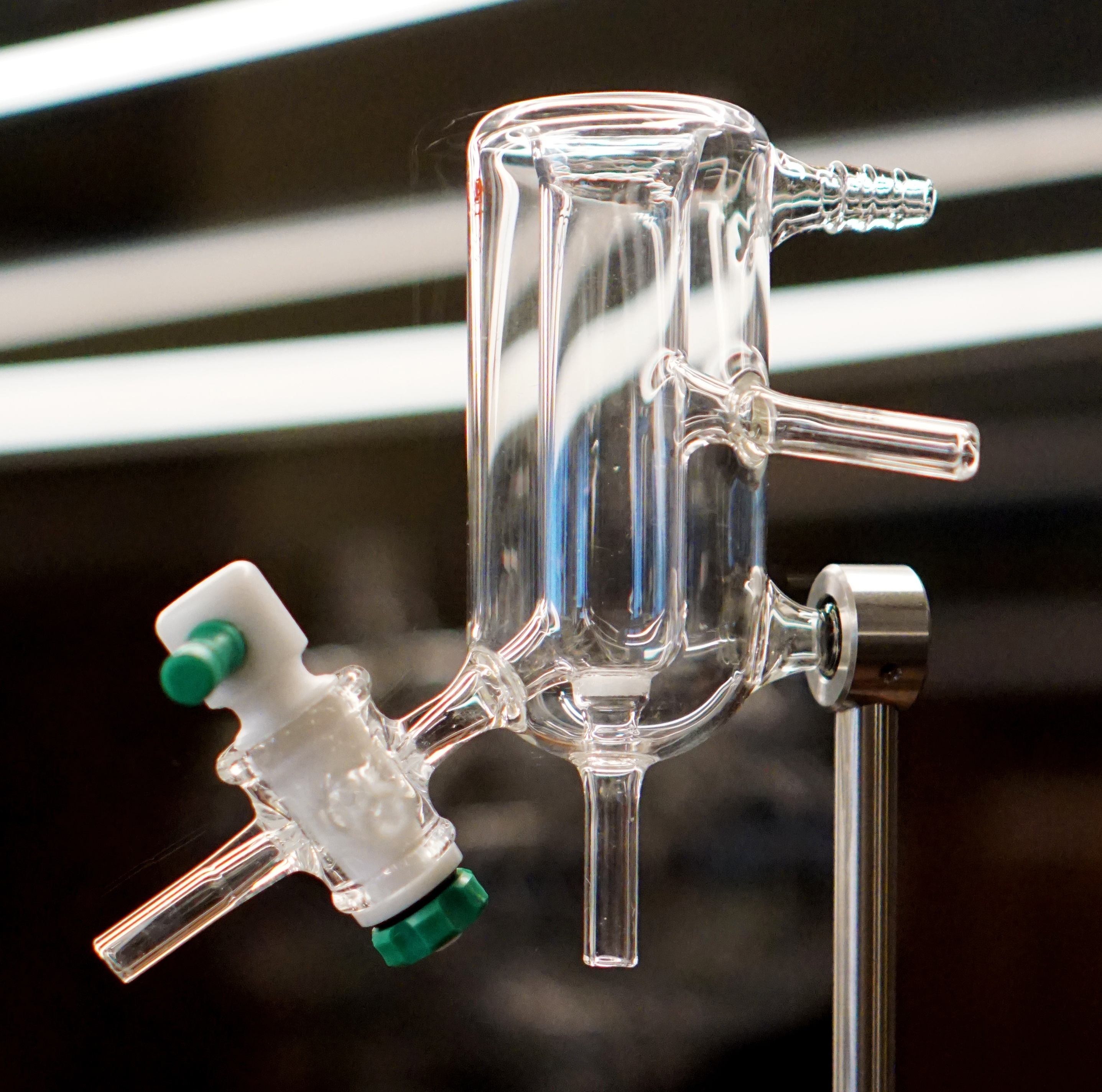 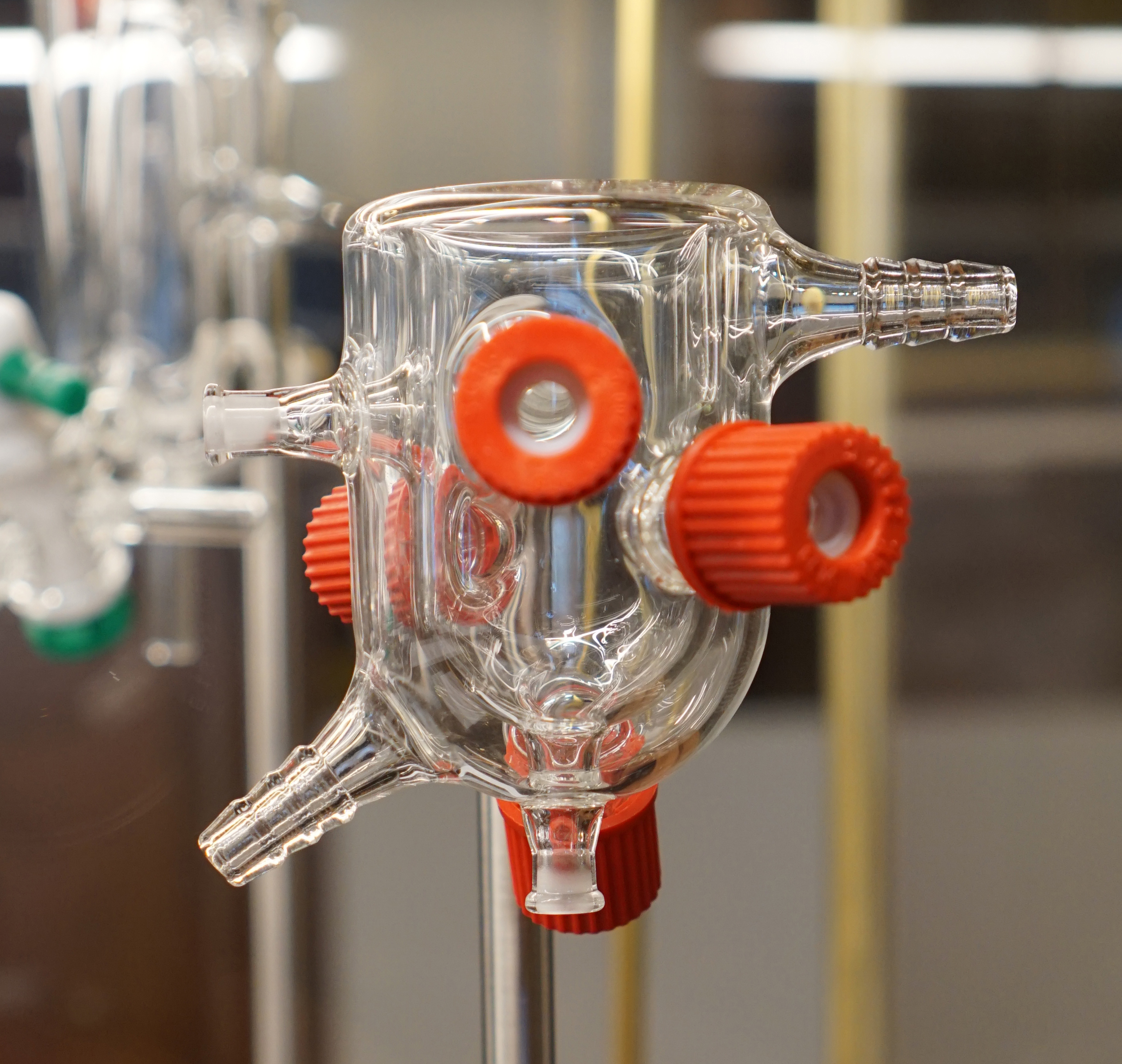 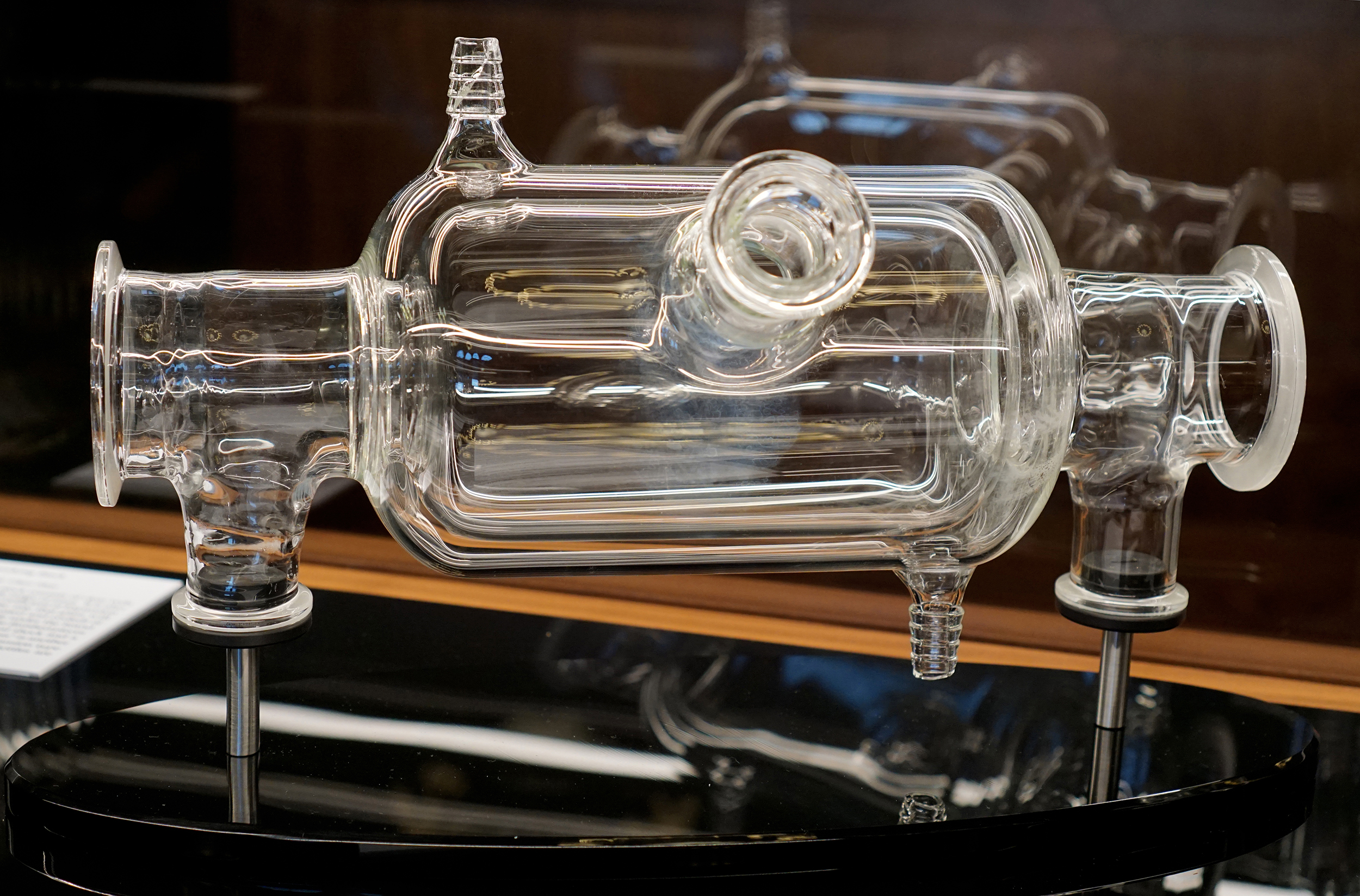 In 2008 the Mayo Clinic Neural Engineering Laboratories needed to measure neurotransmitters in deep brain structures of patients to help restore normal function of the brain caused by trauma or other disease states. Knowing that conventional electrode biomaterials could not supply a device that would last a patient’s lifetime, staff had to look for something different.

The new electrode needed to be biocompatible, oxidation resistant, nonbiofouling, carbon-based, and electrically conductive among other criteria. This list pointed to diamond as the best material, but there was a problem: diamond is an excellent electrical insulator, not a conductor. The one exception is natural blue diamond, such as the Hope Diamond now in the Smithsonian Institution, Washington, D.C. Boron impurities in the stone give it a blue color and also make it electrically conductive. Though Mayo Clinic had never made diamond before, the Engineering team developed a design and production process that created the Clinic’s first blue diamond in only four weeks. Glassblower Anderson and Dr. Kevin Bennet planned the glass chamber to have the ability to quickly modify the reactor if required, use high temperature measurement devices for control of the system, and allow the process to be observed. The reactor also needed to operate at 3,000 degrees F, and in a near vacuum. This exceptional collaboration between the glassblower and engineering staff (chemical, mechanical, and electrical) as well as machinists and technologists created a robust system without the need for significant debugging or redesign. 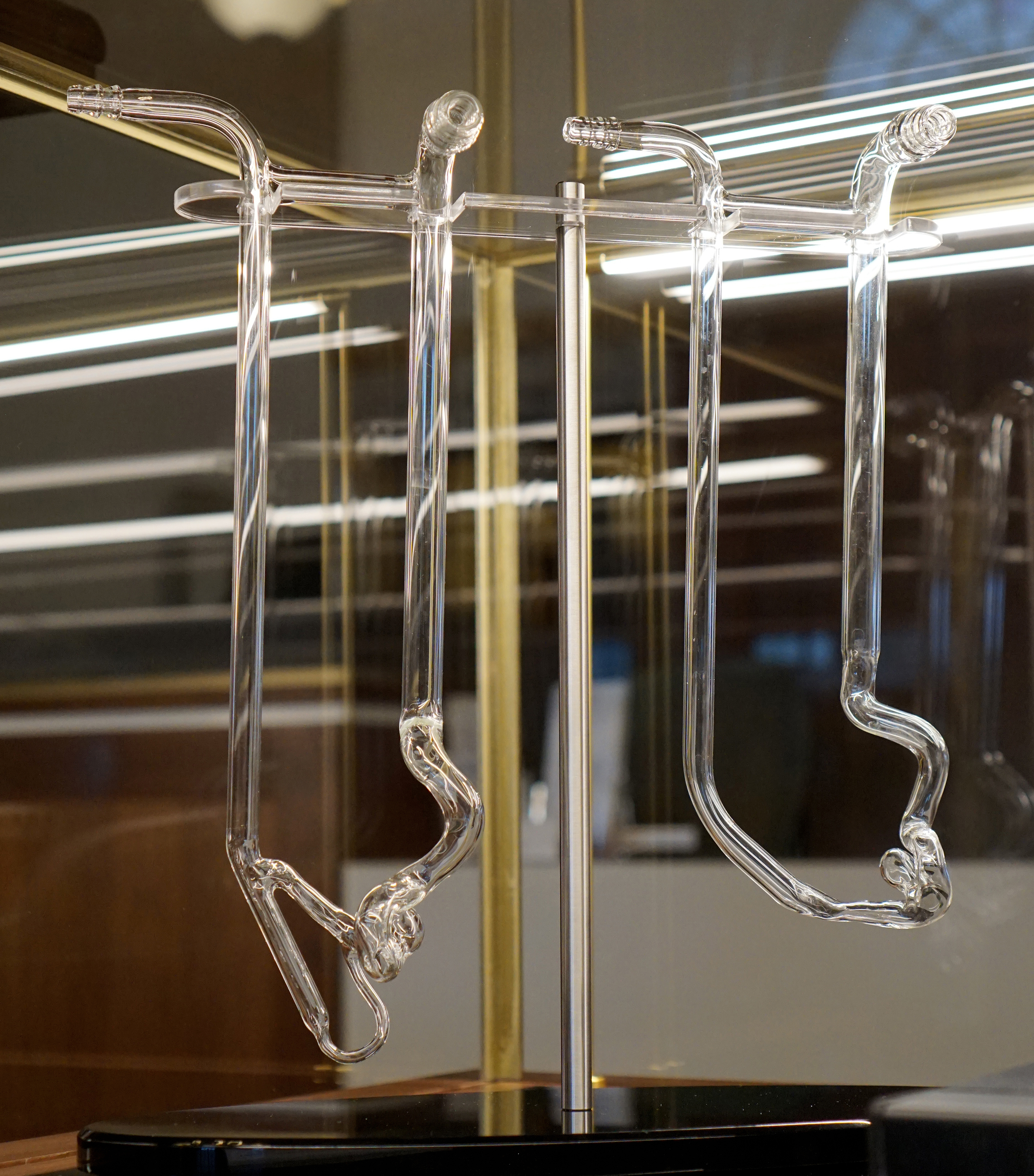 Up to six million people in the United States harbor unruptured intracranial aneurysms, or localized dilations in the walls of cerebral arteries in the brain. A rupture is generally catastrophic for the patient, but current techniques used to treat them (coiling and stenting) have potentially serious complications that must be carefully weighed against the future risk of rupture. Mayo researchers asked the glassblower to create patientbased glass aneurysm models that would help them study the hemodynamics (blood flow) of aneurysms in vitro using time-resolved laser 3D imagery. The goal is to identify key parameters of pressure, flow and velocity that will help physicians predict aneurysm rupture risk in patients.

This training aid provides Mayo Clinic fellows and residents with a safe way to learn and practice advanced endovascular skills. A glass replica of the aorta in its entirety with its major arterial branches, it can replicate aneurysmal disease of the aorta. Doctors can practice intricate procedures without being exposed to radiation or injuring a patient, both of which are possibilities in the operating room during aortic stent placement. It also promotes better understanding of the most common types of aneurysms, as well as the behaviors and tendencies of the devices that will be used in surgery.

Overview of Liver Perfusion Apparatus
Perfusion is a method for keeping tissue functioning outside of the body. The perfusion of human and animal tissue has enabled studies covering a range of topics, such as tissue function, genetics and vaccines, and is particularly valuable in the research and treatment of liver disease. These devices have also been provided to Mayo collaborators in many different countries.

(a) Liver perfusion apparatus, early version Harry Nunamaker Mid-Twentieth century From the Collection of the Mayo Clinic W. Bruce Fye Center for the History of Medicine 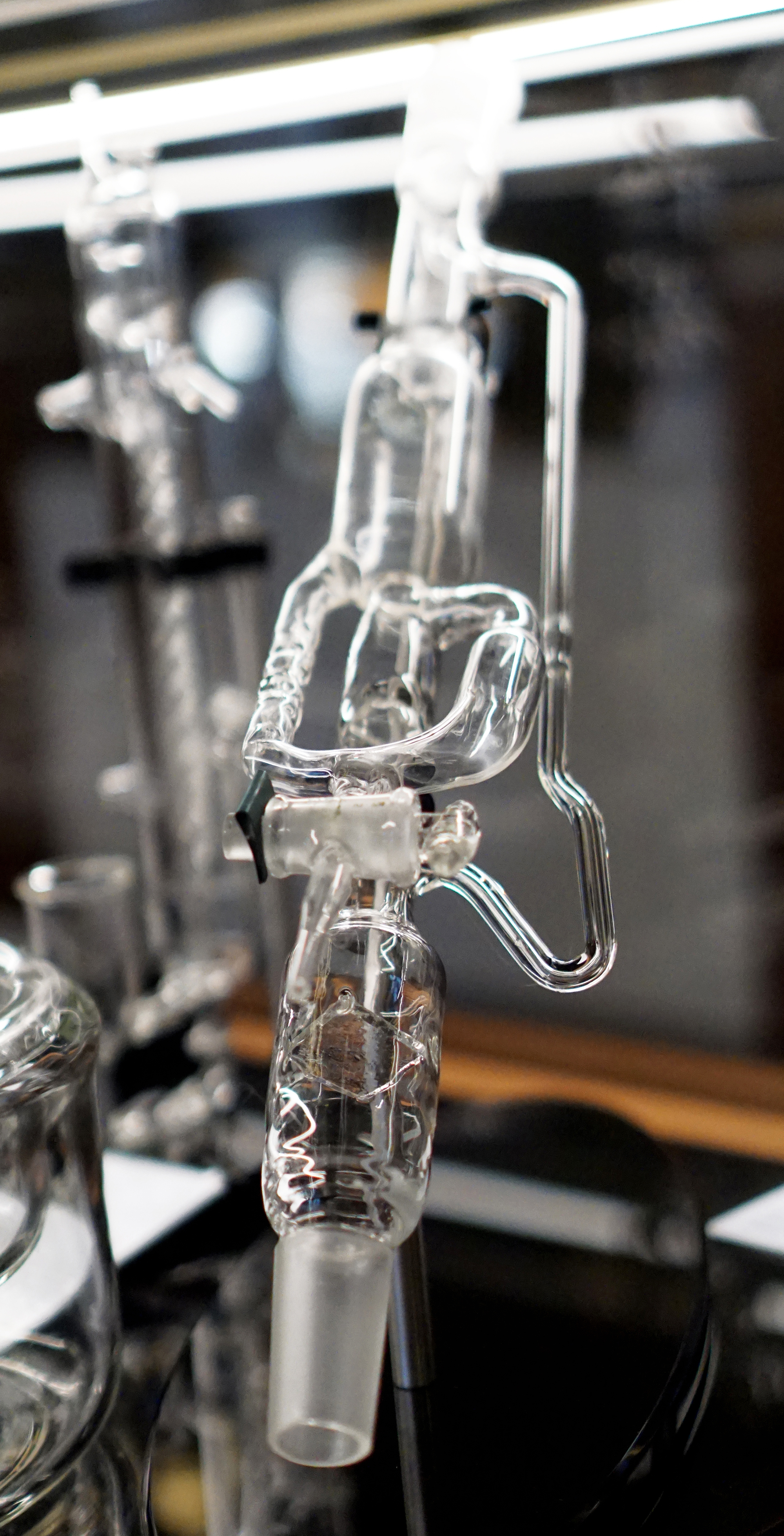 Harry Nunamaker designed and fabricated this apparatus based on a much larger and less efficient version used previously.

This apparatus consists of two glass columns that are mounted in an enclosed environment that controls temperature and humidity. It is a recirculating closed system in which oxygenation is achieved by having blood pumped through the center column to the upper reservoir where it is then released into the outer twisted column. As the blood slowly flows down the twisted column it becomes oxygenated. 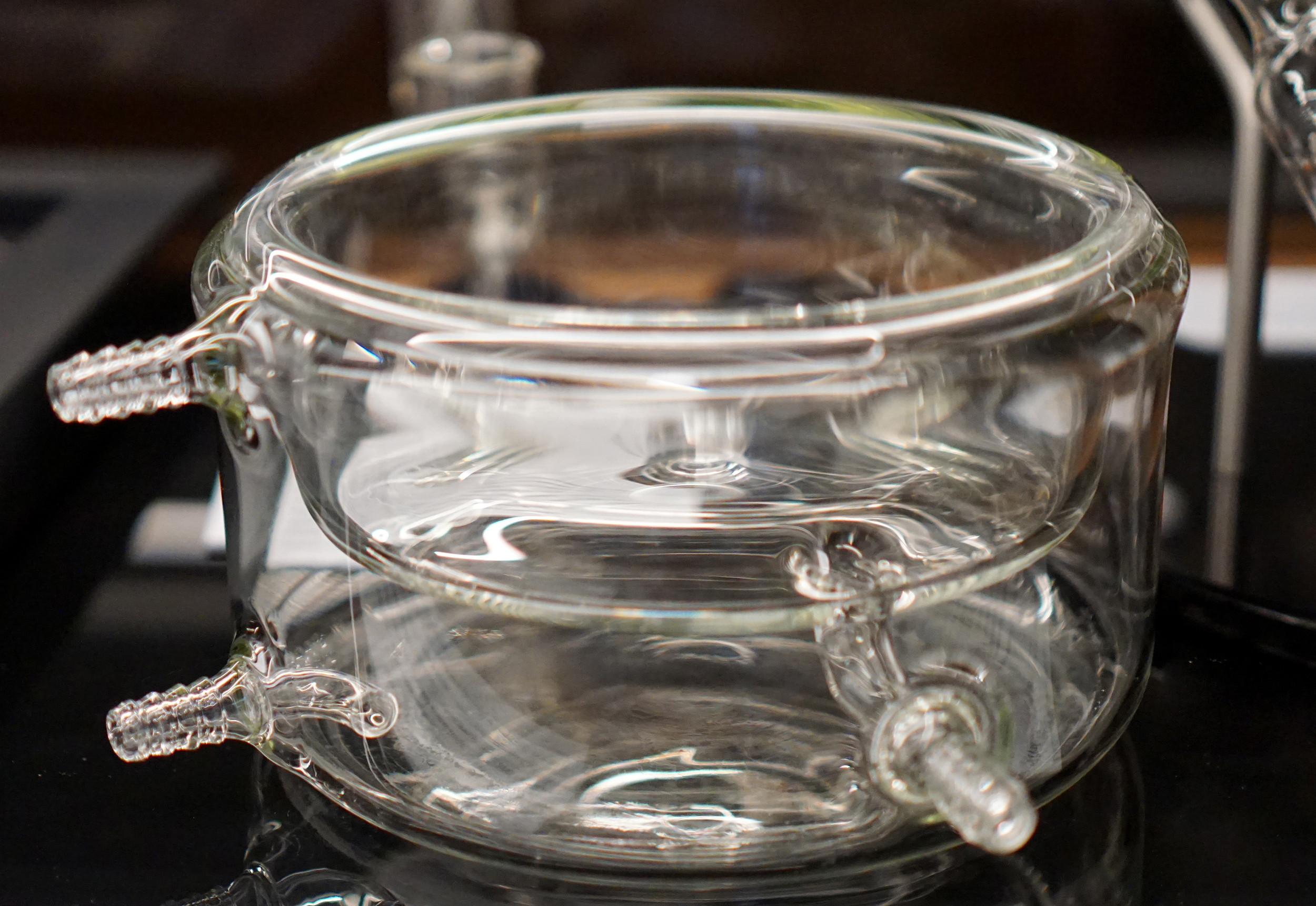 This custom system was created for use in transplantation research. Improvements in the design increased both the average viability of the liver cells and the average yield of cells per gram of liver tissue. The primary human cells isolated using the system have been used successfully for the development of an animal model of human liver cell engraftment, vaccine testing, virus traits, studying the disease mechanism of the liver and working towards the creation of an artificial liver.

This exhibit was designed and curated by the staff of: