A Glimpse Into the History of Chinese Medicine: Selections From the W. Bruce Fye History of Medicine Library

This exhibit shows both books and artifacts from the W. Bruce Fye History of Medicine Library collection. Some of these items were donated in the 1960s by the family of Dr. John H. M. Fallon (1901-1951) who was appointed a Fellow in Surgery at Mayo in 1927.

Special thanks to Dr. Kai-Nan An, Professor Emeritus, Mayo Clinic, for help with translation and contents of this exhibit.

Ts'ang Kung was the first to record personal observations of clinical cases. He was modest in that he admitted his prognoses were not always correct and that he could not cure any disease unless the pulse indications were favorable. He left no writings behind.

Chang Chung-ching is reputed to be the greatest physician China ever produced and is spoken of as the Chinese Hippocrates. Little is known of his life. However, he was fond of study and noted for his thrift and filial piety (a virtue of respect for one's parents, elders, and ancestors).

A contemporary of Chang Chung-ching was Huo T'o. He was the most famous surgeon of China and reputed to be worshipped as a god of surgery. His fame rests chiefly on his discovery of the use of anesthetics. He administered an effervescing powder in wine to patients which produced numbness and insensibility. The composition of the narcotic is not known. Huo T'o attended to elite people of that time; among them the King of Wei who appointed him as his personal physician. 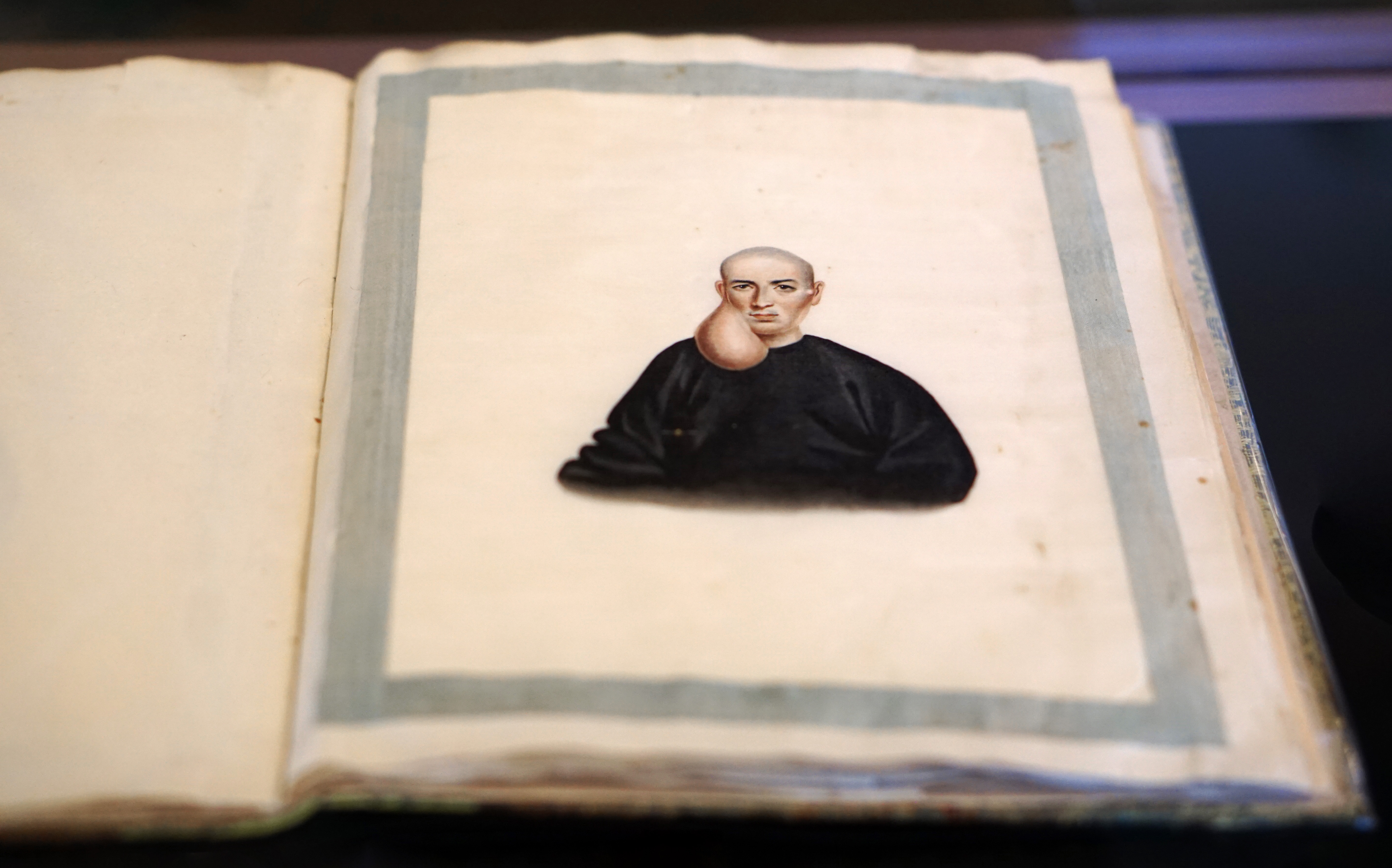 Lam Qua was a successful artist living in Canton in the nineteenth century. He had been the senior pupil of George Chinnery, a British portraitist of the academic school. Chinnery, whose own master was Joshua Reynolds, became the first English painter to settle in China.

Lam Qua became an expert in portraiture, which had been virtually absent from the Chinese tradition. The Rev. Dr. Peter Parker (1804-1888) started work in China in 1834 as a medical missionary, and Lam Qua's nephew became Dr. Parker's apprentice. In gratitude for Parker's work, Lam Qua offered to paint Parker's most interesting cases. Lam Qua's only proviso was, "As there is no charge for cutting, I can make none for painting." The paintings were usually focused on documenting gross pathology, especially that of tumors. 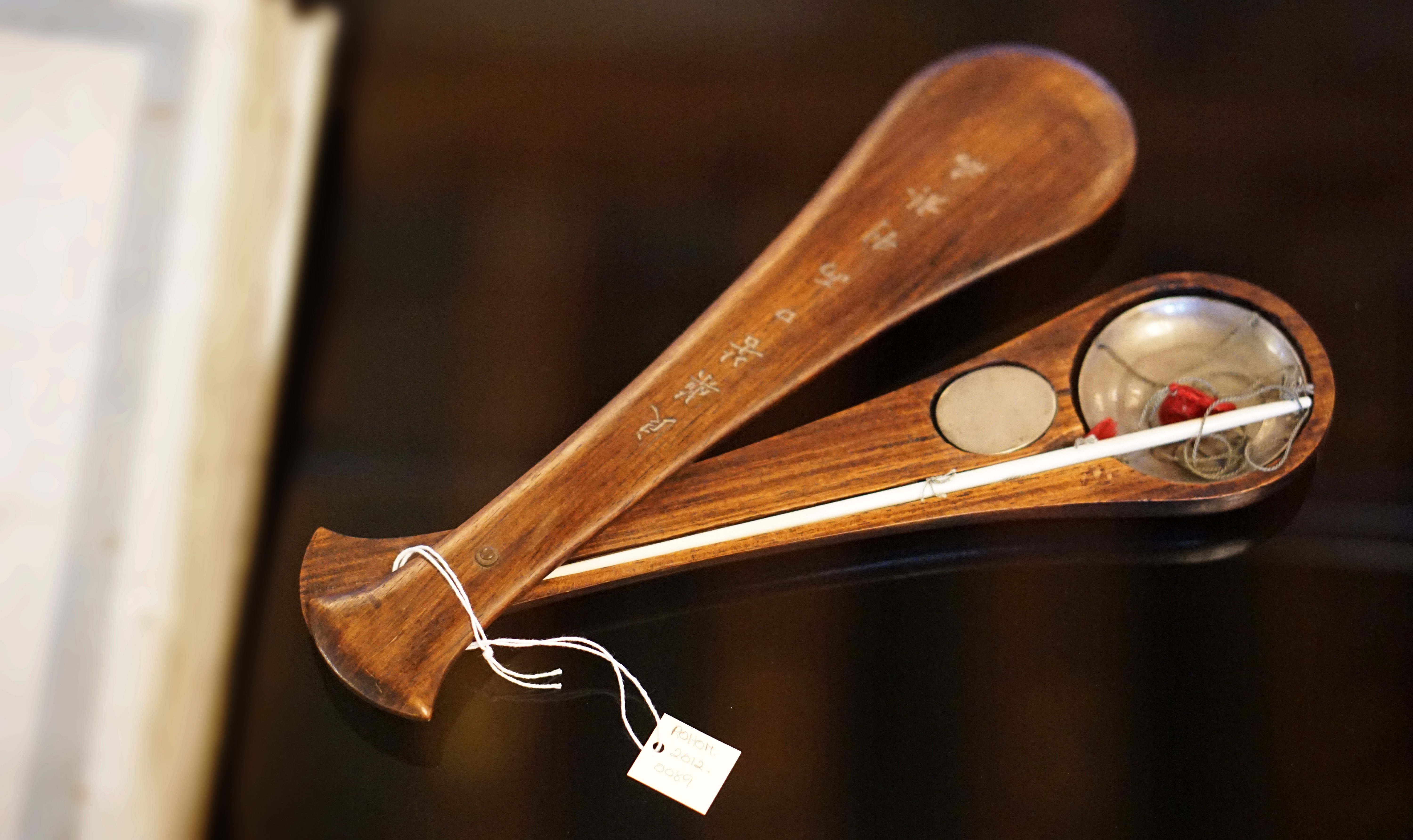 This type of traditional Chinese balance scale is often referred to as the Chinese "opium" scale by Westerners. This is a rather misleading definition, however. Whereas it had been used in the opium houses around China in the late Qing dynasty, it had been used long before that in all Chinese pharmacies for weighing herbs and other traditional organic Chinese medicines.

The Chinese characters engraved on the top of the folding case say, "Good medicine tastes bitter, but this is good for your disease." 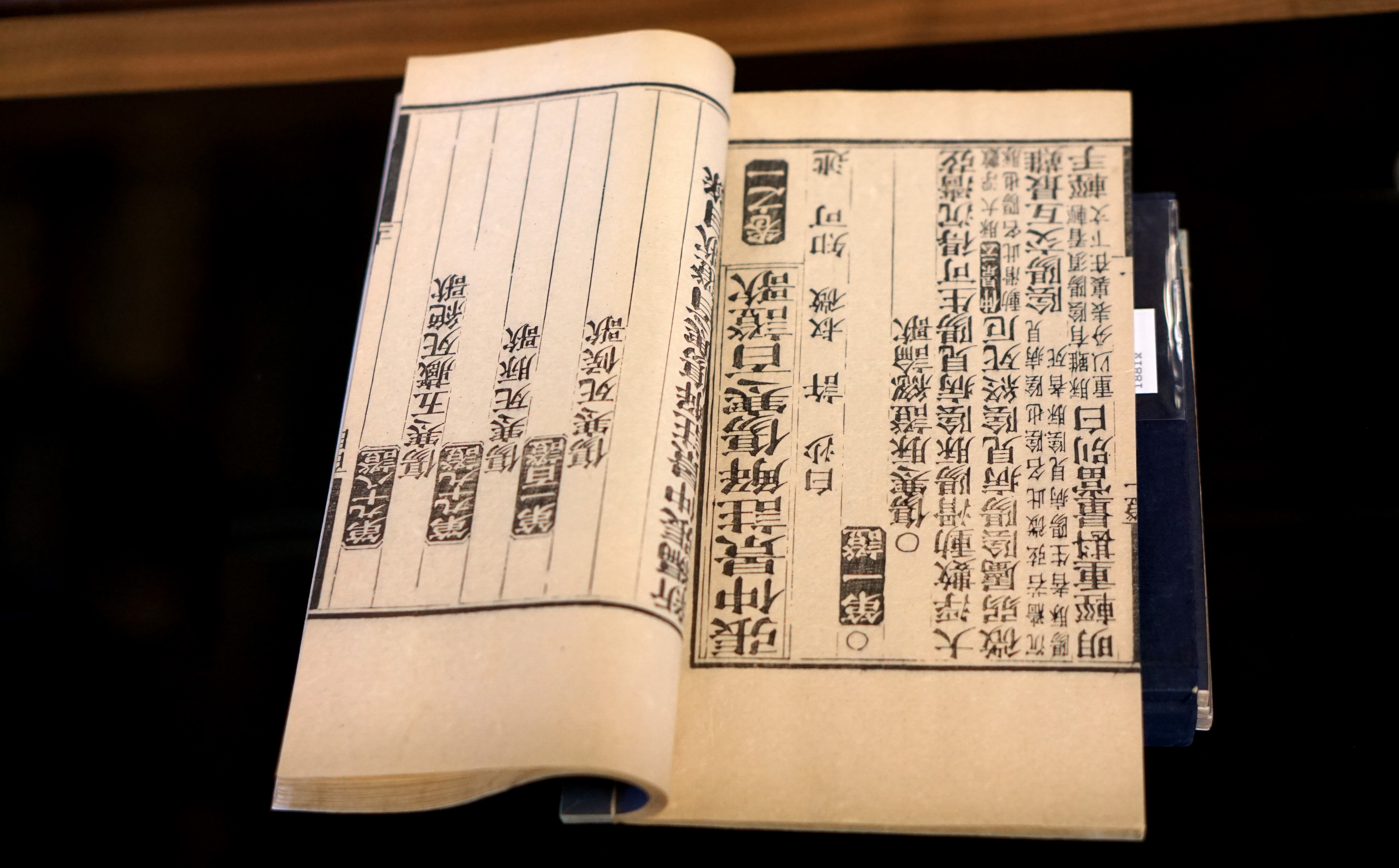 Zhang, Zhongjing (a.k.a. Chang Chung-ching) is reputed to be the greatest physician China ever produced and is spoken of as the Chinese Hippocrates. He was a pharmacologist, physician, inventor and writer of the Eastern Han dynasty. He was born in Nanyang in today's Henan province and became interested in medicine as a child. He began to learn from his uncle Zhang Bozu who was a local herb doctor. He is particularly noted for his Essay on Typhoid (Shang-han-lun). This work does not, as the name implies, deal with typhoid only, but with other fevers as well. 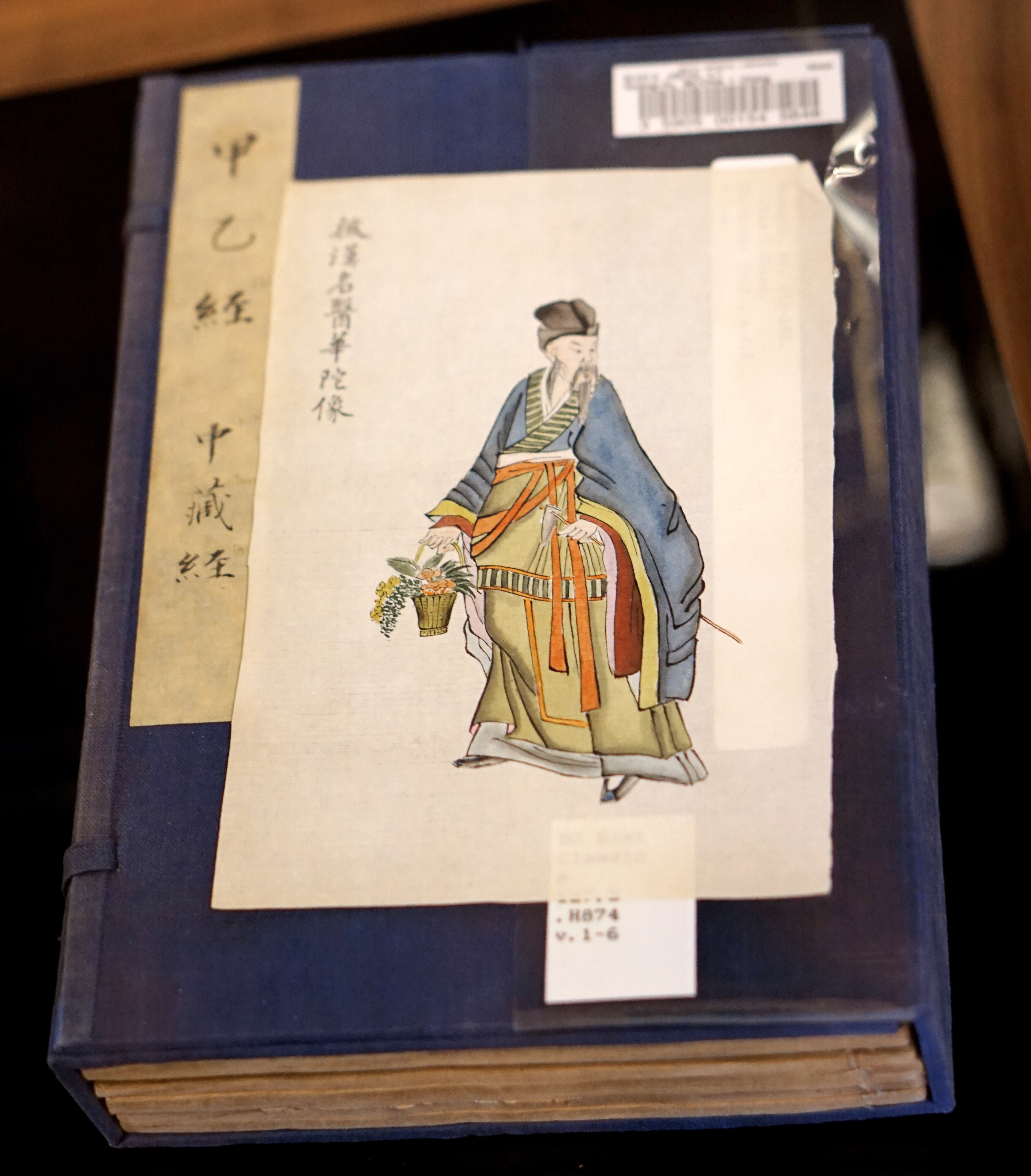 Huangfu Mi was born in a poor farming family in Anding Chaona (today's Lingtal of Gansu province). He believed that only when you had given up the pursuit of fame and fortune could you cultivate great virtues and do no damage to your life.

He suffered from hemianesthesia and decided to dedicate himself to the study of medicine, especially acupuncture. He identified 349 acupoints (acupressure points), including 300 that were on both sides of the body and 49 on only one side. He wrote extensively on acupuncture.

A native of Sanqu (present-day Liudu, Quzhou, Zheijiang) and a renowned acupuncturist of the Ming dynasty, Yang Jizhou was a physician to Emperor Jiajing and a medical official at the Imperial Academy of Medicine.

This work, rich in contents, has ten volumes. It discusses the origins of acupuncture and ancient works on the subject, and summarizes the experience of Chinese historical practitioners. It also discusses the uses of the main and complimentary acupuncture points, shows detailed knowledge of human anatomy of the inner organs, and introduces the methodology of acupuncture and its treatment of illnesses as well as various herbal medicines.

In the final centuries of China's Qing dynasty, intricately carved ivory medicine dolls were an ailing woman's only option for dealing with health problems. From the 1300s to the late 19th century, China's Ming and Qing dynasties had ushered in a cult of chastity that made it impossible for a doctor to physically examine a female patient or for her to undress before him. Instead, she sat behind a curtain or bamboo screen. Her hand, or that of a female attendant, would poke through the drapes or screen and gesture toward the naked body of the medicine doll. If the patient had difficulty breathing, she might run a finger along the doll's curved chest. For headache, the bump of a bun. After studying these cryptic communications, the doctor would issue his diagnosis.

With the total embargo on ivory in 1990, examples of diagnostic dolls of this caliber rapidly disappeared. The quality of our example is particularly fine. 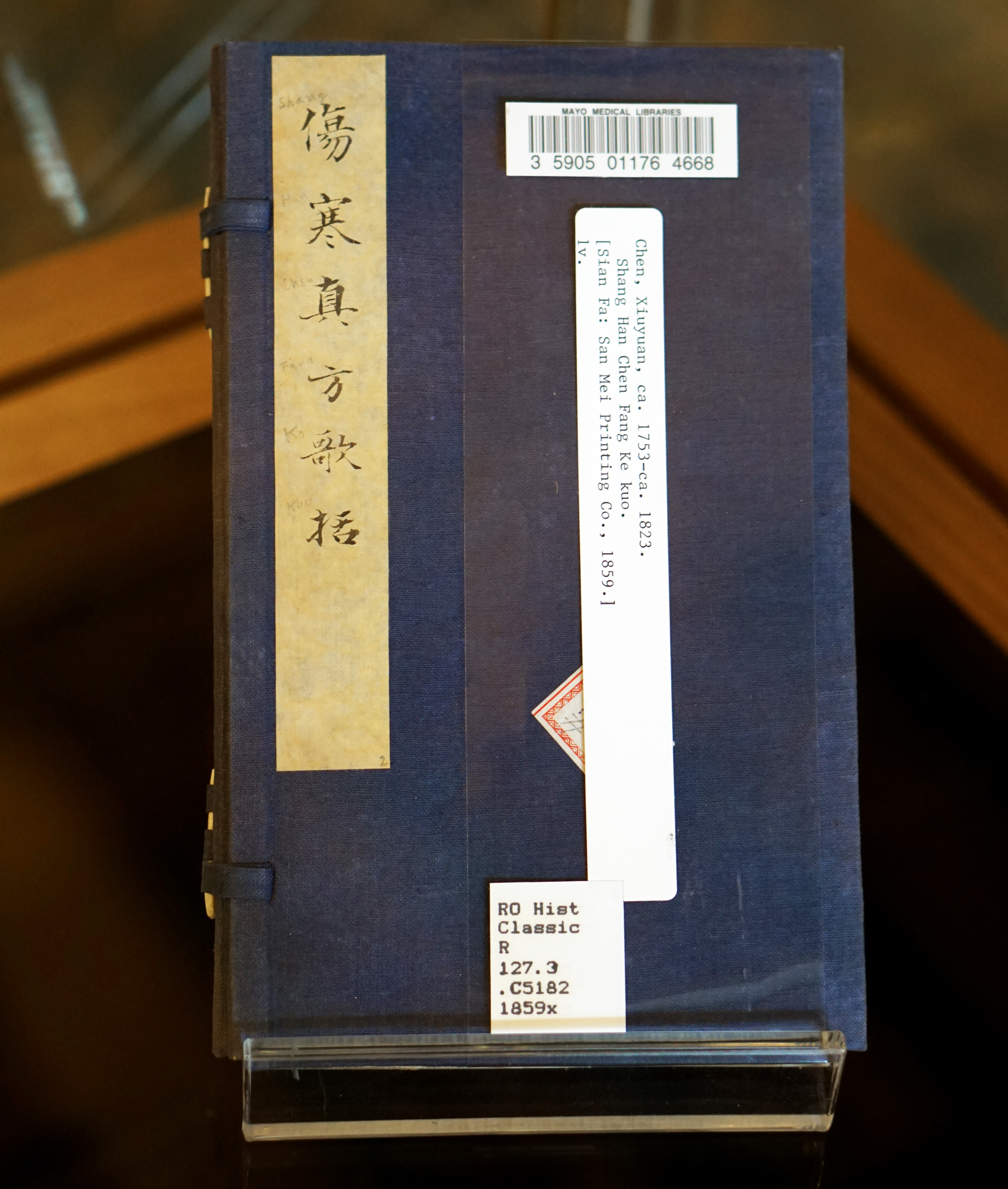 Chen was a well-known scholar who specialized in studying treatment of the common cold, its variants, and complications. This title deals with typhoid fever and contains songs. Rhymes and songs in Chinese medicine were directed at students and practitioners. Their function was to aid learning. Chen wanted these songs to remind practitioners of the basic fundamentals of the field. 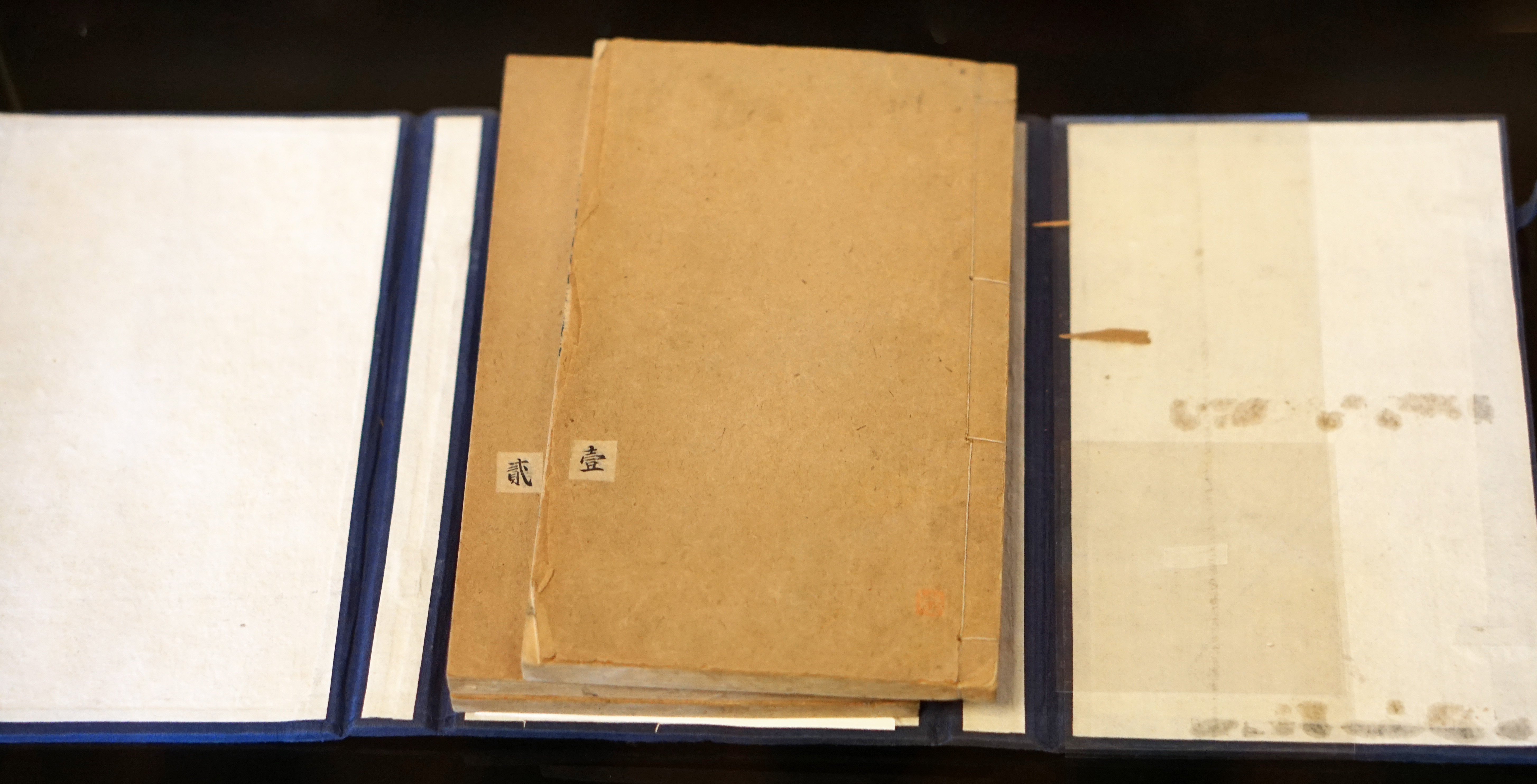 The earliest known form of (paper) bookbinding in China is "butterfly binding," which was invented during the Song dynasty (ca. 1000 CE). Single-printed folio pages were pasted together and folded in a stack, creating a book in which pairs of printed pages alternated with blank ones. This was followed by "wrapped back binding," in which the folios were compiled with the image on the outside and the open ends at the spine. Stitched binding developed from wrapped back binding in the sixteenth century.

The paper used as the leaves is usually xuan paper. This is an absorbent paper used in traditional Chinese calligraphy and painting. Stronger and better quality papers may be used for detailed works that involve multi-colored woodblock printing. The covers tend to be a stronger type of paper, dyed dark blue. Yellow silk can be used, which is more predominant in imperially commissioned works. The cover is then backed by normal xuan paper to give it more strength. Hardcovers are rare and used only on very important books; the silk cord is almost always white. The cases for the books are usually made of wood or book board, covered with cloth or silk and the inside is covered in paper.

After a group of books is printed, they are often put in a case. The photo above illustrates a cloth case that is constructed from boards that have a cloth upholstering. Traditional cloth cases are a single line of boards attached together and covered by the cloth; the insides are papered. The stack of books is placed on the middle board. The left-hand boards wrap the left side and the front of the books. The right boards wrap the right side and on top of the left side boards. The right side board has the title tag pasted on the top right-hand side. The right-most edge has a lip on which two straps with ivory or bone tallies are connected. These straps are pulled down the left side to loops where they are inserted to secure the whole case together.

This exhibit was designed and curated by the staff of The W. Bruce Fye History of Medicine Library. All books and artifacts are from the Library collection.