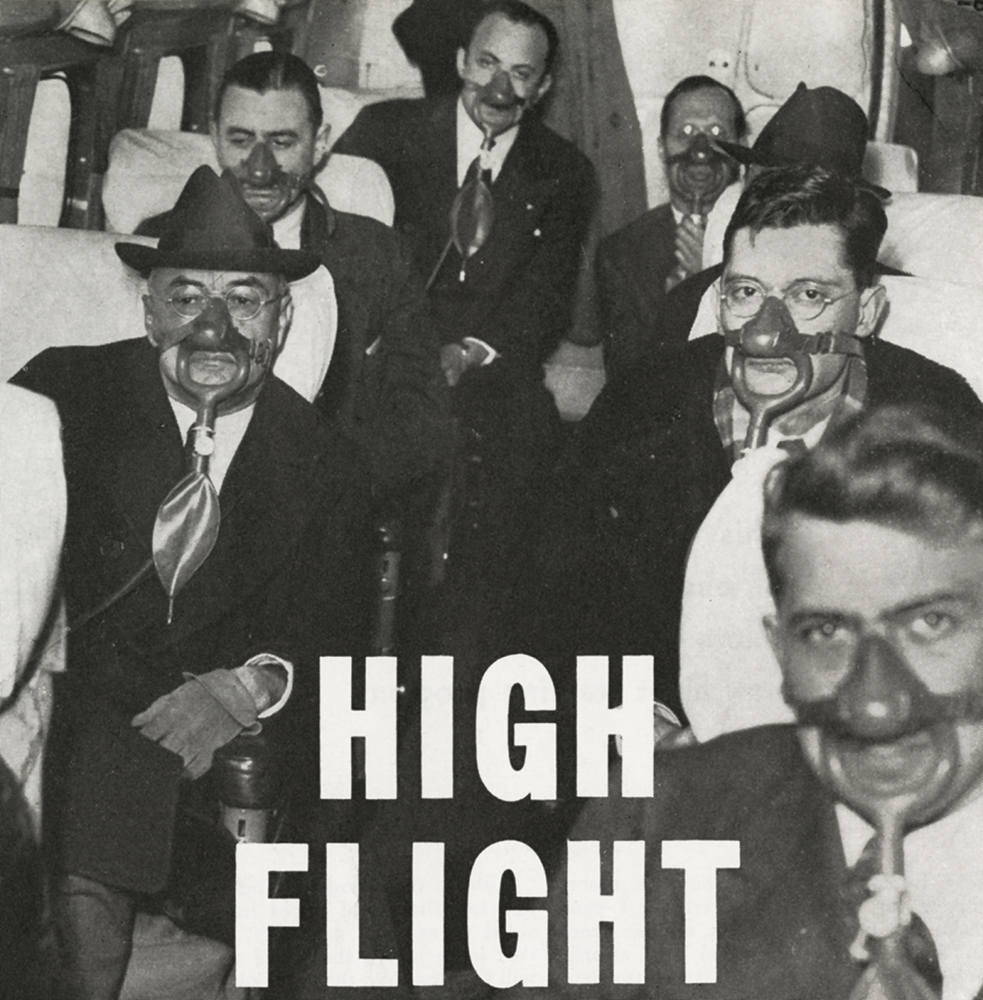 During World War II the Mayo Clinic Aero Medical Unit worked with Army and Navy pilots to develop the anti-gravity suit and oxygen mask that would allow pilots to fly faster, higher, and make more maneuvers in the air.  The Clinic charged the U.S. government $1 per year for the Aero Medical Unit’s work.  Modern fighter pilots still wear a flight suit and oxygen mask that have roots in the Mayo versions.

The BLB mask, named after its designers, Dr. Walter M. Boothby, Dr. W. Randolph Lovelace, and Dr. Arthur H. Bulbulian, was initially developed as part of Mayo’s response to an inquiry from Northwest Airlines regarding the efficacy of providing oxygen during regular passenger service at high altitudes.  Dr. Boothby’s research into oxygen delivery for medical purposes prior to 1938 made for a straightforward transition into aeromedical research.  In the early 1940s, the Mayo team modified the BLB mask and its oxygen equipment many times to meet the special needs of the military.  In the decades following World War II, the BLB oxygen mask was a prototype for all subsequently developed military and medical oxygen masks. 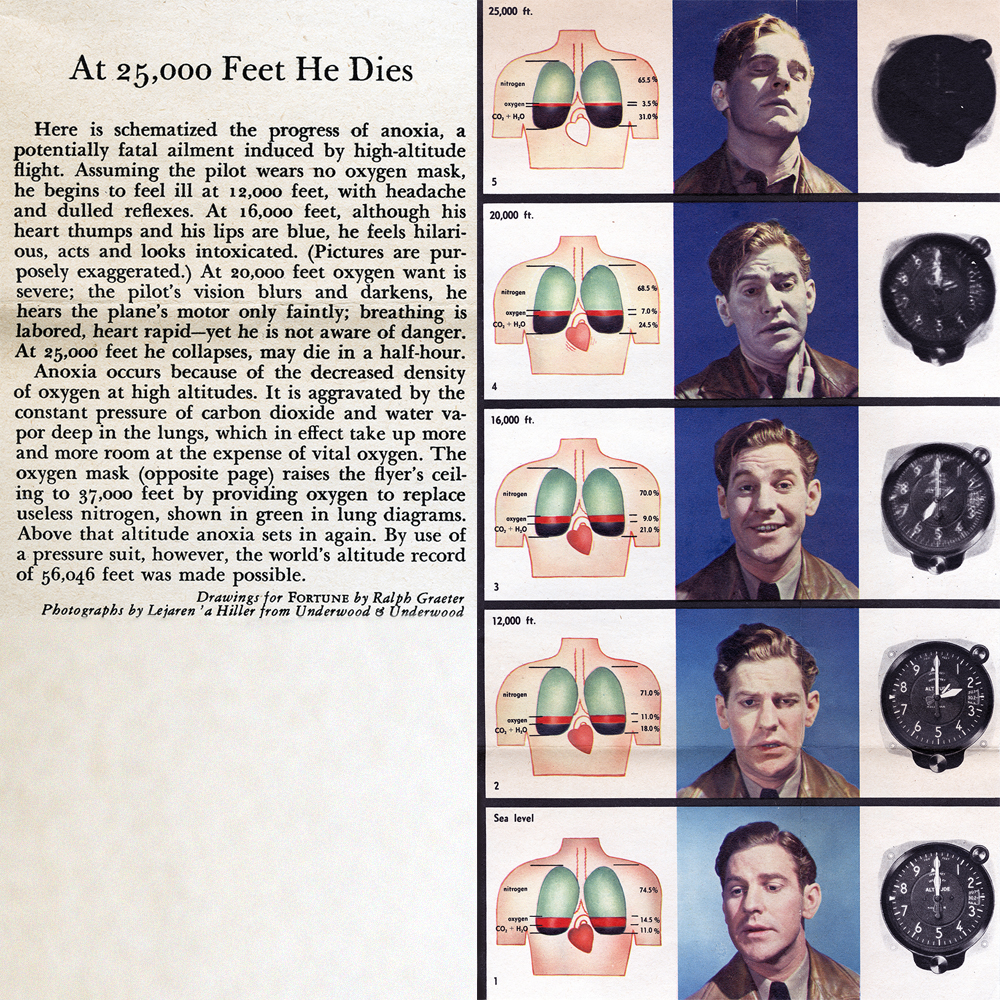 In the 1930s, investigators recognized that hypoxia, a condition of the body in which the tissues are starved of oxygen, was an increasingly significant factor in pilot error and plane crashes worldwide.  In its extreme form, where oxygen is entirely absent, the condition is called anoxia. Newly designed aircraft were able to fly higher than 10,000 feet which subjected the body to decreased oxygen density.  Impairment of both physical condition and judgement increases as altitude climbs.

This chart from the February 1942 issue of Fortune magazine shows the progressive stages of oxygen deprivation induced by high-altitude flight. 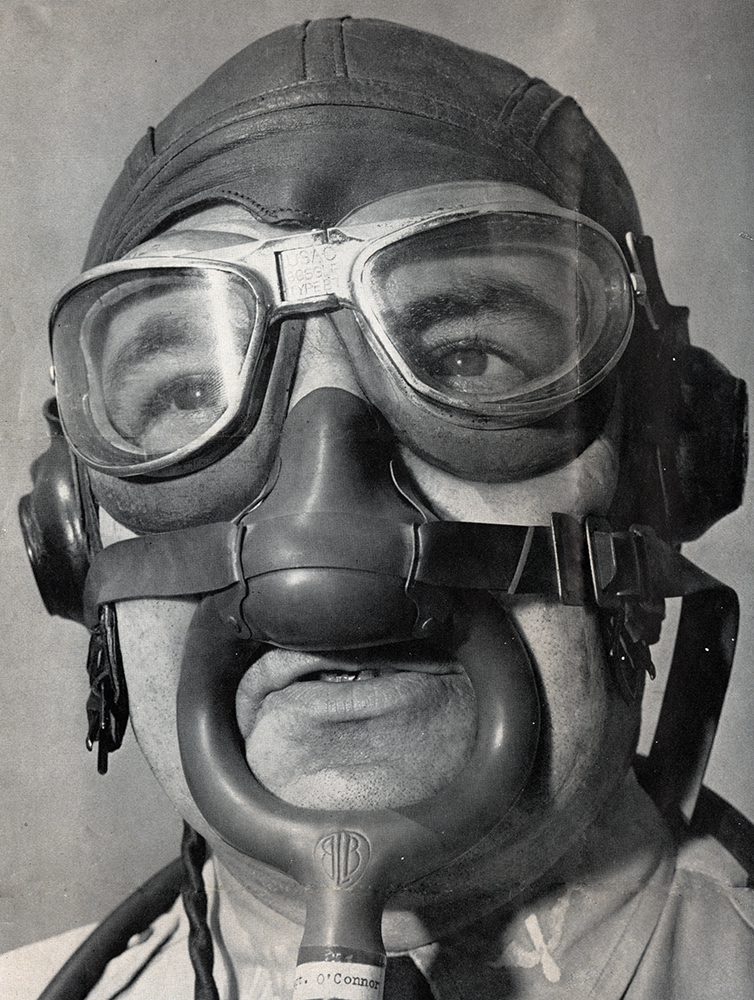 The Boothby-Lovelace-Bulbulian (BLB) mask and its variations originated in 1938 just prior to World War II.  The mask was tested in three phases:  First in the Mayo Clinic Aero Medical Unit, then in high-altitude experiments conducted using a low-pressure chamber at Wright Field, Ohio, and finally in flight.  Dr. Will and Dr. Charlie Mayo, both of whom died a few months after a highly publicized test flight to Boston in 1939, stated that “the work is a splendid commentary on cooperative effort.” 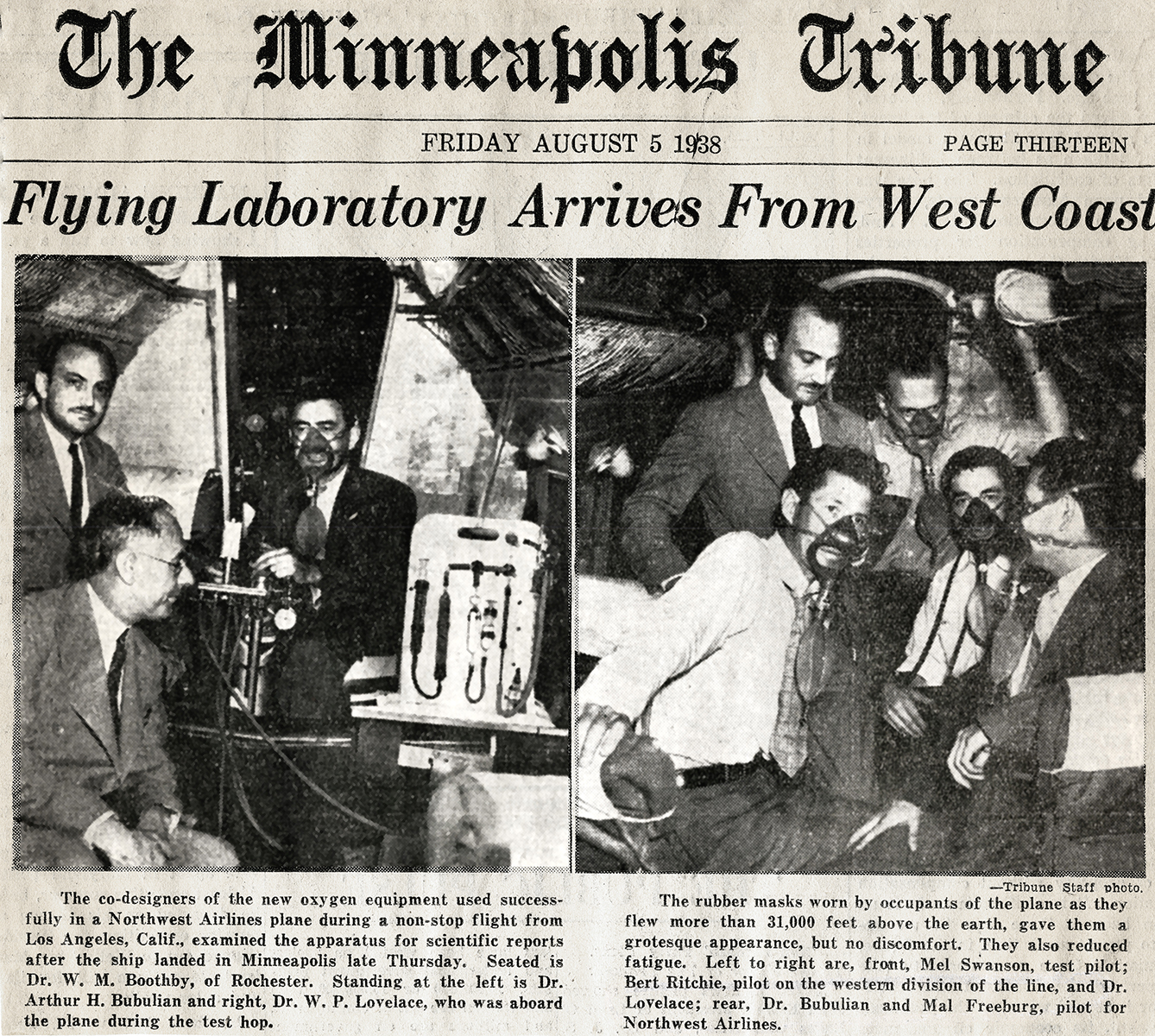 A clipping from the August 5, 1938, edition of the Minneapolis Tribune shows BLB mask co-designers arriving from Los Angeles after a seven-hour, 40 minute early test flight to Minneapolis.  The plane flew at a speed of over 200 mph and, for one third of the flight, at an altitude of 31,000 feet.  Pictured in the photo at left are: Dr. Boothby (seated in front), Dr. Bulbulian (standing), and Dr. Lovelace (seated in back). 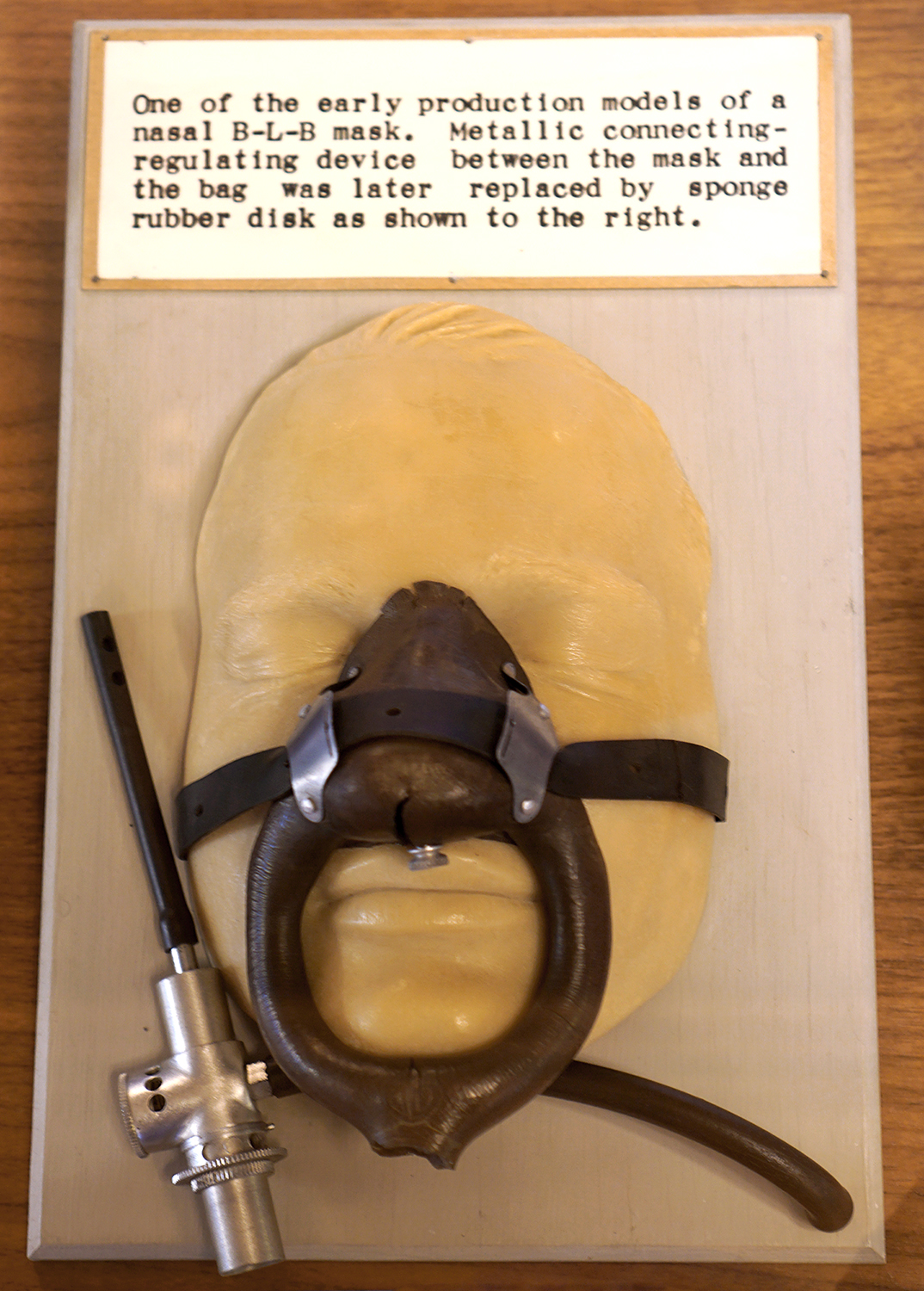 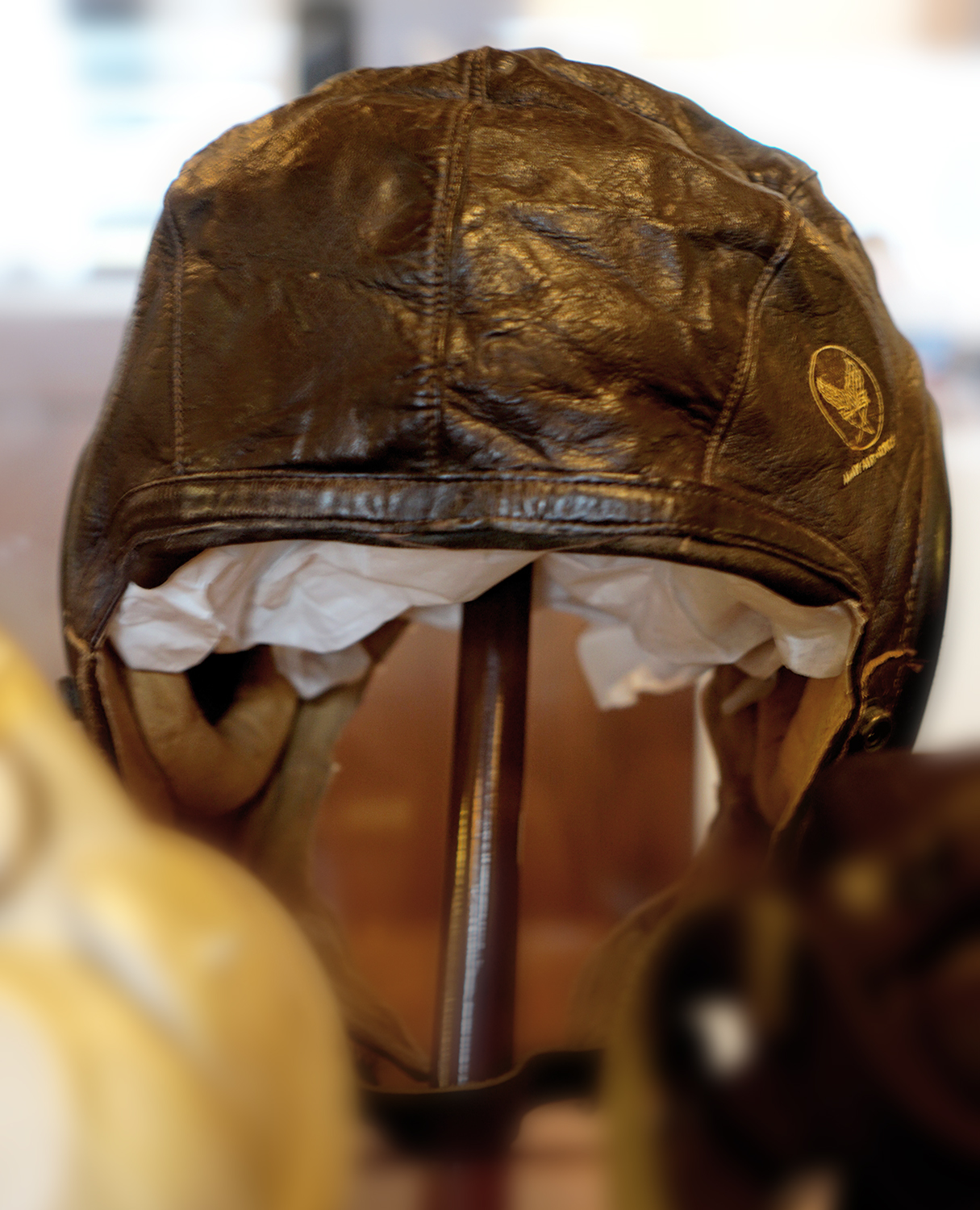 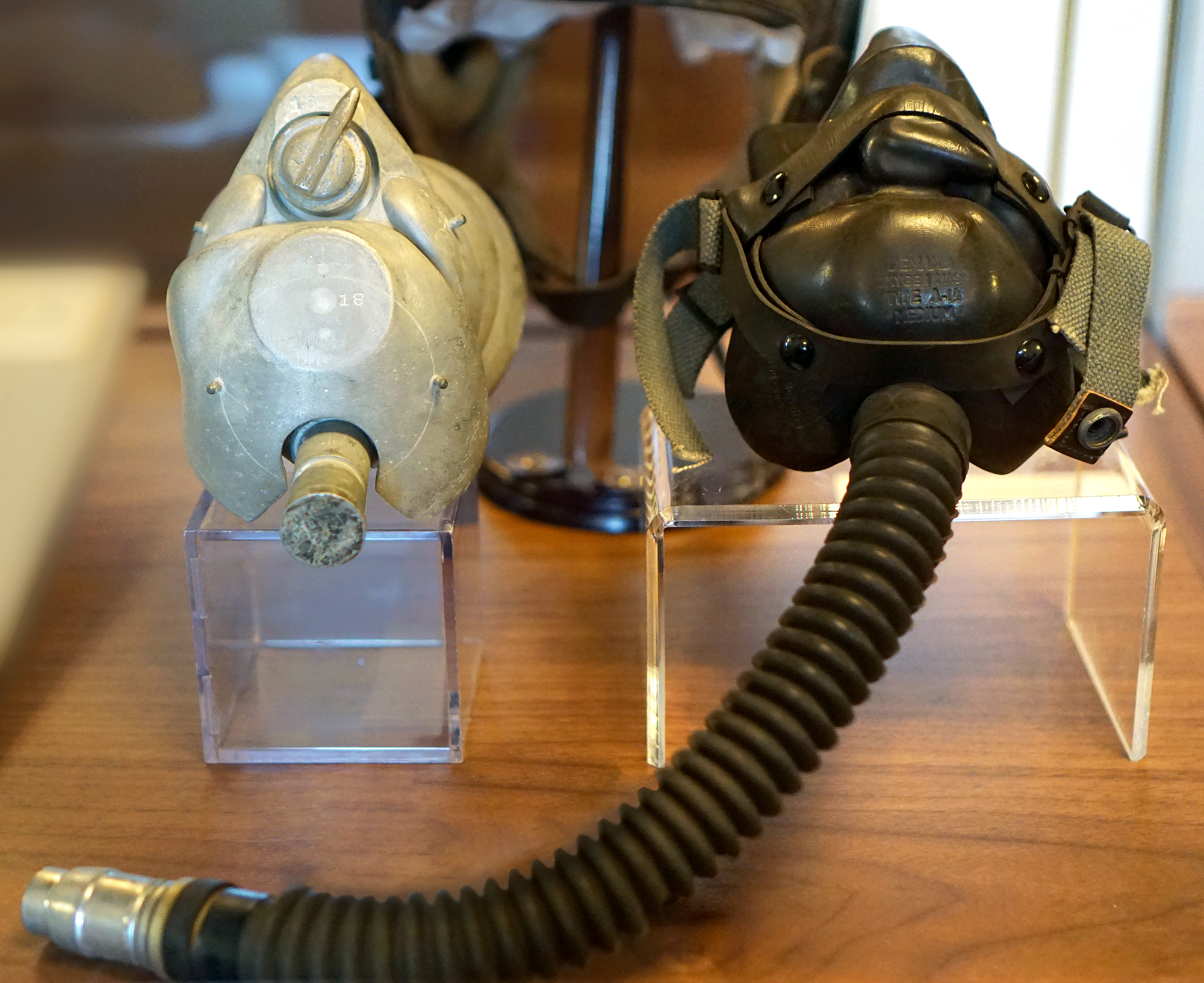 This mold [left] for the A-14 came from Dr. Bulbulian’s personal collection of oxygen mask-related items.  The mask displayed with it is a military surplus example.

Called a “benchmark” in oxygen mask development, the A-14 mask was modified by Dr. Arthur Bulbulian from earlier versions of the BLB mask.  It made its combat debut in 1943 and was so well-designed that improved models remained in regular use well into the 1980s. 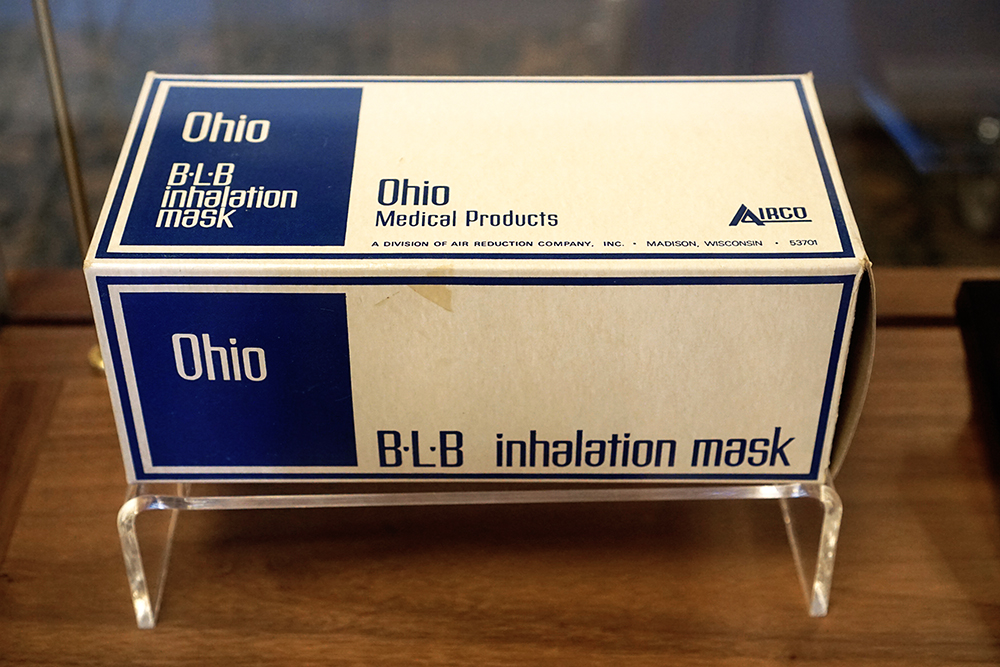 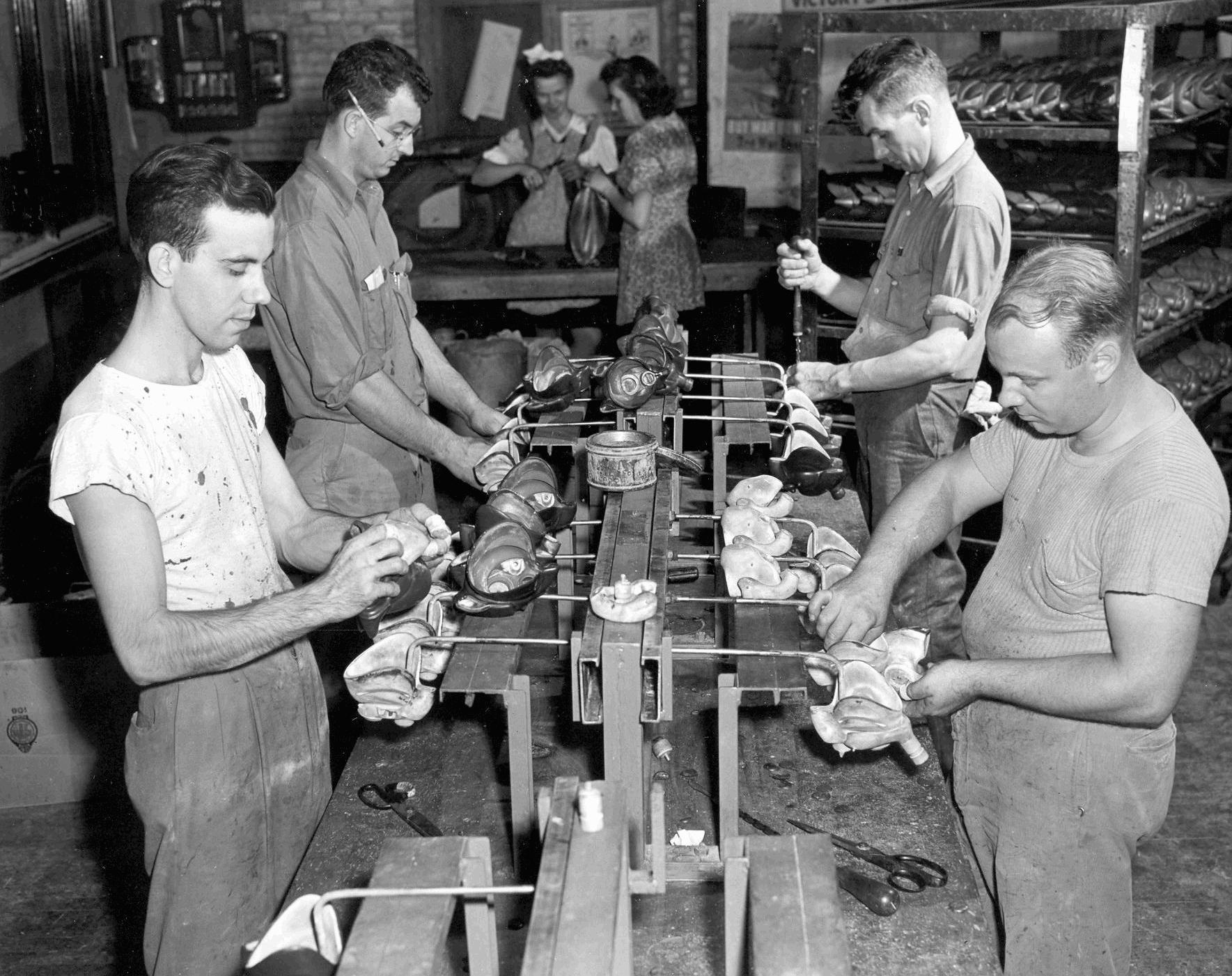 American Anode, Inc., a B.F. Goodrich Company affiliate, produced the BLB inhalation mask and the later A-14 mask.  Made of Anode latex compounds and rubber parts, the masks were unaffected by sub-freezing temperatures and fit snugly without interfering with the pilot's goggles or earphones.  The pilot could talk into his microphone without removing the mask and without speech distortion.

In 1942, Charles Lindbergh came to the Mayo Aero Medical Unit’s low-pressure research chamber to simulate what it felt like to parachute jump from an F-47 at 40,000 feet.  Here he is pictured outfitted with Mayo’s BLB mask. 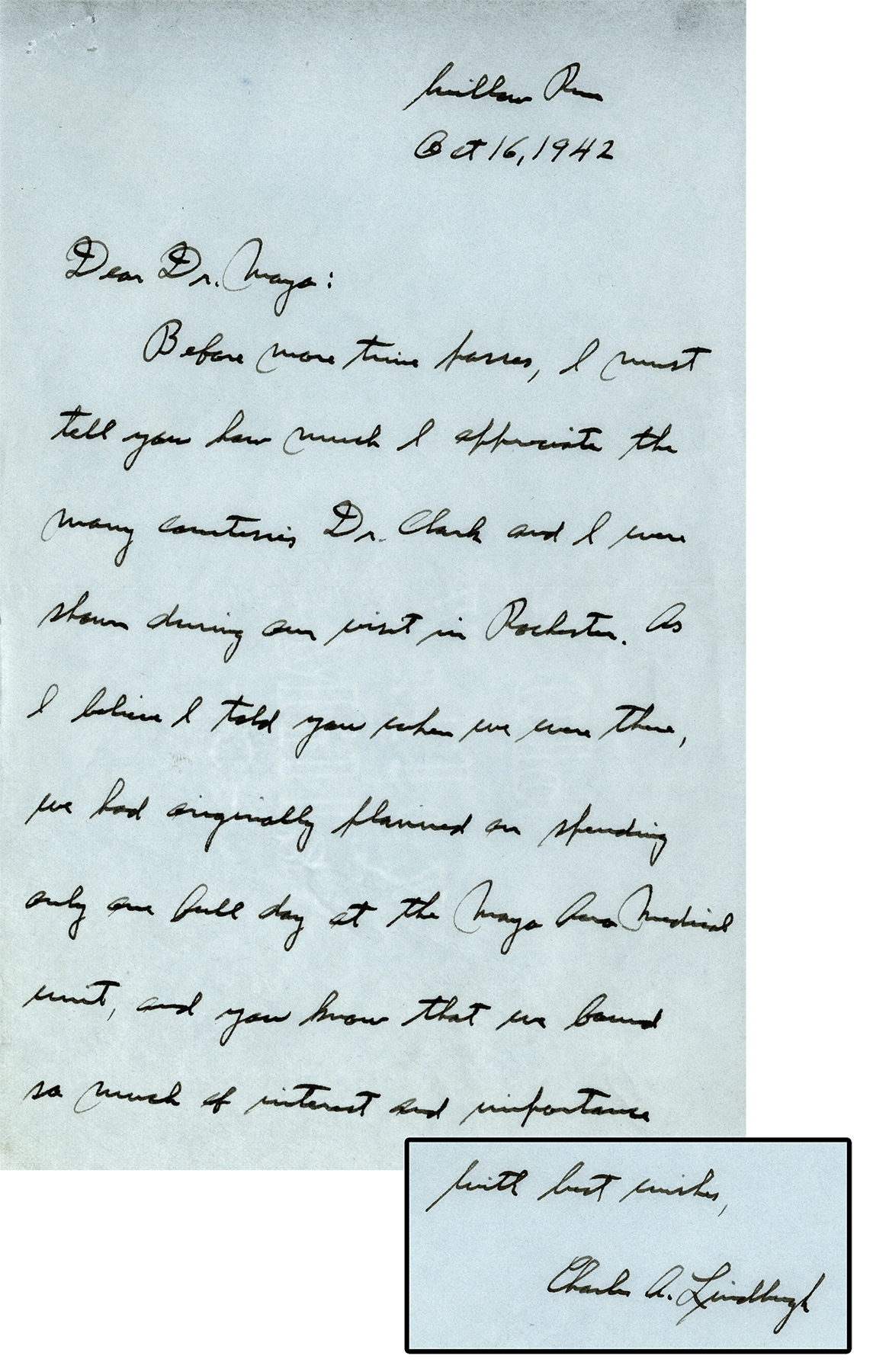 After his visit, Lindbergh wrote a thank you letter to Dr. Charlie’s son, Dr. Charles W. Mayo, dated October 16, 1942, stating, in part:  “The result of our work, however, will be of great value to us in our flying program.  We are making important changes in our oxygen equipment as a result, and I think the experiments we carried on at Rochester will save lives in the future…”  [Full transcript of letter on next slide]

Before more time passes, I must tell you how much I appreciate the many courtesies Dr. Clark and I were shown during our visit in Rochester. As I believe I told you when we were there, we had originally planned on spending only one full day at the Mayo Aero Medical Unit, and you know that we found so much of interest and importance that we imposed on Dr. Boothby to the extent of remaining to carry on experimental work in the altitude chamber for nearly two weeks. The result of our work, however, will be of great value to us in our flying program. We are making important changes in our oxygen equipment as a result, and I think the experiments we carried on at Rochester will save lives in the future—when or how many it is, of course, impossible to know.

I shall write Mrs. Mayo to thank her for the very pleasant evening at your home. Also, I want you to know how much it meant to Dr. Clark and myself to have the opportunity of watching you operate that morning at the hospital. Thank you very much for arranging it.

Please let us know if you ever happen to be passing through Detroit and have time to go through our plant here at Willow Run.

Bailout bottles contained a supply of oxygen for an individual parachuting from an airplane.  The end of the tube not connected to the bottle could be attached to the face mask.  The bottle was kept in a leg pocket of the individual’s flight suit or secured in place on the leg.  In the previous photograph of Charles Lindbergh, a bailout bottle is attached to his harness at the shoulder by what seems to be temporary straps, which may have been an experimental position.

The studies conducted at Mayo’s Aero Medical Unit were considered top secret and only individuals vetted by Mayo Clinic’s Security Section were allowed access to the Unit.  Specific Mayo staff members were issued photo identification cards that were required for admission. Even Dr. Donald Balfour, who was Dr. Will Mayo’s son-in-law and the Chair of the Mayo Clinic Board of Governors, carried this card. 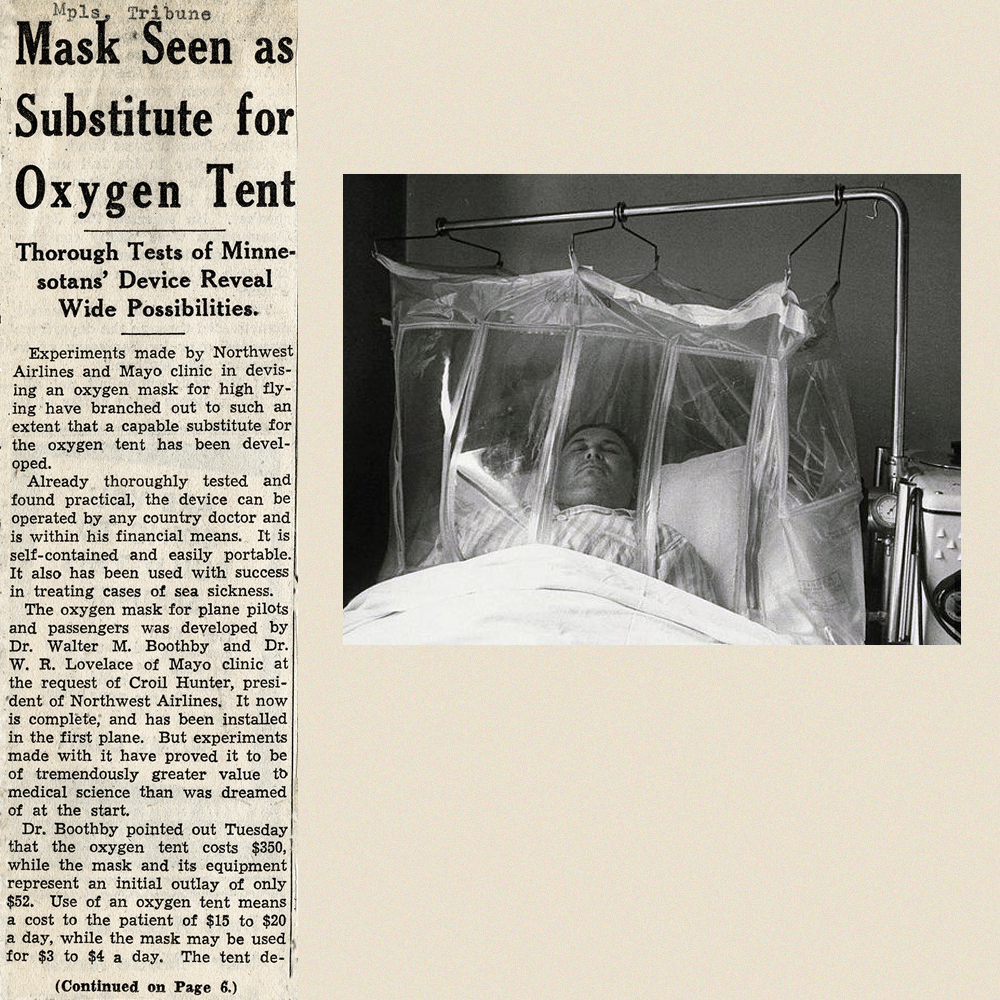 The Aero Medical Unit’s work to improve oxygen delivery systems had an equally long-term and important impact on medicine. This clipping from the Minneapolis Tribune in March 1939 describes how the mask would improve patient care by replacing the oxygen tent. Not only would oxygen delivery be more efficient, it also would be portable and less expensive to provide. 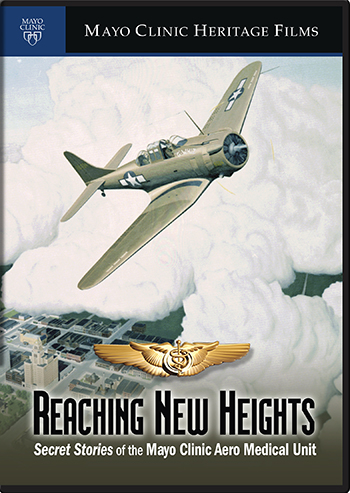 Reaching New Heights, a documentary created by Mayo Heritage Films in 2011, highlights the work of the Mayo Aero Medical Unit.  It can be viewed on the Mayo Clinic History & Heritage website.