Civil Defense at Mayo Clinic During the Cold War

During the Cold War (1947-1991), the United States and the Soviet Union were engaged in a nuclear arms race. The threat of nuclear war was a real fear, particularly in the 1950s and 1960s. Although Rochester was not considered a potential target for a nuclear bomb, its proximity to the Twin Cities (considered a major target) made it necessary to prepare for nuclear war. Not only would Rochester need to be prepared to survive nuclear fallout, but it would need to be ready to shelter and administer aid for up to 95,000 evacuees from the Twin Cities.

This header was taken from a Civil Defense Bulletin issued by Mayo Clinic on September 29, 1961. It was the first of six bulletins issued, providing updates and information to Mayo Clinic employees. 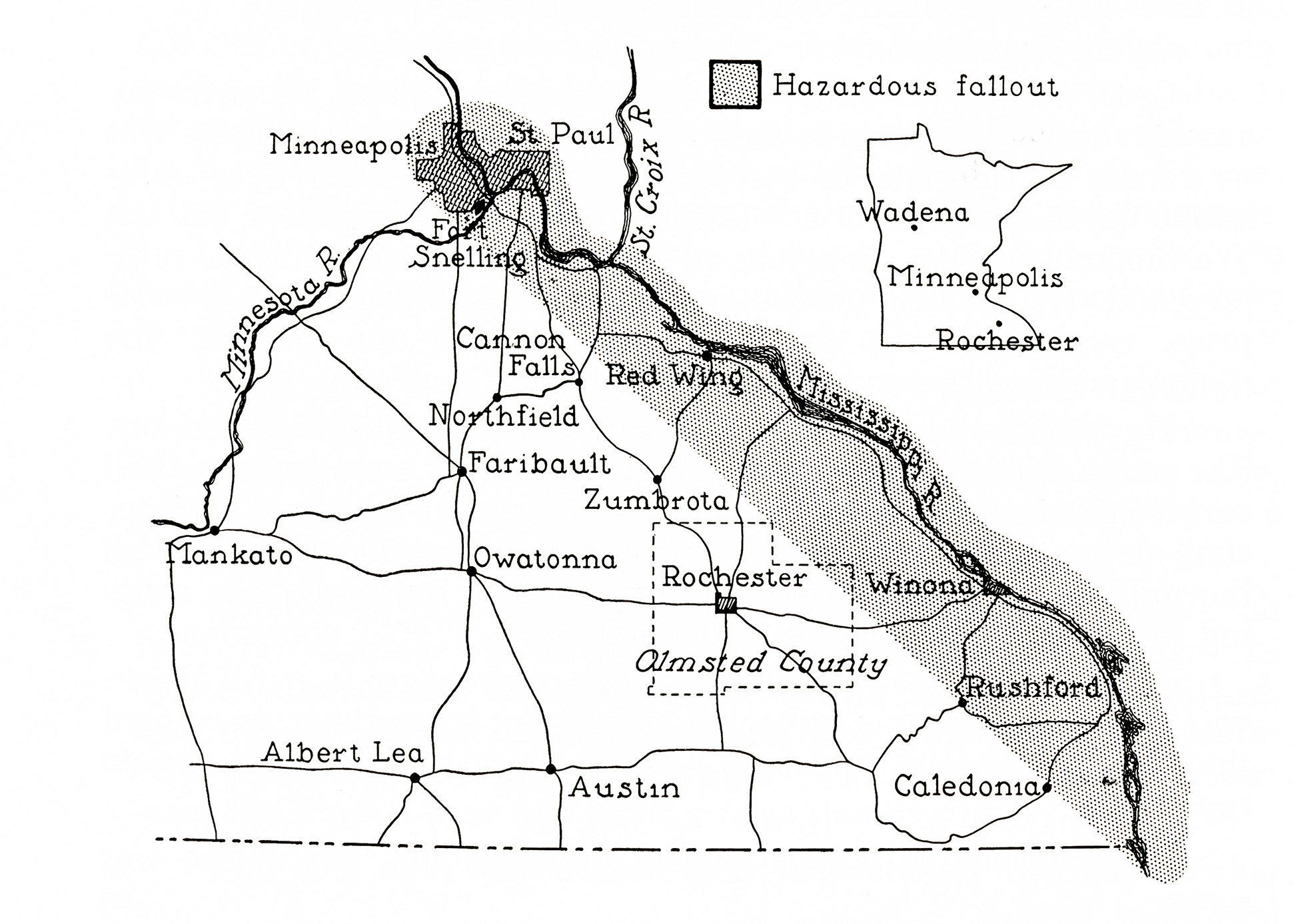 This map, taken from a March 1958 article in Mayo Clinic Proceedings (vol. 33, no. 6), shows the approximate route of hazardous fallout from a hydrogen bomb if exploded over Fort Snelling.

Mayo Clinic’s Disaster Committee, created in 1956 and chaired by Dr. John C. Ivins, was charged with organizing the Clinic’s disaster medical care program. This included planning for mass casualty events with particular emphasis on the continuing risk of thermonuclear warfare. 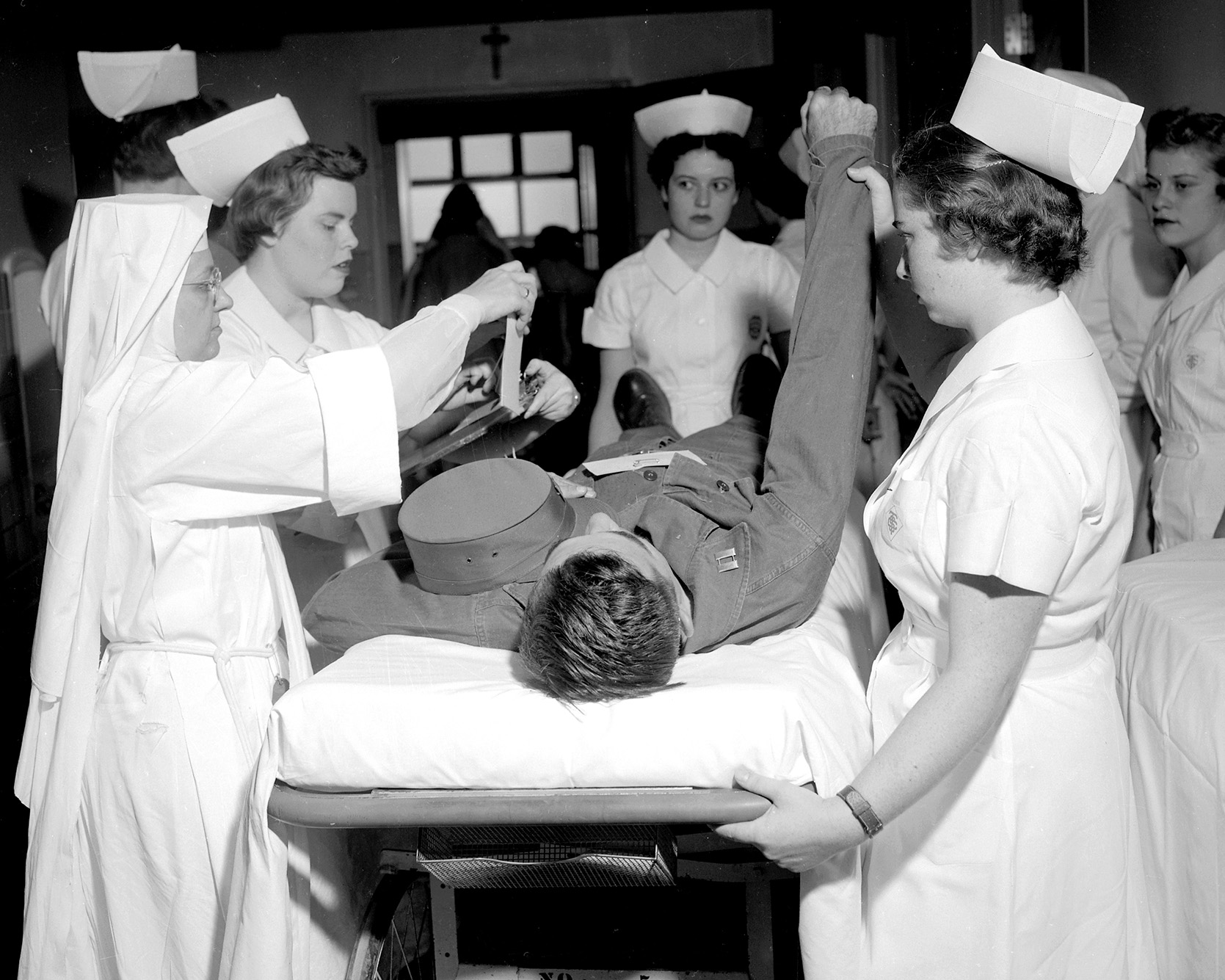 Nursing staff at Saint Marys Hospital participate in a drill of disaster PLAN A on October 13, 1956. Boy Scouts and members of the Military Police Reserve Unit served as fake victims, each pinned with a card stating their injuries. 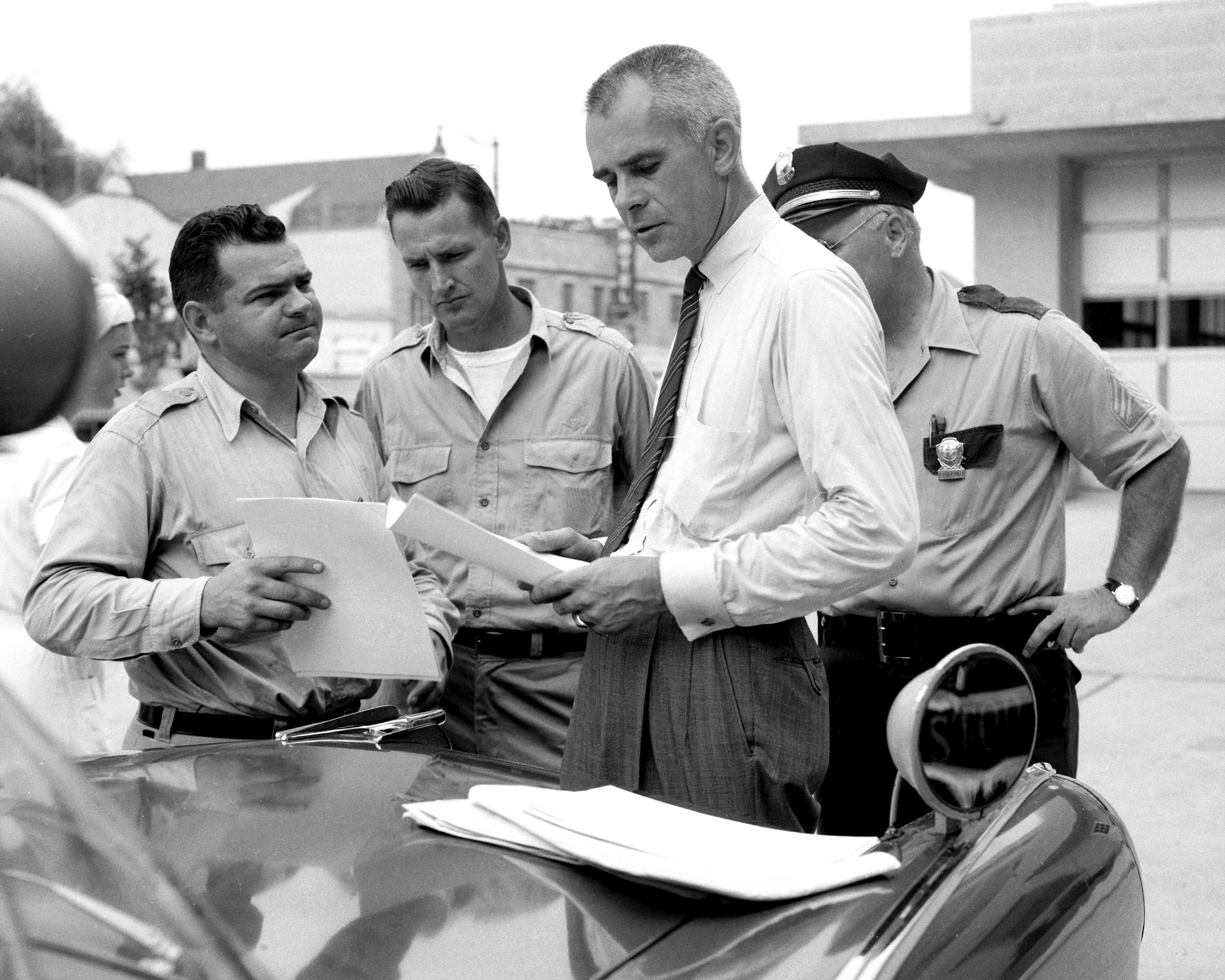 Dr. John Ivins speaks with Rochester firemen Lyle Gardner and Lyle Bateman during a Traveling Disaster Squad meeting on July 11, 1957, in preparation for the first PLAN B drill. 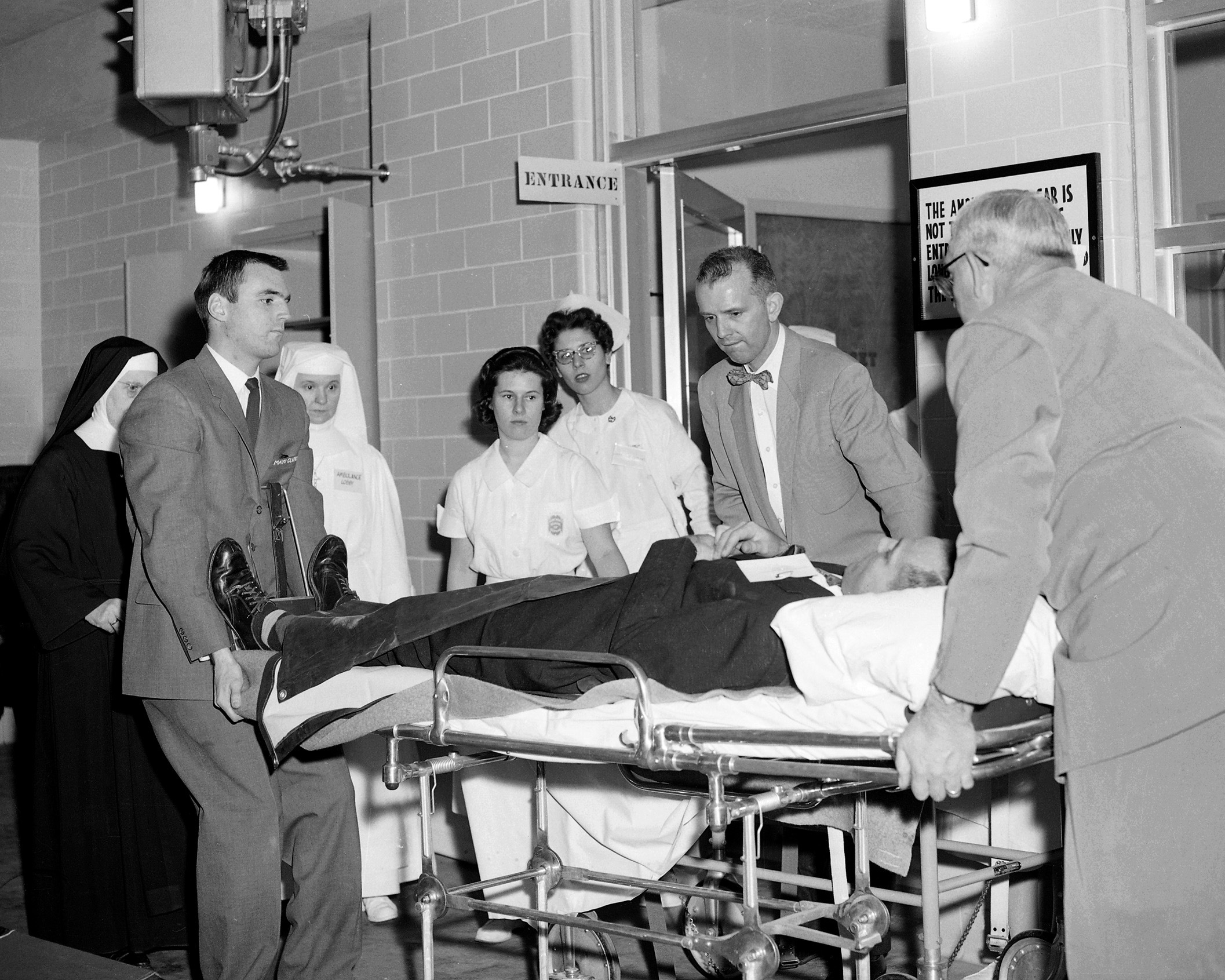 Another PLAN A disaster drill, in conjunction with IBM, occurred on November 21, 1958. This drill simulated a fire at IBM involving 70 victims. Rescue teams located and treated patients in the IBM building. Others were transported by ambulance during rush hour to Saint Marys where they were further triaged for care. 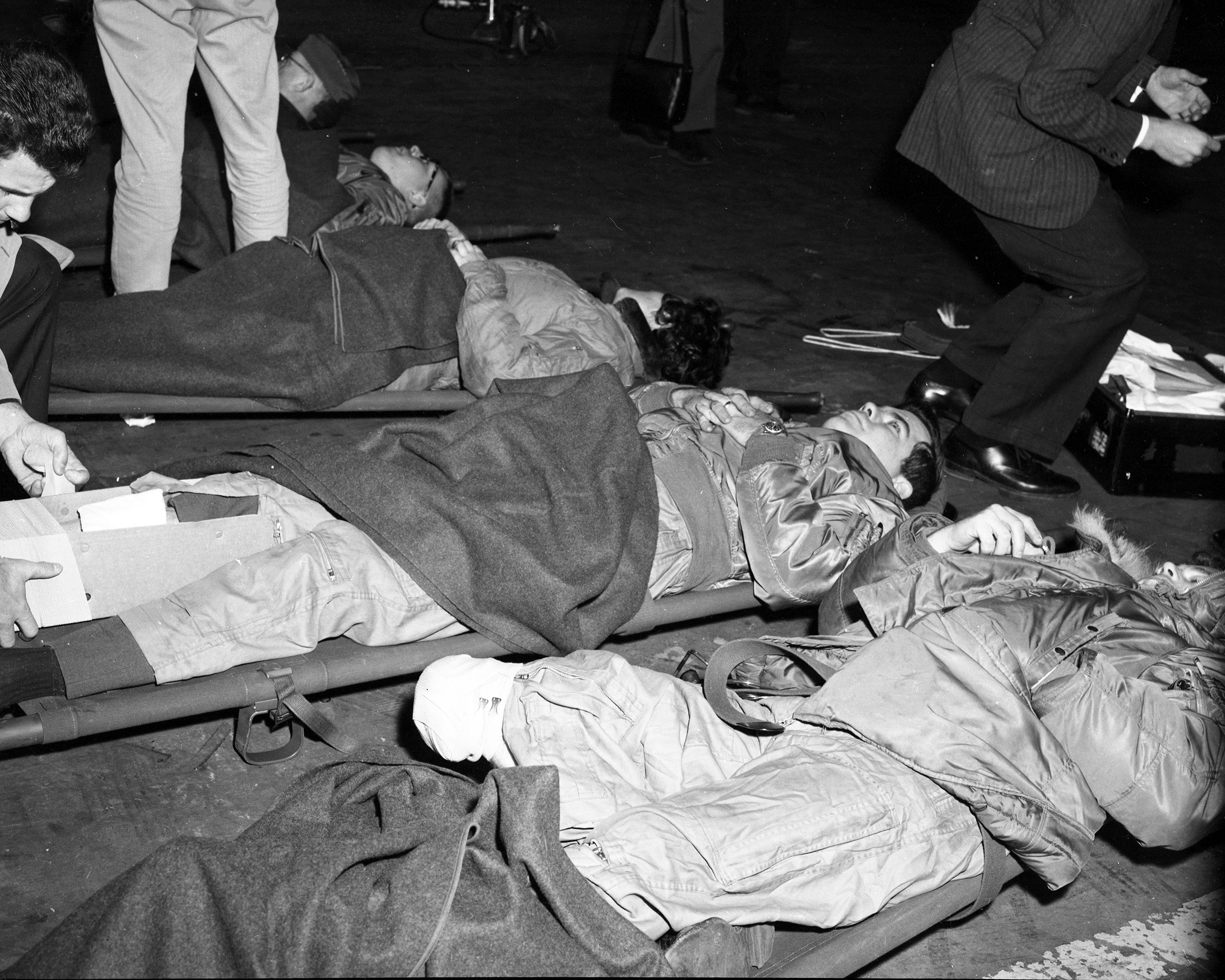 An Air Force C-97 transport plane made a surprise landing in Rochester on December 8, 1962, carrying 50 Air Force reservists posing as wounded men from a bombed Washington, D.C. The PLAN A trial was one of the largest combined civilian and military exercises ever staged in Minnesota and was deemed “highly successful” by Air Force, Saint Marys, and Mayo Clinic observers. 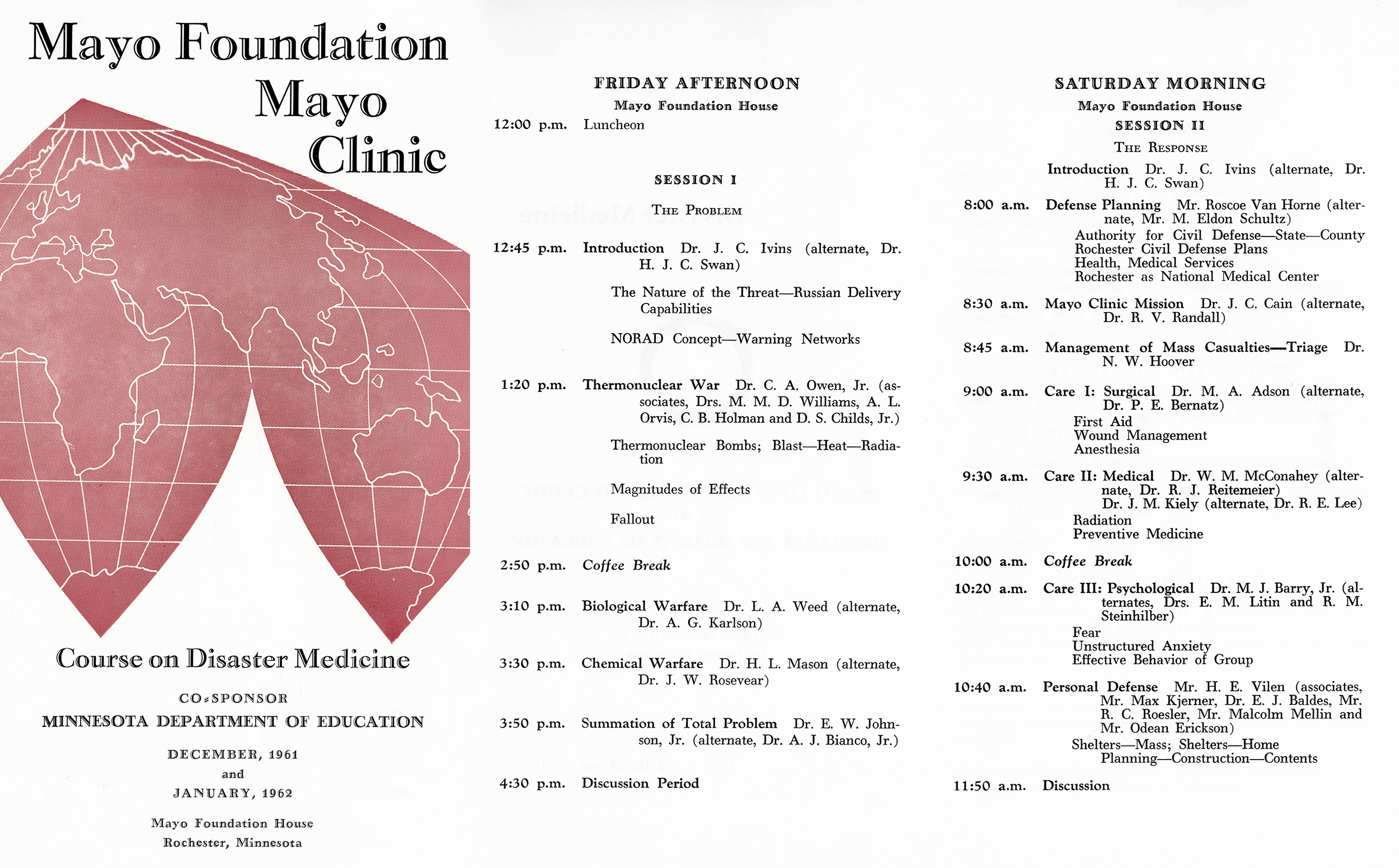 In 1961, Rochester was named a national medical emergency center for up to 50,000 victims. Mayo Clinic and Saint Marys began intensive training programs to prepare for this responsibility. Each year, 200 Saint Marys employees enrolled in a Civil Defense Survival Preparedness course. Other courses offered to employees included Shelter Management, Radiological Monitoring, and Disaster Medicine.

This photograph shows a casualty simulation kit used at Mayo Clinic, complete with prosthetics to simulate a variety of injuries.

Close up of a hand with radiation burns from the casualty simulation kit. 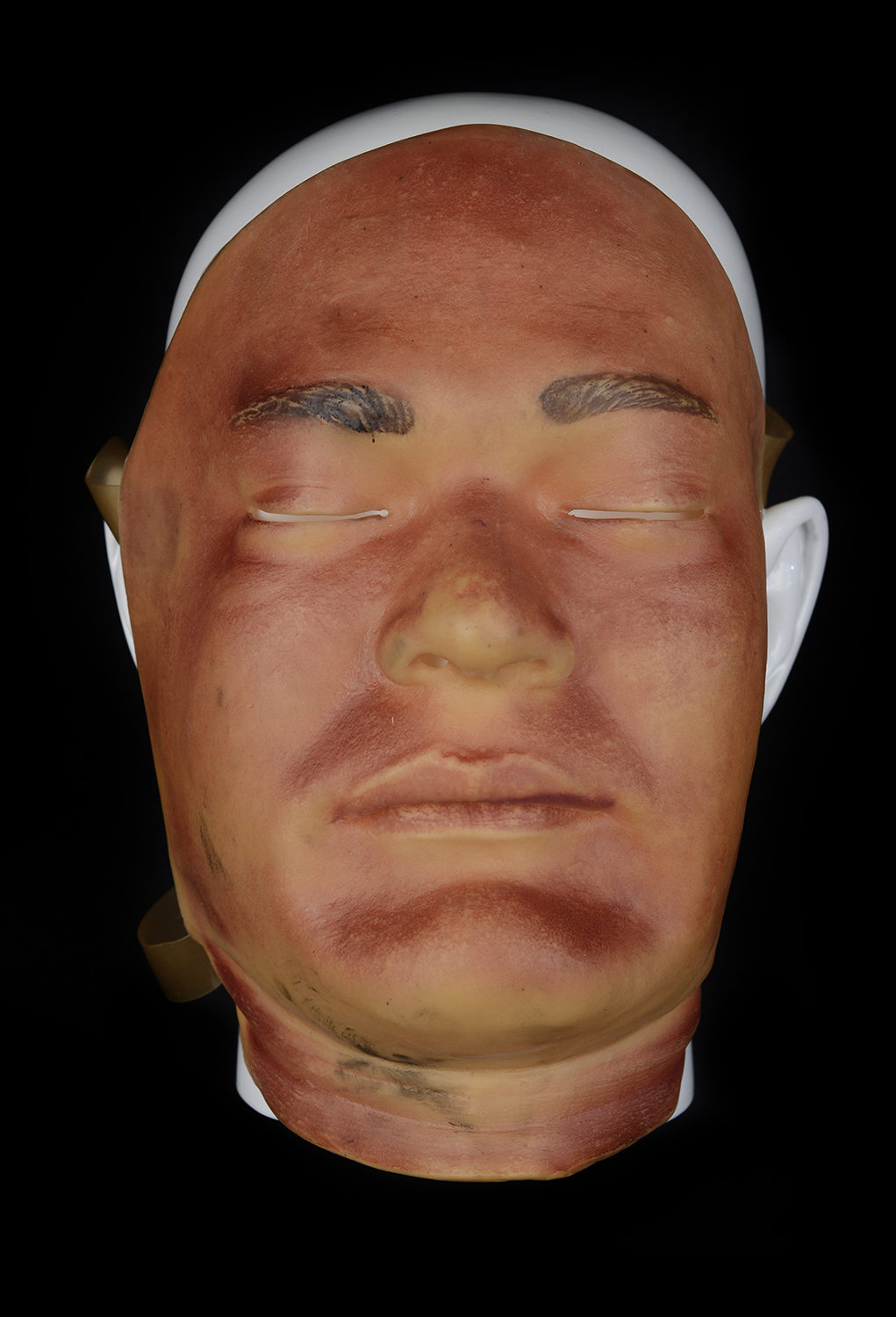 Close up of a face with radiation burns from the casualty simulation kit.

If there was ample warning prior to a nuclear attack, plans called for a mass evacuation of Twin Cities residents, with 95,000 of them being routed to Rochester and Olmsted County. Rochester needed to create large community fallout shelters and be ready to expand its hospital bed capacity.

The Office of Civil Defense provided Rochester with five 200-bed emergency hospitals which were housed in large crates. Many of these were stored in the basement of Assisi Heights, the Motherhouse of the Sisters of St. Francis. In case of nuclear war and fallout, Saint Marys Hospital, Rochester Methodist Hospital, and Olmsted Community Hospital would be utilized for the first treatment phase. Saint Marys would be expanded from a 1,000 bed hospital to a 5,000 bed hospital. Facilities at other hospitals would be similarly expanded. After several days of emergency treatment, patients would be moved to either the Rochester State Hospital (5,000 bed capacity) or Assisi Heights (10,000 bed capacity). The third echelon of treatment for “late convalescent” patients would be carried out in churches, schoolhouses, and other public buildings. 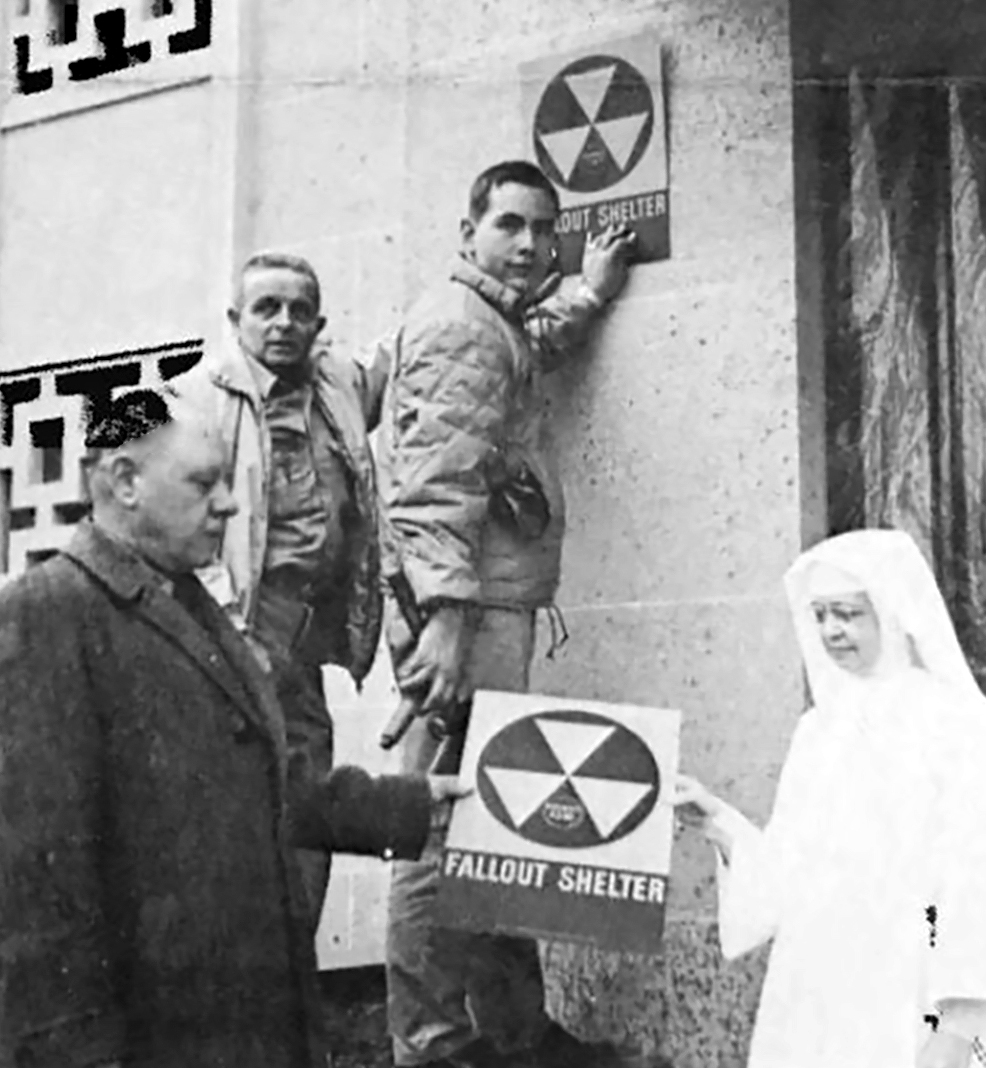 In this photo from 1962, Sister Raymunda, Chairman of Saint Marys Disaster Committee, is fastening a Fallout Shelter sign to the Domitilla Unit entrance. With her (from L-R) are Gregory Fitzgerald (Civil Defense engineer with the Corps of Engineers), Harvey Stellmaker (Saint Marys maintenance), and Terry Stejskal (Corps of Engineers).

The city of Rochester and Mayo Clinic encouraged residents and employees to build their own family fallout shelters and provided classes and plans on how to build and stock them. In October of 1961, Civil Defense Authorities estimated that several hundred home fallout shelters had already been constructed in Rochester. 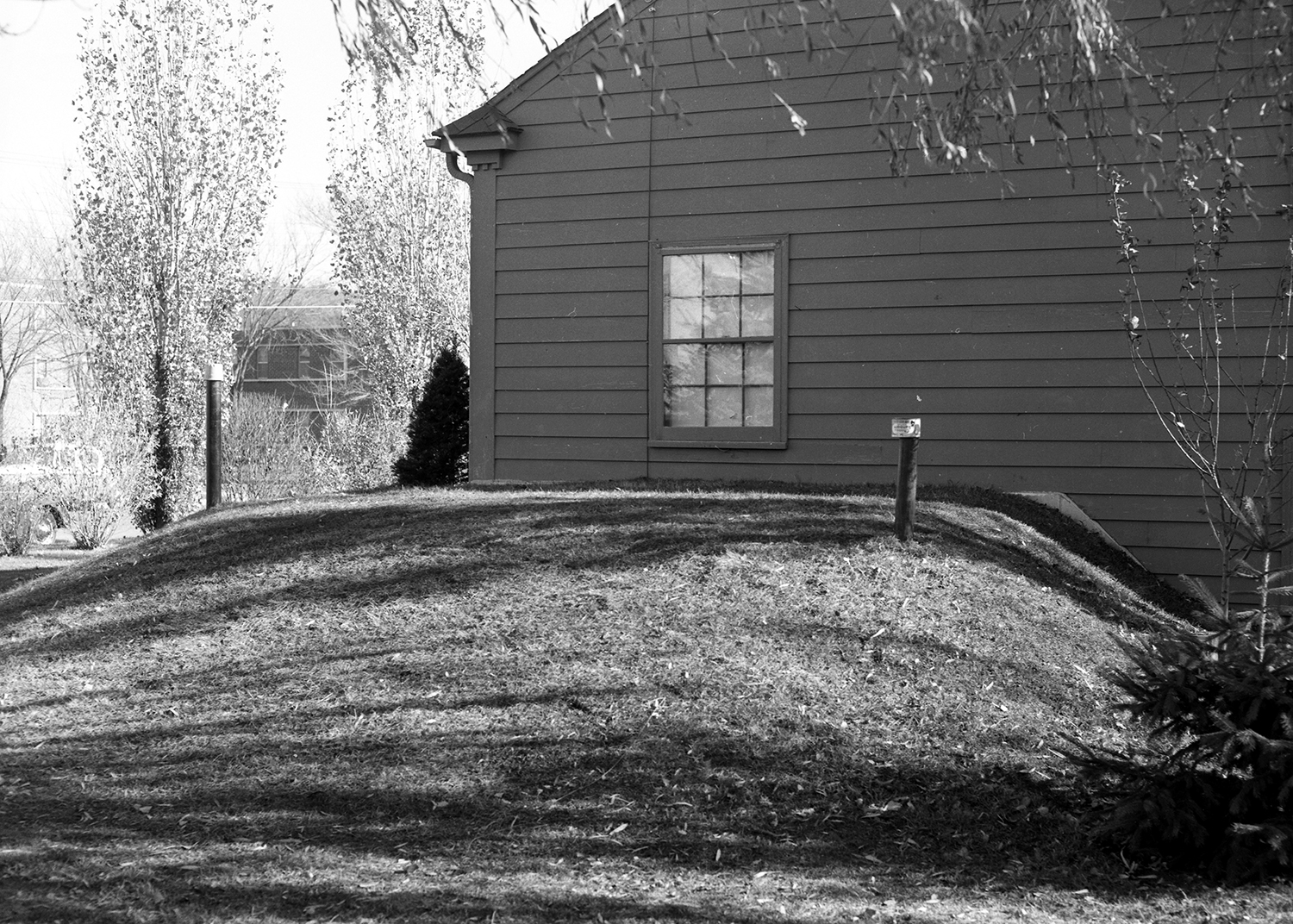 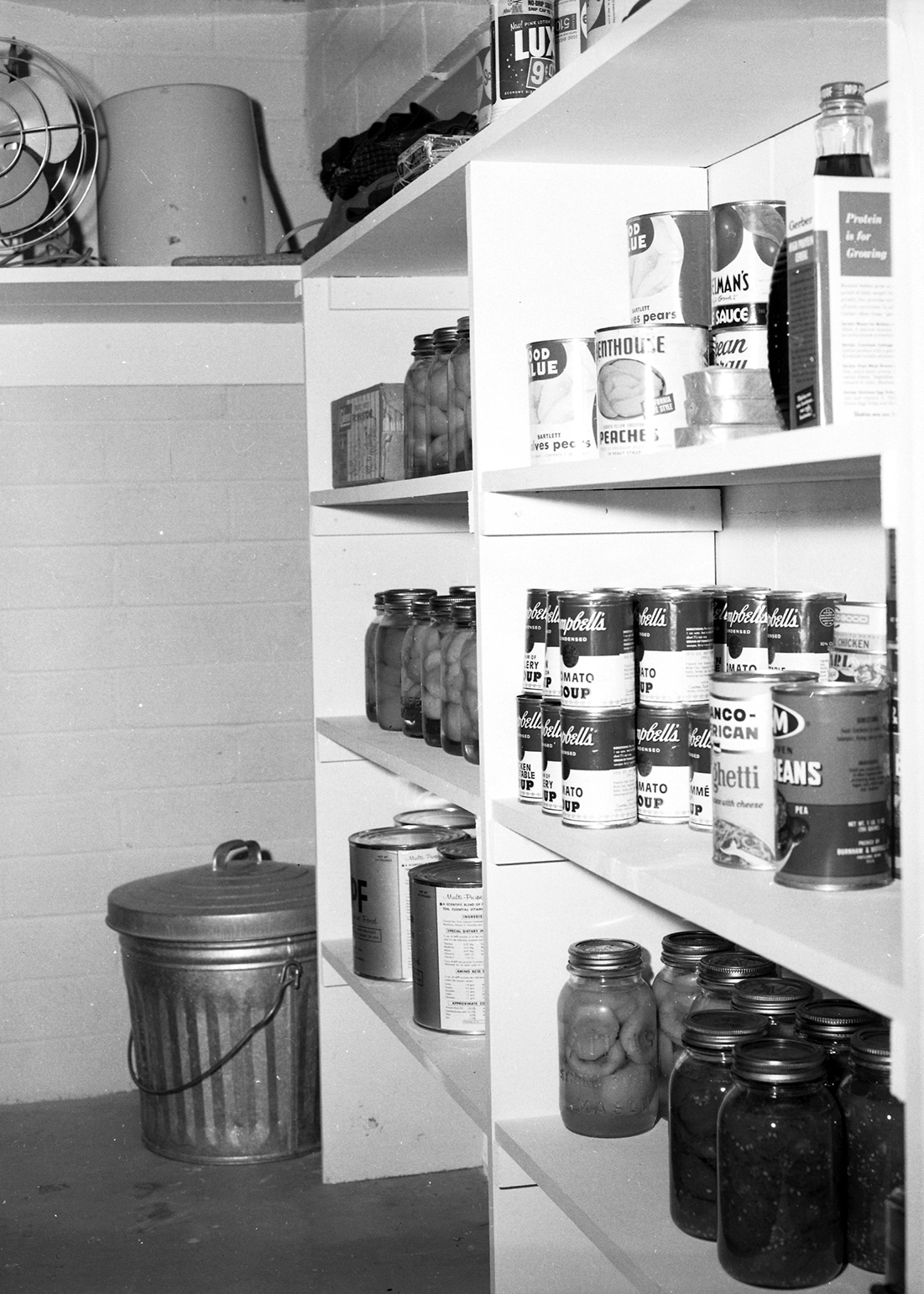 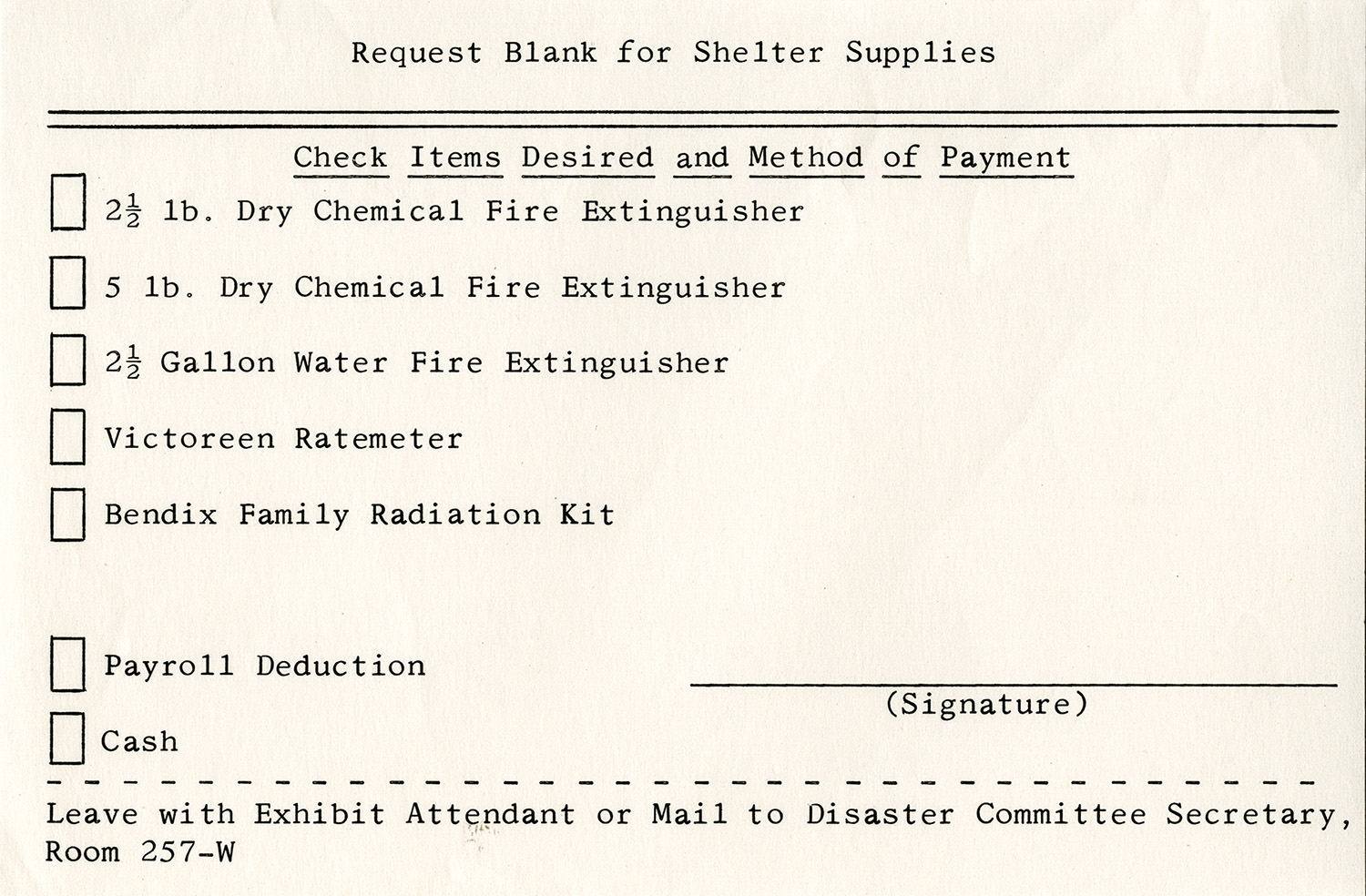 Mayo Clinic sold supplies recommended for family fallout shelters that were difficult for people to procure on their own. As shown in the form above, items could be purchased via cash or payroll deduction. The Victoreen Ratemeter and Bendix Family Radiation Kit are both pictured below. 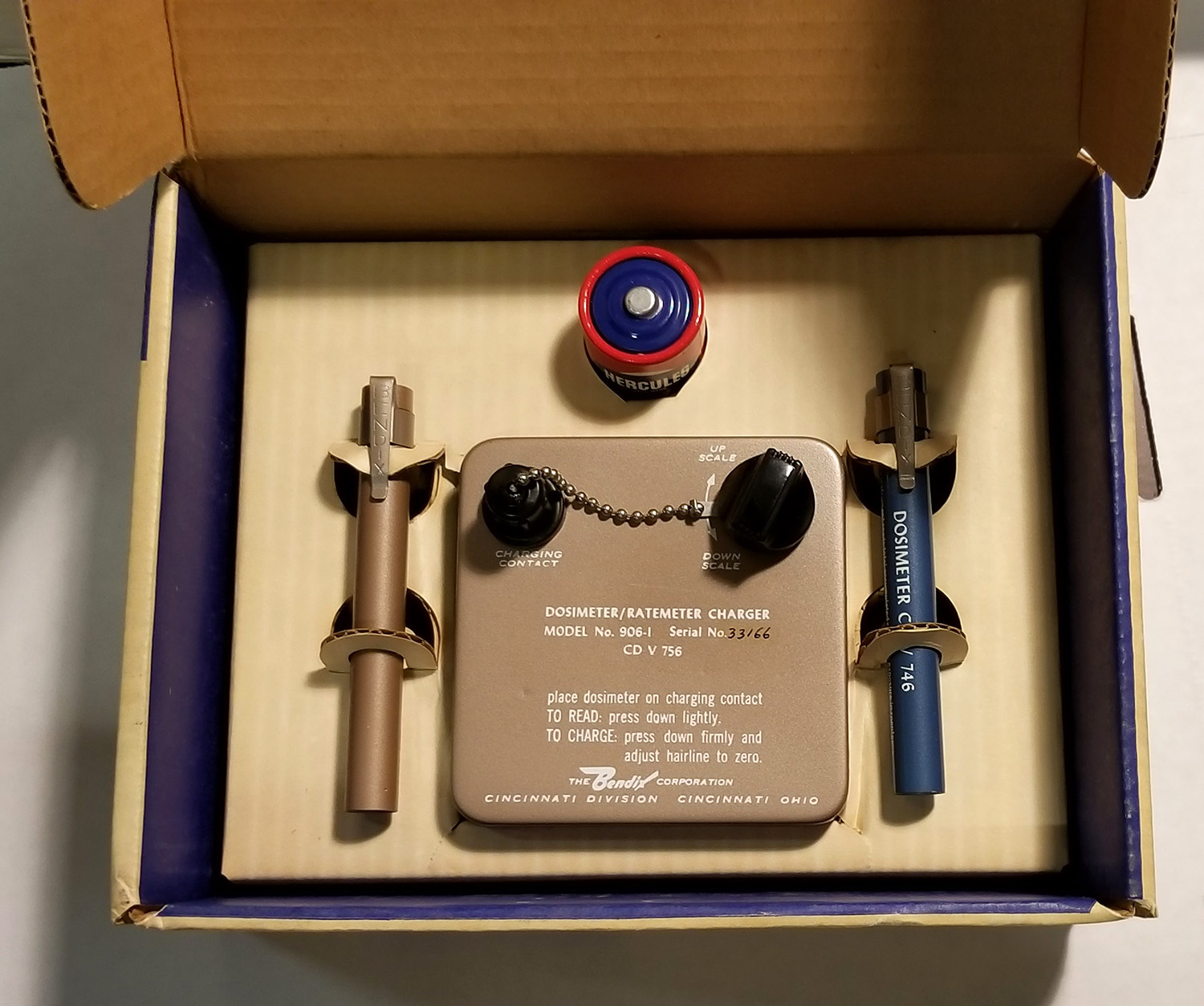 The Bendix Family Radiation Kit included a dosimeter, a ratemeter, a charger and a battery. According to the instruction manual, they “can provide you with vital information about fallout radiation in the event of a nuclear attack.” It was one of the first commercially available radiation detection instruments that was both inexpensive and easy to use. The ratemeter was placed in an area of possible radiation and gave a dose rate in roentgens (a unit of measurement for exposure to radiation). The dosimeter measured the total amount of radiation exposure on a scale of zero to 600 roentgens and could be clipped to a belt or pocket. Mayo Clinic charged employees $17.50 for one kit. 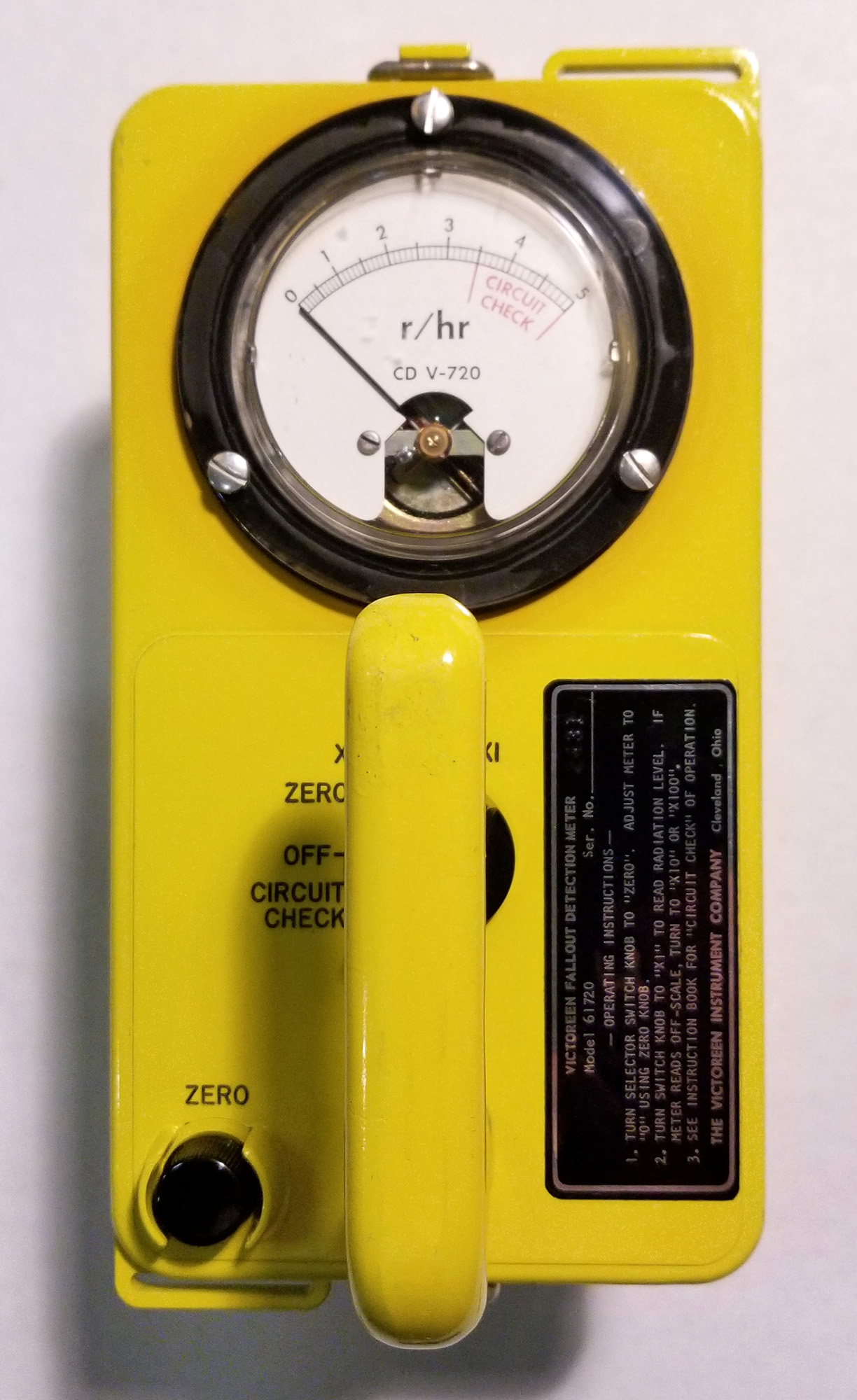 The Victoreen Fallout Detection Meter was a civilian version of the official fallout detection meter sold to the government by the Victoreen Instrument Company. According to advertisements, this ratemeter “tells you at a glance the rate of exposure at moment of exposure…helps you seek a safe refuge immediately.” Mayo Clinic charged employees $30.90 for these ratemeters. 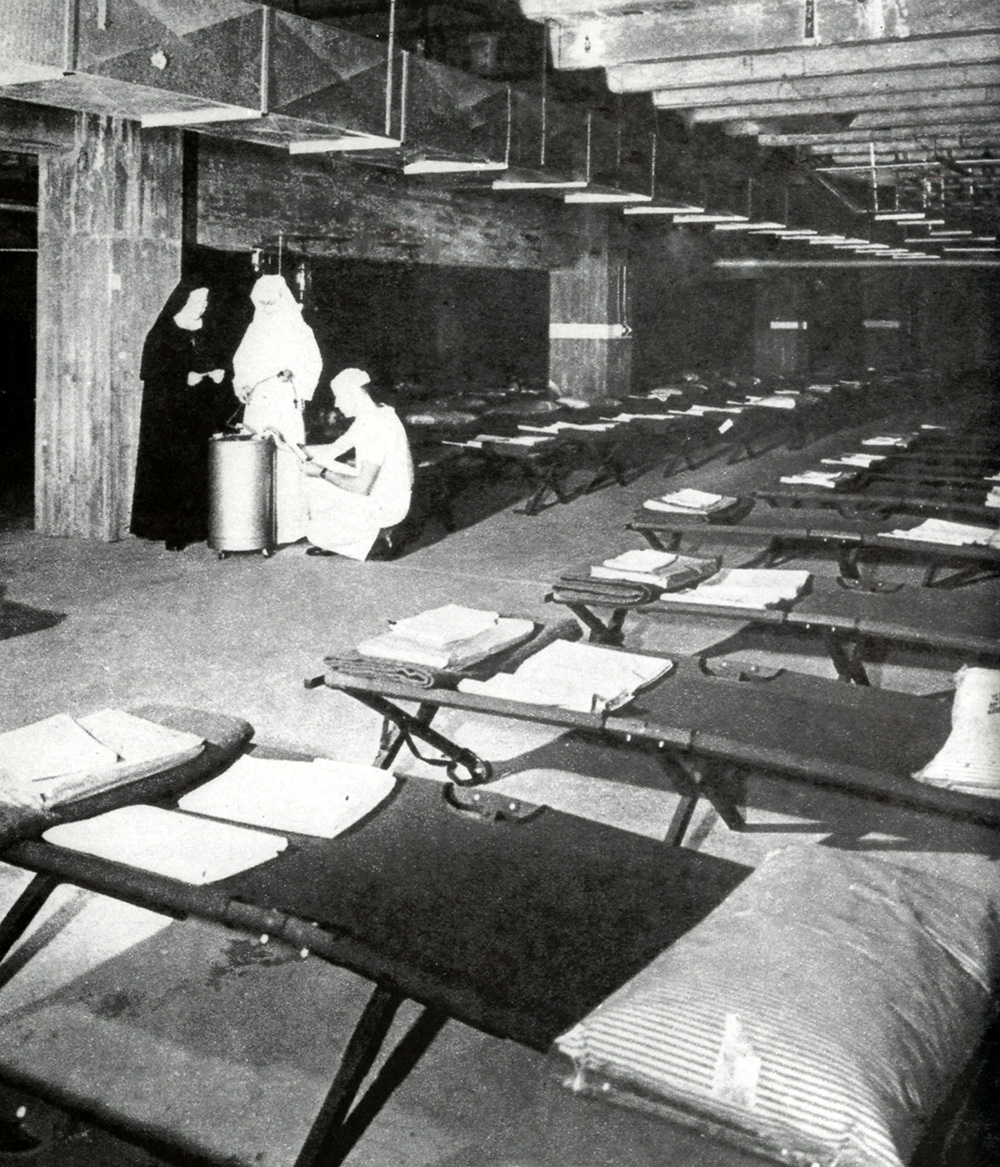 A quota of 31,714 men, women and children was assigned to the fallout shelter in the Franklin Complex in downtown Rochester. This included the Mayo, Plummer, Harwick, and Damon buildings; Franklin Heating Station; Rochester Methodist Hospital; and the Zumbro and Kahler Hotel. The Franklin Heating Station and the Mayo Building’s ventilation system were modified to function effectively during a period of fallout. 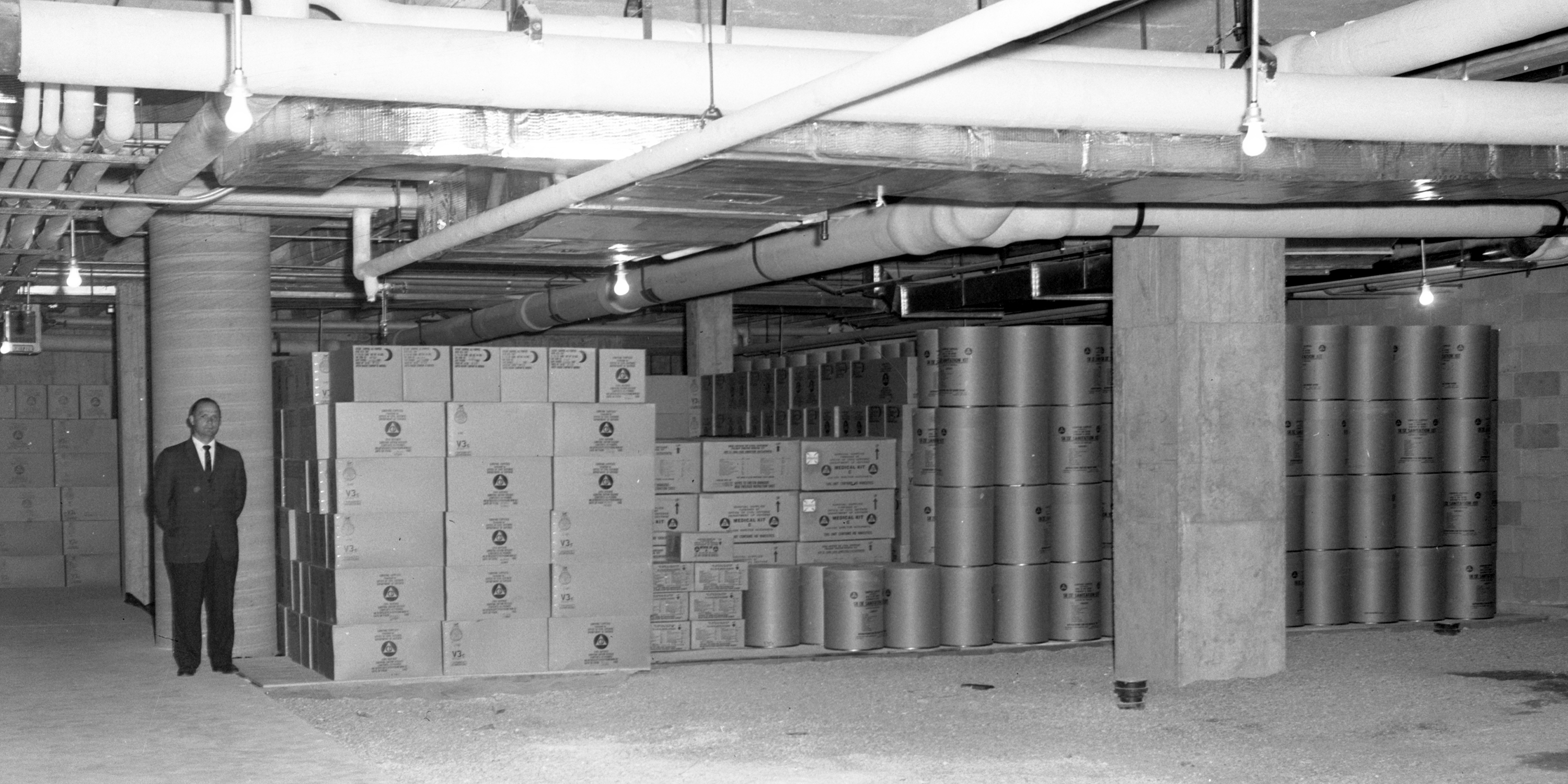 Disaster Committee member Hilton E. Vilen inspects a portion of the 233,958 pounds of Civil Defense supplies delivered to the Damon Building basement in August of 1963. The shipment included 3,641 cases of biscuits, 667 sanitary kits and 107 kits of medical supplies. 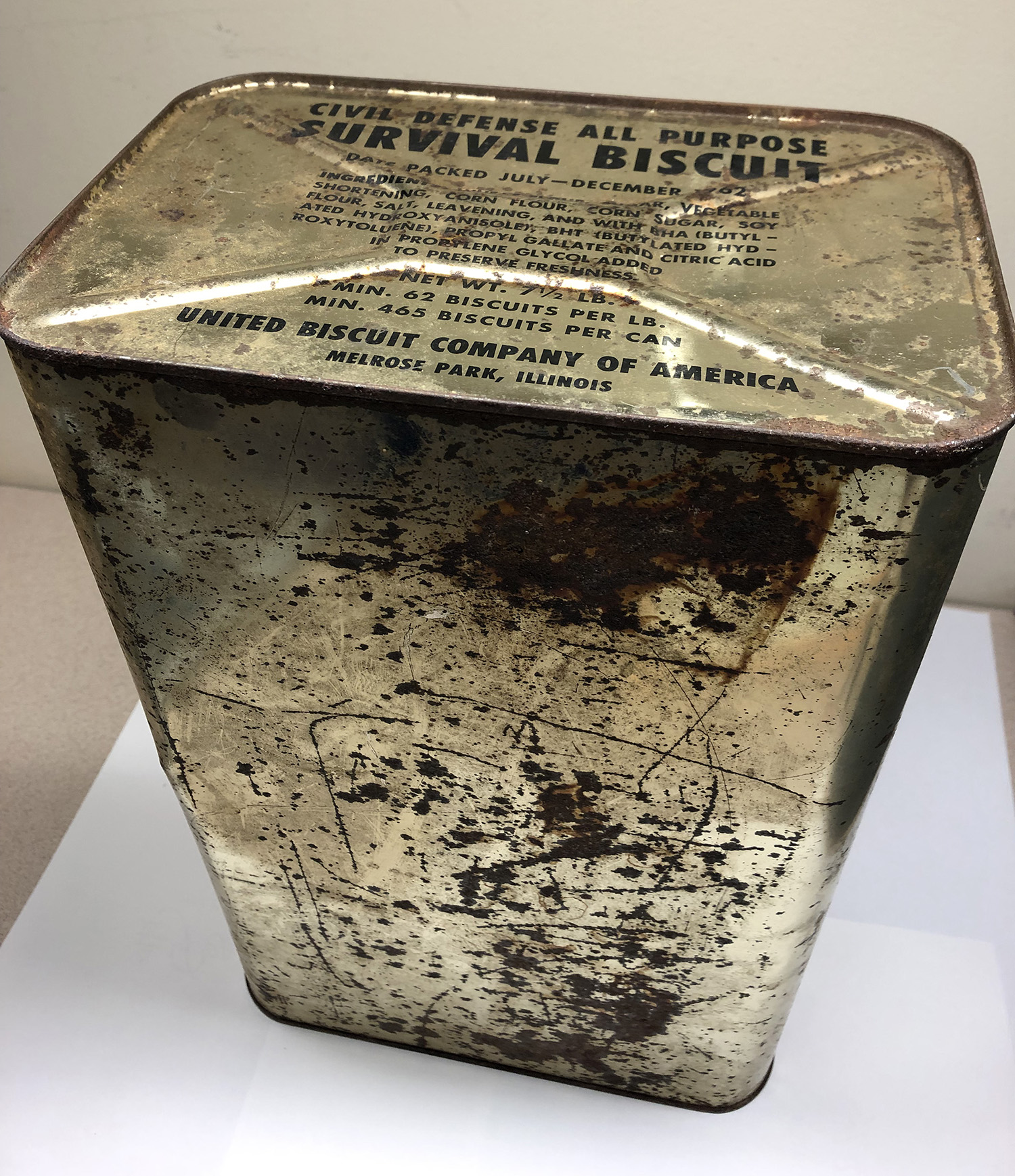 This tin of Civil Defense All Purpose Survival Biscuits was found while the city was doing repair work on a burst water main in July of 2019. The water main was located between the Franklin Heating Station and the Hilton/Guggenheim Building, where a fallout shelter used to exist in a subway tunnel connecting the Franklin Heating Station to Worrall Hospital. The date on the tin states it was packed in 1962. No expiration date is listed.